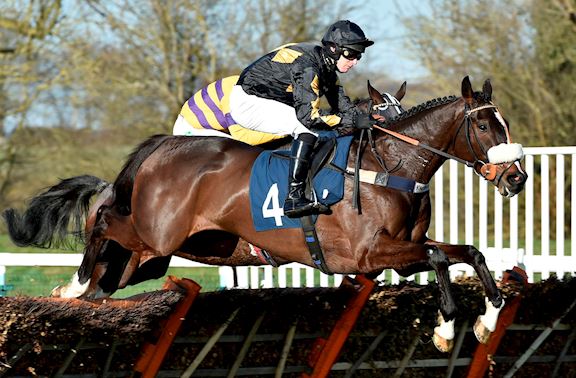 They watched as an ownership group from The Jockey Club – which runs the Cambridgeshire track – celebrated victory with their horse Hes No Trouble in the MansionBet Novices’ Hurdle at 15-8.

There were about 20 members of the syndicate on course to see jockey David Bass complete a stylish victory.

Clondaw Castle is now favourite for the Close Brothers Novices Handicap Chase at the Cheltenham Festival next month after the Tom George-trained 8-11 favourite won the MansionBet Chase.

Hear The Chimes won at the corresponding meeting at Huntingdon four years ago and the ten-year-old returned to the track to take the MansionBet Handicap Hurdle at 12-1 under jockey Sam Twiston-Davies.

The champion jumps trainer Nicky Henderson has a great record with his horses at Huntingdon and he landed the concluding MansionBet Mares’ Maiden Hurdle with the 6-4 market leader Loveherandleaveher.

*The next meeting at Huntingdon Racecourse is on Sunday, 3rd March – a Family Fun Day when the feature race is the Cambridgeshire National. Advance purchase of adult tickets is just £13 (£25 for a family ticket). Tickets can be purchased at http://huntingdon.thejockeyclub.co.uk or by calling 0844 579 3007.