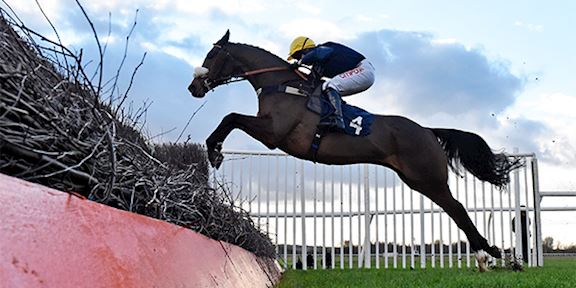 2nd December 2019 – The last two winners of the Fitzdares Peterborough Chase could oppose each other on Sunday as Huntingdon Racecourse marks 50 years of its showpiece race.

Charbel, the victor 12 months ago, is one of 16 horses entered for Sunday’s feature Grade 2 contest at the Cambridgeshire track, along with Top Notch who took the honours in 2017.

A stellar line-up is in prospect as British and Irish-trained horses target the £65,000 race.

Trainer Gordon Elliott, who has sent out Tiger Roll to win the Randox Health Grand National at Aintree for the last two seasons, has entered Alpha Des Obeaux, owned by Ryanair boss Michael O’Leary, with the horse seeking a first win outside Ireland.

As well as Top Notch, Nicky Henderson – who has sent out the winner of the race on no fewer than six occasions – has entered three other horses, including the high class Might Bite, Exeter Racecourse Haldon Gold Cup winner Janika and Theinval.

Trainer Warren Greatrex has entered La Bague Au Roi who has won 14 of her 21 starts, while the North has a strong contender in Grade 1 winner Waiting Patiently from the Yorkshire stables of Ruth Jefferson.

Alan King will have high hopes for Sceau Royal, who initially made his name winning over hurdles at Huntingdon, while Venetia Williams’ Cheltenham Festival Ryanair Chase runner-up Aso will come in for support.

“We are thrilled by the quality of the entries for this year’s Fitzdares Peterborough Chase. Sunday is going to be a very special occasion for us as we mark 50 years of the race most famously associated with Huntingdon Racecourse.

“Some of the most famous racehorses of the last 50 years have contested the race, including the legendary Desert Orchid, Edredon Bleu, Best Mate, Wayward Lad and One Man.

“We are also delighted to welcome a new sponsor – luxury bookmaker Fitzdares – in 2019 for our most showpiece race of the year.”

If the winner of this year’s race goes on to victory in the Ladbrokes King George VI Chase at Kempton Park on Boxing Day and the Magners Cheltenham Gold Cup in March, a £500,000 bonus courtesy of new sponsor Fitzdares will be triggered. That feat has been achieved once before – by Best Mate in the 2002/3 jumps season.

Racing is due to begin at 12.30pm on Sunday. The Fitzdares Peterborough Chase is at 2pm. Gates open at 10.30am.

A special Family Festive Package is available for purchase. For £19, there are two adult tickets – with up to four children admitted free of charge – two sweet bag vouchers and a racecard voucher. Regular advance admission for adults is £19. Tickets can be bought at https://www.thejockeyclub.co.uk/huntingdon or on 0844 579 3007.

On all racing days, accompanied children aged 17 years and under are admitted free of charge. Young adults, aged 18 to 24 years, can get half-price admission by registering at RacePass18to24.co.uk to receive a free RacePass membership card. Senior citizens receive £5 discounted admission on the day.

This month witnesses the 50th anniversary of the most famous steeplechase run at Huntingdon Racecourse.

The inaugural Peterborough Handicap Chase took place in December 1969 and, since then, some of the most famous names in jump racing have been victors.

The race meeting was a new one after Huntingdon’s fixtures had been increased from six to nine for the 1969/70 season. The contest remained a three-mile handicap chase until 1977, after which it became a conditions chase over two-and-a-half miles. The race became known as the Peterborough Chase in 1979.

The Grade 2 chase remains one of the most sought-after prizes in jump racing and is always a showpiece occasion in the jumps calendar at Huntingdon.