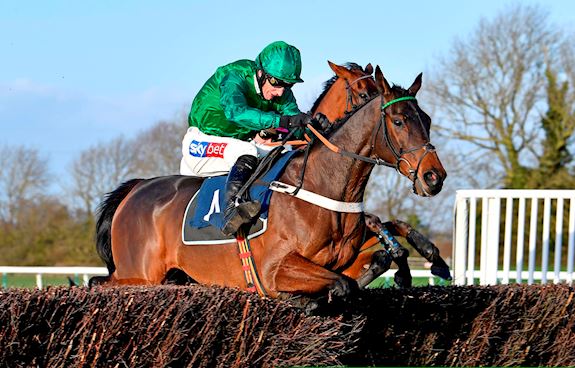 The favourite Top Notch landed the Fitzdares Peterborough Chase for the second time as Huntingdon Racecourse marked 50 years of its most famous race.

The eight-year-old horse, who won in 2017 when the Grade 2 race was transferred to Taunton Racecourse because of bad weather, gave Nicky Henderson his seventh triumph in the two-and-a-half mile contest and the trainer is now just one away from equalling Henrietta Knight’s record of eight victories. Indeed, Top Notch could back at the Cambridgeshire track in 12 months to go for a third win.

Jockey Daryl Jacob made his challenge two fences from home on the winner, seeing off the effort of the 100-1 outsider Kauto Riko.

The new sponsor Fitzdares has put up a £500,000 bonus for any horse to win the Peterborough Chase, the Ladbrokes King George VI Chase at Kempton Park on Boxing Day and the Magners Cheltenham Gold Cup next March. That feat was accomplished by Best Mate in the 2002-03 season, but Top Notch doesn’t hold an entry for the Christmas race and his target at Cheltenham is likely to be the Ryanair Chase.

As well as Top Notch, it was a good afternoon for favourites with three other market leaders winning their races.

The Colin Tizzard-trained Slate House, who was sent off at 4-5, came back from his fall at Cheltenham last month to land the Fitzdares Crosseys Jockey Coaching Novices’ Chase; Tea Clipper gave champion jockey Richard Johnson a winner at 7-4 in the Fitzdares Racing Welfare Handicap Hurdle; while the trainer-jockey brother partnership of Dan and Harry Skelton combined with West Cork to win the Fitzdares Lord Jim Culloty Novices’ Hurdle at 6-4.

*Huntingdon Racecourse rounds off 2019 with its traditional fixture, MansionBet Boxing Day at The Races. Adult admission is from £10, while accompanied children aged 17 years and younger go free of charge. Tickets can be bought at https://www.thejockeyclub.co.uk/huntingdon or on 0844 579 3007.