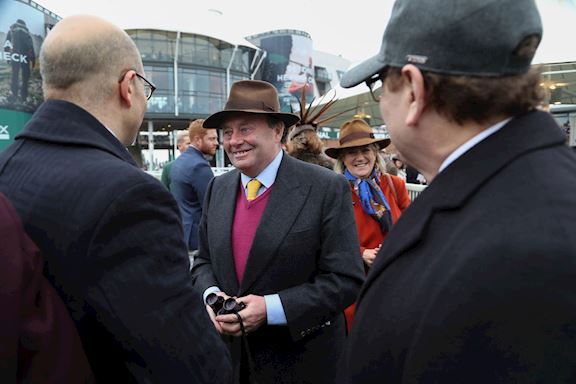 All roads lead to the Cheltenham Festival for Shishkin after an impressive win in Thursday’s Betway Sidney Banks Memorial Novices’ Hurdle at Huntingdon on Thursday.

Trained by Nicky Henderson, Shishkin came to Huntingdon at the head of many ante-post lists for the Sky Bet Supreme Novices’ Hurdle, the opening race on day one of The Festival, and did not put a foot wrong on what will be his final outing before that date with destiny.

Facing four rivals, Shishkin was sent off the 1-2 favourite and gave his supporters nothing to worry about as he strode clear to an 11-length success.

Henderson, who made the trip to Huntingdon to along with a healthy crowd of racing fans, was delighted with the young hurdler’s display and confirmed that the Sky Bet Supreme Novices’ Hurdle will be his target at Prestbury Park next month.

Speaking after the race, Henderson said: “He’s got a lot of gears, hasn’t he? He’s a beautiful horse and [that performance] is exactly what you hope for.

“These are the days you have to get out of the way and you hope not to learn anything new, because I already knew he was very good but he’s confirmed that.”

Thursday’s sponsor Betway responded to Shishkin’s win by trimming his odds for the Sky Bet Supreme Novices’ Hurdle to 3-1 (from 4-1).

Racing returns to Huntingdon on Thursday, 20 February before our Family Fun Day on Sunday, 1 March and the Festival Fever Raceday, where you can enjoy all the action from Cheltenham as well as at Huntingdon, on Wednesday, 11 March.