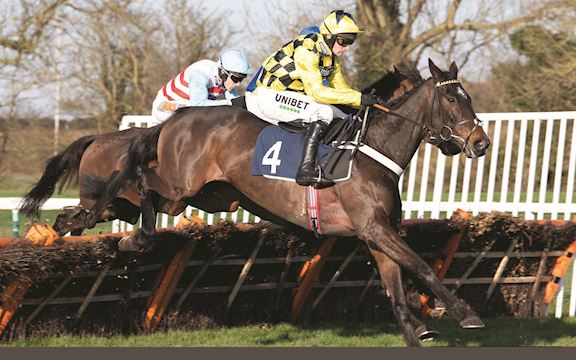 Buy your tickets now for The Festival Raceday on Wednesday 11th March - https://www.thejockeyclub.co.uk/huntingdon/events-tickets/go-racing-festival/

With Huntingdon’s rich history in showcasing future equine stars and the pinnacle of the jump season upon us, its time to focus on the achievements of those that have triumphed over the last 30 years in the Champion Hurdle, Champion and Cheltenham Gold Cup having experienced success at Huntingdon Racecourse during their illustrious careers.

Many of those can be found amongst the roll of honour for the Peterborough Chase, our big race of the season. Most recently, in November 2002, Best Mate won the Peterborough Chase four months before winning his second Gold Cup. He was also sec-ond in 2003 prior to his memorable third triumph at Prestbury Park the following March.
His stable companion, Edredon Bleu, amassed four Peterborough Chases between 1998 and 2001, in addition to his Queen Mother Champion Chase success in 2000. That was a second Festival victory having also won the Grand Annual two years previously.

The 1990’s was a fertile decade for champion chasers in the Peterborough Chase with Remittance Man victorious here eight months after his biggest win in 1992, whilst Martha’s Son won here for third time when winning in 1994. He was also second in 1995 to Travado and pulled up in 1997, the same year as his Festival win, which was his final outing. The 1997 renewal was won by One Man, who finally won at the Cheltenham Festival that season after failing to see out the trip in an RSA Chase and two Gold Cups, bounding up the hill to win the Champion Chase.

The most recent champion chaser to have raced here was Voy Por Ustedes, who made a winning British debut in January 2005 with victory in the Mothers Day Gift Vouchers Novices' Hurdle (Division 1) over two miles. He went on to win the Arkle in 2006 and Champion Chase twelve months later.

Many of you will remember the 1991 Peterborough Chase which featured two Cheltenham Gold Cup winners, in Desert Orchid and Norton’s Coin. It was Dessie’s penultimate run and he could only finish third behind Sabin Du Loir with Norton’s Coin, who’d famously won at Prestbury Park at 100/1, split the pair in second.

Fellow Gold Cup winner Master Oats was rising through the chasing ranks during the 1993/94 season and won here by twelve lengths in a 2m7½f handicap chase under Andrew Thornton on 27th December, one of six victories that campaign.

There have not only been top-class chasers to have raced here down the years, with many champion hurdlers having also been successful. They include Kribensis, trained by Sir Michael Stoute, who landed the Chatteris Fen Juvenile Hurdle in 1988, shortly before winning the Triumph Hurdle and went on to win the Champion Hurdle two years later.
1996 hero Collier Bay won his second race over fences here over 2m7½f nearly three years after winning at Cheltenham whilst Make A Stand, winner in 1997, won his second race over hurdles when an easy winner of the Yelling Novices’ Hurdle in May 1996.

The popular grey Rooster Booster who took the Champion Hurdle in 2003, twelves month after winning the Vincent O’Brien County Hurdle at the Festival, won his tenth and final race here at Huntingdon in October 2005 winning the Play Blackjack At williamhillcasino.com Hurdle, a conditions event that was being run here instead of Kempton Park, which was closed for the installation of the all-weather track.

The most recent champion hurdler to win at Huntingdon is Buveur D’Air, winner of the Cheltenham showpiece in 2017 and 2018, who sauntered to his second win over hurdles by winning the Racing UK Novices’ Hurdle four years ago. After falling in 2019 and missing this year’s renewal due to injury, he will hopefully be back to try and regain his crown in twelve months time.