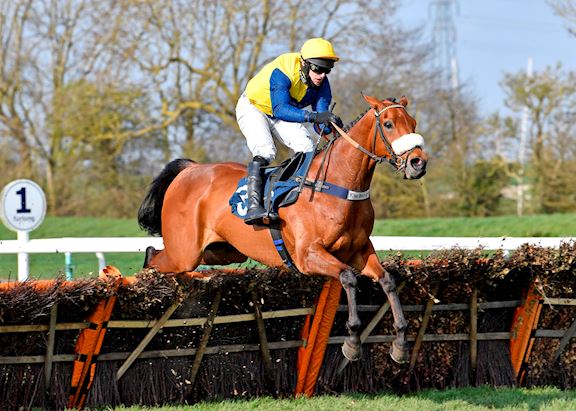 Racing returned to Huntingdon on Tuesday 23rd March and those tuning in on Racing TV were treated a seven-race card of highly competitive action.

As well as a smart Bumper horse winning and raising money for a fantastic cause, trainer Kim Bailey was left impressed by one of his emerging talents notching up a fourth win of the season. We sent Graham Clark to review the action and speak to the winners on the day …

Kim Bailey has trained plenty of smart performers throughout his career and Ajero looks to be another after completing a four-timer for the season in the Racing TV Handicap Hurdle.

Since tasting defeat on his debut over hurdles at the track in September, the Red Jazz gelding, who is a half-brother to the yard’s now retired Grade Two Peterborough Chase winner Charbel, took another significant step forward with a stylish success in the two mile feature.

Tracking the early pace set by Sofia’s Rock for much of the race the 4-7 favourite moved into the lead under David Bass approaching the second last, before pulling away smartly late on to defeat the Pam Sly-trained Haafapiece by eight and a half lengths.

Bailey, speaking away from the track, said: “That was exactly what I wanted to see and I was really pleased with him. The big thing today was that he didn’t appear to hang right-handed like he has done before. Maybe the wind operation might have helped straighten him out.

“I think we will have to try him left-handed. I don’t think Aintree is the place to go for him but I’ve made an entry for him in the Scottish Champion Hurdle at Ayr and there is the possibility of going to Punchestown as well.”

FUNDRAISING DODDIETHEGREAT LIVES UP TO HIS NAME

Exactly a week after Honeysuckle stormed to glory in the colours of owner Kenny Alexander in the Unibet Champion Hurdle at The Festival™ supporting WellChild, the Nicky Henderson-trained Doddiethegreat did likewise in the same silks in the concluding Racing TV Standard Open National Hunt Flat Race.

All prize money secured by the 5-6 favourite’s four and a half length success was donated by connections to the My Name’5 Doddie Foundation, which was set up by former Scotland rugby union star Doddie Weir, who is battling Motor Neurone Disease.

Winning rider Nico de Boinville said: “All prize money won today between myself, and the governor and my riding fee as well will go to Doddie Weir’s foundation in support of Motor Neurone Disease. It’s a great cause and Kenny Alexander the owner has named him after a great man. I think he is a fantastic advert for it.”

On Doddiethegreat he added: “He is a fantastic horse as it is not easy for horses to win bumpers under penalties. The boss gave me free rein and he said if there was no pace to let him stride on as he has got a massive stride so you might as well use it. The main thing was to get him through his bumpers and educate him.”

NATHAN BRENNAN AT THE DOUBLE TO SECURE CAREER FIRST

Jockey Nathan Brennan enjoyed a day to remember after securing the first double of his career with a comfortable 10 length success aboard Emmas Dilemma in the Racing TV Mares’ Handicap Hurdle, a victory which also a first under rules for trainer Hannah James.

Brennan said: “I’m going to try to get used to them now (riding doubles). I’m delighted for Hannah and all the team. She is a small little gutsy filly and she tried her heart out. Hannah had her spot on and it’s great for her as she deserves it.”

Torrent Des Mottes had got the ball rolling for Brennan when securing a third course victory and giving trainer John Cornwall his first winner in 377 days, when defeating Go As You Please by half a length in the Thank You & Happy Retirement Matthew Tong Handicap Chase.

Cornwall said of the 9-1 winner: “I’ve only got a couple of horses in at the moment with all this going on. He ran a week ago but he probably needed it over two and a half miles and that has brought him on.

“He likes it around here as he has won over two and two and a half miles before.”

PATIENCE THE KEY FOR COLM MCCORMACK ON WYE AYE

Adopting a patient approach proved the key for jockey Colm McCormack who ended his 142 day wait for a winner when steering Wye Aye (7-2) from last to first to collect the Racing TV Novices’ Handicap Chase by three and a quarter lengths.

The Philip Kirby-trained six year old had opened his account over course and distance in November and had been in good form until being pulled up at Market Rasen in testing conditions in January.

But he travelled nicely enough here and McCormack said: “He is a quirky horse. You have to just drop him in and ride him cold and switch him off but he has got a bit of ability. It is just about getting it right on the day.

“The wind operation has obviously helped and the drying conditions are what he wants.”