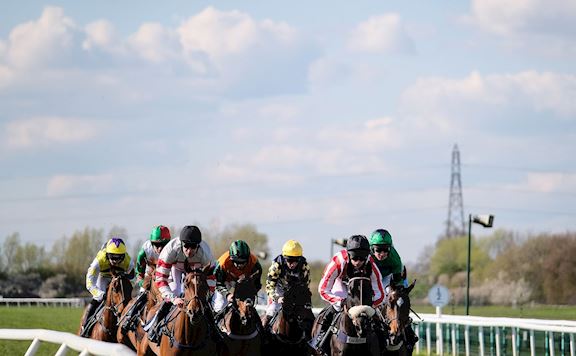 Raceday Round-Up: Tom Cannon closing in on seasonal best following Grisbi De Berce success and all the other news from our final fixture of the 2020/21 season

It was the final fixture of Huntingdon’s 2020/21 season on Monday April 12th.

Jockey Tom Cannon is rapidly closing on his best ever seasonal tally and he chalked up his 50th success of the season aboard Grisbi De Berce in the Racing TV Novices’ Hurdle for trainer Alan King.

Elsewhere on the card, Colorado Doc put up his best performance of the season to defy top weight in the Racing TV Huntingdon Handicap Chase while Shantou’s Melody looks very much one to keep an eye on for next season following his victory in the Racing TV Intermediate Open National Hunt Flat Race.

This was the final fixture of the 2020/21 season at Huntingdon although it is not long until the first raceday of the new season, which takes place on Thursday 6th May.

CANNON CLOSING IN ON BEST EVER SEASONAL TOTAL

Tom Cannon has his sights set on securing his best ever seasonal total after reaching the 50 winner mark for the campaign aboard Grisbi De Berce in the Racing TV Novices’ Hurdle at Huntingdon on Monday.

Although out of luck in joint-owner Charles Dingwall’s silks in the Randox Grand National aboard Talkischeap at Aintree on Saturday, the 29 year old moved closer to eclipsing his 2014-15 total of 52 winners by carrying the same colours to glory aboard the five year old.

Despite being keen early on the 7-1 chance, who is trained and part owned by Alan King, moved stylishly into contention in the two mile contest before quickening past odds-on favourite Cabot Cliffs up the run in to score by two and three quarter lengths.

“Grisbi De Berce was a bit keen but he settled okay in the end. He is a work in progress but he has still got an engine when everything goes right. He did surprise me as he left me with plenty to do but he got there and did it nicely in the end.

“It was a great learning curve for him. Time will tell how good the form is but it is gradually all coming together.”

Equally pleased with Cannon’s achievement was Cheltenham Festival-winning trainer King, who speaking away from the track said: “I’m delighted for Tom. He has ridden a good number of winners for us and he is still riding plenty as well for the likes of Chris Gordon.

“Hopefully we can try and find him the few winners he needs to get over the line.”

There was no questioning the attitude of David Brace-owned and trained Colorado Doc who went one better than his previous start after battling back from being headed to defeat Havana Hermano by half a length in the feature Racing TV Huntingdon Handicap Chase under top weight of 11st 12lb.

Sean Bowen, winning rider, said: “I’d say he ran up against a very well-handicapped one of Dan Skelton’s last time. Today there was nothing like that in the race. I always worry they dry up when they have got a hood on and they are in front on their own but he battled away well.

“His first three runs this season were diabolical but he has got lots of ability and David’s horses are in great form. He is a great jumper and that is what wins you races.”

SHANTOU’S MELODY LOOKS ONE TO WATCH

The Jonjo O’Neill-trained five year old, who finished behind three places behind impressive Mersey Novices’ Hurdle winner My Drogo when fifth on his last start at Cheltenham in October, made light work of his rivals under Jonjo O’Neill Jr to claim the concluding two mile prize by eight lengths.

O’Reilly, who is one of 10 members of the winning syndicate, said: “I’ve been in various syndicates and this is by far my most successful as it’s my first ever winner.

“We knew he was in with a chance as he ran in a decent race at Cheltenham. It was nice to be back racing but it was a great experience watching him win. We leave all the decisions up to Jonjo and his team but there looks to be lots to be positive about.”

Grade One-winning rider Johnny Burke equalled his best seasonal total of 45 winners following the victory of Inn The Bull, who made his first jumps start for trainer Alastair Ralph a winning one by seven and a half lengths in the Racing TV Handicap Hurdle.

Burke said of the 10-1 winner: “He’s dropped a long way in the weights and had some smart form for Alan King so it was not much of a surprise what he has done.

“He was just struggling on the ground but when we straightened up he really put the turbo on and kicked away.”

Fortune may have favoured Exelerator Express on his previous victory over fences at Uttoxeter, but the Neil Mulholland-trained gelding needed no luck in running to defeat Iconic Muddle by three quarters of a length in the Racing TV Novices’ Handicap Chase.

Sam Twiston-Davies, jockey, said of the 11-4 chance: “It was a bit frustrating last time out at Market Rasen as he pecked on landing at three out and that probably cost him the race

“We were quite hopeful here on what is a fairly straight forward track with no tricky fences and he has got the job done and showed a good attitude at the end.”

The next fixture at Huntingdon racecourse takes place on Thursday 6th May.