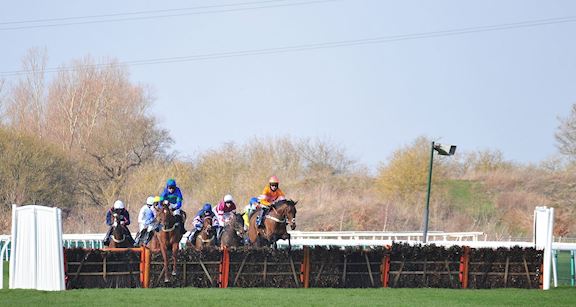 Richard Spencer insists it is a “privilege” to train Wonderwall, who will receive the chance to test his Cheltenham credentials ahead of The Festival™ in next month’s Ballymore Sidney Banks Memorial Novices’ Hurdle at Huntingdon (Thursday 10th February).

The lightly-raced six-year-old, who is named after the hit single released by Oasis in 1995, will tackle the extended 2m 3f Listed contest ahead of a return to Grade One level in the Ballymore Novices’ Hurdle at The Festival (Wednesday 16th March).

Having finished seventh in the Grade One Weatherbys Champion Bumper at last year’s Festival, the gelded son of Yeats filled the runner-up spot on his hurdling debut at Newbury in December before going one better at Doncaster in convincing fashion on 11th January.

Although Spencer had considered sending Wonderwall to Cheltenham on Festival Trials Day (Saturday 29th January) for the Grade Two Ballymore Novices’ Hurdle, he feels an outing in the Huntingdon contest fits better with his long-term plan.

Newmarket-based Spencer said: “The Sidney Banks is where Wonderwall is going next. We will run him there and then, all being well, it will be on to the Ballymore.

“We had both the Sidney Banks and the Ballymore trial at Cheltenham on our mind after Doncaster.

“We just felt it would probably be better for the horse to give him a couple more weeks and go for Huntingdon as it is then a nice time frame on to the Ballymore. It just spaces his races out a little bit better.

“We want to try and give him as much chance to turn up at The Festival in top form instead of rushing him back quickly to run in the trial at Cheltenham.

“Hopefully, he can take another step forward at Huntingdon and we can then bring him to Cheltenham in tip-top shape.”

Had it not been for a late mistake on his hurdling debut, Spencer believes Wonderwall could have been heading into his next assignment unbeaten over obstacles.

Spencer added: “Last season was one for him to simply gain experience. James (Bowen, jockey) looked after him in the Champion Bumper as he knew there were more days for him and yet he still finished seventh.

“He is a stronger horse this season. Whatever he done in his bumpers he was always going to be better over hurdles and the same again when he goes chasing.

“The winner at Newbury had already run over hurdles which means a lot and that stood him in good stead.

“It was our first start over hurdles and although he had schooled well over hurdles at home it was a novice mistake that cost him that race.

“If he had jumped that cleanly and done similar to what he did at Doncaster on his second start, he probably would have won. It was a good bit of experience to get under his belt before Doncaster where he got the job done nicely.

“His bumper form is rock solid and every day I see him he impresses me at home and hopefully he is showing that on the track.”

Having saddled Rajasinghe to glory in the 2017 Group Two Coventry Stakes at Royal Ascot in just his second year as a trainer and Rumble Inthejungle to victory in the Group Three Molecomb Stake at Glorious Goodwood in 2018, Spencer admits it’s a “privilege” to have a live contender for The Festival on his hands.

He added: “For myself and the team, it is a privilege. We have got the owners that support us and buy the horses at the sales.

“We have been lucky to have some very good horses and it would be great to be competitive at Cheltenham. If we get there, he is going to have a chance.

“As owners they (Rebel Racing) want to compete on big days and as a trainer and as a team we are very much looking forward to it.

“It just shows how we can deal with five-furlong sprinters as well as jumpers.”

As regards to the naming process, Spencer believes the gelding was the standout candidate to be called Wonderwall.

The trainer concluded: “When we purchased him we got three other horses at the same sale and they have all been named after songs.

“He was the one from day one after that sale that stood out. He needed to have the name Wonderwall.

“Out of the four, he had a lot of ability from an early stage and it is great he is now living up to the name. Fingers crossed, he can keep progressing.”