The derby & the Suffragettes

A protesting suffragette – Miss Emily Davison – brought down the King’s horse by running onto the course at Tattenham Corner, while minutes later, the stewards objected to and disqualified the winning favourite Craganour, amid claims of prejudice.

Emily Wilding Davison was born on 11 October 1872, in Blackheath, London but lived in Longhorsley, Northumberland. After attaining B.A. Honours at the Royal Holloway College, she went on to study English Language and Literature at St Hugh’s College, Oxford where she won first class honours.

However, and this may have proved significant, women, at that time, were not admitted to obtaining degrees at Oxford. In 1906, Emily joined the Women’s Social and Political Union, known as the WSPU, a movement led by Emmeline Pankhurst, who defiantly believed that ‘direct action’ would lead to women gaining the vote.

Three years later, Emily gave up her position as the teacher to a family in Berkshire, to promote the cause of women’s suffrage and very quickly came to the forefront of the ‘direct action’ groups. Although her following police record has little to do with the Derby, it is only with the knowledge of the dedication and fervency of Miss Davison that her action at Tattenham Corner can be understood.

Never one for compromise, Emily once barricaded herself in her cell to avoid being force-fed, but a prison officer forcing a nozzle of a hosepipe through the window, drenched her and flooded her cell. On another occasion, in protest to her fellow suffragist’s being force-fed even when not on hunger strike she jumped down an iron staircase and received severe spinal injuries.

Her seven prison sentences included six months for setting fire to post boxes in Holloway. She soaked rags in paraffin, set them alight and then pushed them into the boxes – a crime that started a wave of similar incidents. Sentenced at the Old Bailey and force-fed, she was released only 10 days before the end of her sentence due to injuries incurred.

Emily was also imprisoned for 10 days for assaulting a Baptist Minister in Aberdeen, mistakenly identified as David Lloyd George. However, she was mercifully released after four days’ hunger strike. Although completely dedicated to the cause, Emily Davison was regarded by many in the movement as a maverick and few if any knew what disruption she had planned for Derby Day.

On the morning of the race, Wednesday, 4 June 1913, she took two large flags of the suffragist colours – green, white and purple stripes – folded them into a large pad and pinned them inside the back of her jacket, possibly for protection but perhaps a preparation for martyrdom. She then travelled to Victoria Station where she notably bought a return ticket to the Tattenham Corner Station at Epsom.

The Derby was the third race of the afternoon. An examination of Emily’s pockets after the race included the racecard, known as Dorling’s List, a helpers pass for the WSPU Kensington festival and a handkerchief that bore her name and was to quickly prove her identity.

Fifteen runners went to post on a bright but cloudy day. Mary Richardson, who stood with Emily at Tattenham Corner, wrote of the incident in her book Laugh a Defiance:

“A minute before the race started she raised a paper on her own or some
kind of card before her eyes. I was watching her hand. It did not shake. Even
when I heard the pounding of horses’ hoofs moving closer I saw she was still
smiling. And suddenly she slipped under the rail and ran out into the middle
of the racecourse. It was all over so quickly.”

The author, having watched the flickering film, frame-by-frame many times, can confirm that after nine of the 15 runners had past there was a gap of a few yards, into which Davison, dressed in a large black coat and hat, slipped under the running rail holding what looked like a sheet of paper. Moving towards the next horse – Agadir – she stepped aside. Two more horses passed, which although close by, her attempts to grab their bridles were unsuccessful. Then, after a space of about four lengths, Emily stood purposely in front of the next horse, Anmer, owned by King George V. and putting her hands up, apparently to grab the bridle, she was forcibly bowled over by the horse, who, a split-second later crashed to the ground, taking Herbert Jones, trapped in a stirrup, down with him. 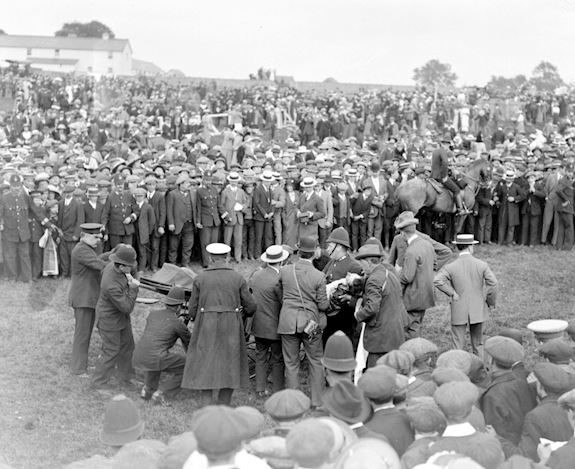 Photographs show that apart from those spectators on the rail in front of the incident, most of the crowd were intent on following the race around the bend. However, seconds later, people rushed towards the stricken parties from the other side of the course.

In retrospect, it seems highly unlikely that Emily, without any form of commentary, would have known where in the running order the King’s horse would have been. Also, from her position, standing low down on the bend, she was unlikely to have seen the first batch of runners coming until they were upon her. Ironically, the first horse she made contact with, was the King’s horse and so doing brought her martyrdom the maximum publicity.

Fortunately, the cinematograph operators of the Gaumont Company were situated on the other side of the course, opposite the incident. With great initiative, the film was shown that evening at the Hippodrome and Coliseum Theatres and later, at many other London and provincial cinemas.

In the aftermath, Miss Davison was taken to Epsom Cottage Hospital, where she never regained consciousness and died on 8 June 1913. Her death certificate confirmed a “fracture of the base of the skull caused by being accidentally knocked down by a horse through wilfully rushing onto the racecourse at Epsom Downs”.

Herbert Jones, who was also found unconscious, was first taken by a wheeled stretcher to the weighing in room, and when unable to get through the door, taken to a room at the back of the stands. An examination revealed a fractured rib, cuts and bruises on the body and a black eye. On regaining consciousness, he was taken to the Great Eastern Hotel, Liverpool Street, where he stayed the following day, returning to Newmarket on the Friday.

Lloyds Weekly News reported: “Asked if he remembered anything about the incident, Jones said the woman seemed to clutch at his horse, and he felt it strike her…. He asked after the suffragette who had brought him down, and there was only kindness in his voice.”

The King’s horse Anmer, although suffering bruises, recovered amazingly well, but, although he reappeared in the Ascot Derby two weeks later, he failed to win another race, either that year or the next.

The media’s coverage of the incident brought forth opinions from one extreme to the other.
On 12 June, Votes for Women wrote, “Waiting there in the sun, in that gay scene, among the heedless crowd, she had in her soul the thought, the vision of wronged women. That thought she held to her; that vision she kept before her. Thus inspired, she threw herself into the fierce current of the race. So greatly did she care for freedom that she died for it.”

By contrast, almost all the racing fraternity were angered by Miss Davison’s intrusion, coming on top of what many thought the unjust disqualification of the winning favourite Craganour. Furthermore, The Racing Calendar made no mention of the incident at Tattenham Corner or, to the fact that Amner and Herbert Jones were brought down.

The funeral of Emily Davison was not only noble and impressive, but it became the iconic event in women’s suffrage. Starting from Victoria Station 6,000 suffragists, many dressed in white and carrying white lilies marched through streets to St George’s Church in Bloomsbury, where the funeral took place. The coffin and attendants then travelled by train from King’s Cross Station to Newcastle and finally, to the churchyard of St Mary the Virgin, Morpeth in Northumberland, where 30,000 people attended. Her gravestone bore the WSPU slogan “Deeds not words”.

However, the Suffragette cause didn’t end there. On the outbreak of the First World War in August 1914, all the imprisoned suffragettes were released unconditionally. After which, Mrs Pankhurst recommended a temporary suspension of their militant activities, calling for her followers to actively campaign for women’s war work.

In 1915, after a crucial need for a million more shells, Lloyd George, now Minister of Munitions, met with Mrs Pankhurst, suggesting she led a Women’s Right to Serve demonstration to overcome trade union opposition to female labour. She did, and within months 80% of the munitions’ workforces were women. Known as ‘Munitionettes’ they produced a continual flow of 18-pound shells to win the war.

In 1918, citing the work carried out by women during the First World War, the Government gave women the vote if over 30 years of age and a property owner, or married to a property owner. Ten years later, the age limit for women was reduced to 21, the same as for men. 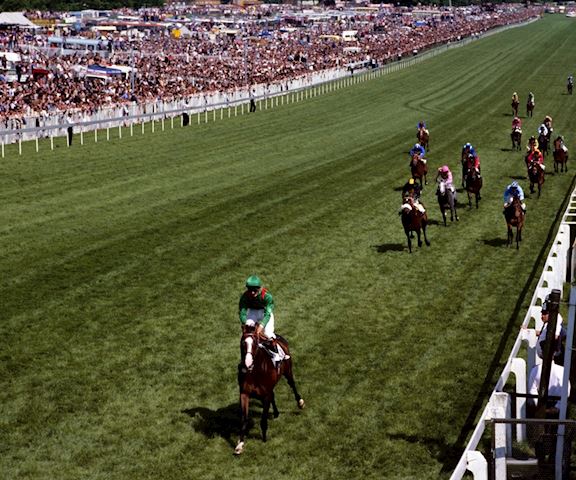 Throughout the history of racing at Epsom the horses have always been the stars of the show.