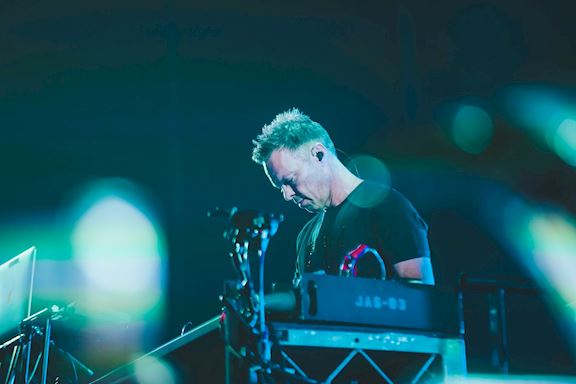 Following on from the announcement of JESS GLYNNE and MADNESS last week, The Jockey Club Live and Sandown Park Racecourse are pleased to announce the latest act for their 2019 summer season – PETE TONG & THE HERITAGE ORCHESTRA performing Ibiza Classics on Wednesday 31st July 2019.

There are few individuals in the world of dance music who can claim the kind of influence Pete Tong has had over the last twenty years. As the voice of Radio 1’s prestigious dance programming, Pete has held a commanding presence over the industry for more than two decades. With an unparalleled ear for new talent, Tong has become the leading tastemaker of the electronic generation. While he’s known publicly as Pete Tong the DJ, behind the scenes, he’s an industry icon.

With conductor Jules Buckley and 65 piece The Heritage Orchestra, Ibiza Classics combines unparalleled production, awe inspiring visuals, a mix of brand-new songs as well as your favourite White Isle tracks. In 2019 the show will see new reimagined tracks which will soon be featured on their third record, fused together with incredible visual effects and music technology.

“It’s great to welcome Pete Tong’s Ibiza Classics to Sandown Park!  His legacy in dance music covers two decades and the show with The Heritage Orchestra gets bigger and better each year.

“The evening will feature exciting racing followed by a set of Ibiza’s most iconic tracks from recent years played by the 65-piece orchestra together with great visual effects.”

PETE TONG & THE HERITAGE ORCHESTRA are the third Jockey Club Live headliner to be confirmed for 2019 at Sandown Park, with MADNESS set to headline on Wednesday 24th July and JESS GLYNNE on Thursday 8th August.

The Jockey Club Live are leading promoters on the UK live scene, delivering spectacular line-ups of some of the hottest chart talent and legendary household names to some of the world’s most famous racecourses. The Jockey Club Live concerts at Sandown Park Racecourse are a staple in the region’s social calendar and over the past few years have hosted thousands of fans of live music, with performances from artists including George Ezra, Nile Rodgers & Chic, Olly Murs and Tom Jones.

The events are renowned for combining a fun filled evening at the races with a spectacular evening concert in the informal and relaxed open-air setting of the hallowed turf.

The Jockey Club racecourses have world-class customer facilities featuring an array of award winning restaurants that cater for all tastes, be it Fine Dining through to delicious bistro food. The Jockey Club venues welcome over 2 million people a year for some of the UK’s biggest racing events so you can be sure of a fantastic evening.

Tickets will be on sale at 8am on Friday 21st December via thejockeyclublive.co.uk, with a presale available to customers at 8am on Thursday 20th December. Tickets are priced starting at £42.50 for adults and £22.50 for under 18’s. All T&Cs are available on sandown.thejockeyclub.co.uk. There will be hospitality packages available to suit all budgets.

In addition to Sandown Park, The Jockey Club Live will be hosting live concerts across Market Rasen, Newmarket, Aintree, Haydock Park and Carlisle racecourses next summer.