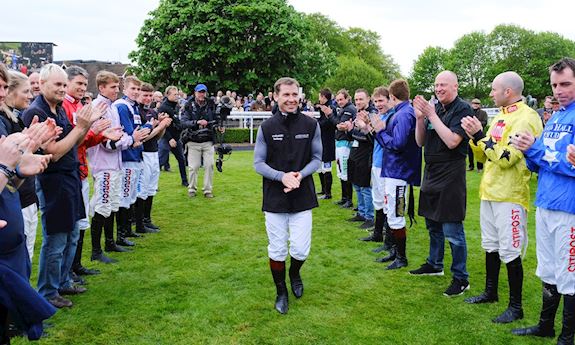 Jump Season round up at Sandown Park

As the Jump Season has now come to a close at Sandown Park, Clerk of the Course, Andrew Cooper offered his thoughts on the season and reviewed some of the highlights.

‘We’ve seen some great Jump racing at Sandown Park this season, with a higher than average number of runners and plenty of high quality performances.

The star of the Season Opener in November was the Colin Tizzard-trained Elegant Escape who beat Thomas Patrick in the Future Stars Chase. Both horses ran next in the Ladbrokes Trophy Chase (ex Hennessy Gold Cup at Newbury) with Elegant Escape finishing 2nd before winning the Coral Welsh Grand National at Chepstow over Christmas.

Headline act at the Betfair Tingle Creek Festival in December was the mighty Altior in the Grade 1 Tingle Creek itself, getting the better of a duel with Un De Sceaux in rain-softened ground. Dynamite Dollars won the Grade 1 Henry VIII Novices’ Chase on the same day and won again at Kempton over Christmas before injury curtailed his season.

An on-the-upgrade Elixir De Nutz won a competitive Grade 1 Tolworth Hurdle in January, and was well-fancied for the Supreme Novices’ Hurdle at the Cheltenham Festival before a late injury ruled him out. On the same card we saw the Willie Mullins-trained Laurina win the Listed Mares’ Hurdle in effortless style before finishing 4th in the Champion Hurdle, and a brave performance from Houblon Des Obeaux won him the popular Veterans’ Chase Final.

Champion Hurdler Buveur D'Air won his third consecutive Contenders Hurdle in February, before unfortunately falling in the big one at Cheltenham. Back in 3rd on the day was the Dan Skelton-trained Roksana who next time out took advantage of the fall of Benie Des Dieux to win the OLBG David Nicholson Mares’ Hurdle at the Festival. Later on the same day we saw another Festival winner here when Defi Du Seuil got the better of Lostintranslation in the Grade 1 Scilly Isles Novices’ Chase, before beating the same horse in the JLT at Cheltenham.

Royal Artillery Day later in February benefitted from the late transfer of the Kingmaker Novices’ Chase from Warwick, and saw the improving Glen Forsa trounce Kalashnikov. Both horses disappointed subsequently in the Arkle at Cheltenham.

It was fantastic to see Sandown favourite Le Reve lift the Grand Military Gold Cup in March and we will look to name a suitable race after him next season.

The Imperial Cup and EBF Final were typically competitive renewals, with wins for Malaya and Third Wind respectively. One for Rosie finished 2nd in the EBF Final and will make a lovely chaser. The Aintree Grand National Meeting saw wins for novices in Kalashnikov, Lostintranslation, Reserve Tank, and Ornua, all of whom were seen in action at Sandown Park earlier in the season’.