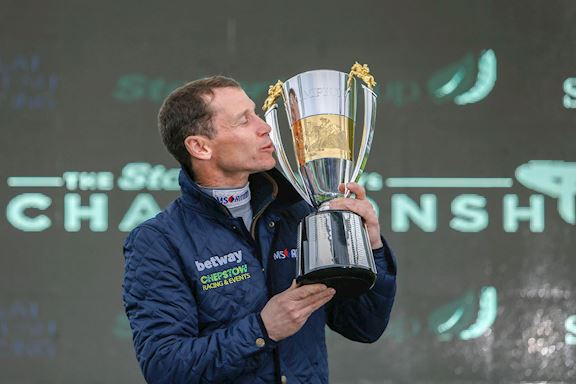 A record-breaking Jumps season will very shortly be drawing to a close. But before that, this Saturday at Sandown Park will provide a last hurrah before the season begins afresh in October.

For the fourth season in succession, Richard Johnson will be crowned Champion Jockey. The 41-year-old is only growing more driven with age and the 4000-winner mark is within sight. It should be no surprise if we are celebrating him many times over again in the coming years.

As well as Johnson, jockey Bryony Frost, the woman who has won the hearts of sports fans countrywide, is set to be named Champion Conditional. She rode out her claim earlier in the season, but her most memorable moment was undoubtedly her spectacular and emotional victory aboard Frodon in the Ryanair Chase at Cheltenham. It will be a pleasure not only to rejoice in her successes this year, but to also see her back in action after injury.

It will not only be the riders who receive the gushing praise of Sandown’s grandstands, however. Paul Nicholls is on the verge of his 11th trainer’s title while J.P. McManus, a man who has given so much to the sport, is to be recognised, once again, as the sport’s triumphant owner.

The seven races on the card will be headlined by the bet365 Celebration Chase (3:00). The incomparable Altior, the horse who broke and extended Big Buck’s’ record for consecutive victories over obstacles. He faces four rivals including Alan King’s Sceau Royal, who gave Nicky Henderson’s machine a real scare in the Champion Chase at Cheltenham. On good ground, it will be no walkover for Altior and in Diego Du Charmil, God’s Own and Vosne Romanee, he has three more opponents worthy of the stage.

While the Celebration Chase boasts the prestigious Grade One title, the bet365 Gold Cup (3:35) is one of the biggest handicaps of the entire season. Mark Bradstock’s Step Back heads a maximum field of 20 as he seeks to emulate his front-running blitz in this race 12 months ago. He is not the only former winner in attendance though, with The Young Master the mount of top amateur Sam Waley-Cohen. Other prolific winners such as Beware The Bear, the Ultima Handicap winner at Cheltenham and the race’s top-weight, Joe Farrell, the 2018 Scottish National hero and Present Man, the dual Badger Ales Trophy holder are also among the line-up.

More significant action to note includes the Oaksey Chase (2:25) where former Grade One performers Definitly Red, Black Corton and Charbel go in search of a redemptive end to their seasons, although top handicappers Go Conquer, Gold Present and Cobra De Mai may have something to say about that. The Select Hurdle (4:10), meanwhile, is the final graded race of the season with the mare Mia’s Storm hoping to serve it up to hardened professionals in Old Guard, Black Op and Younevercall.

An important and illustrious occasion possesses a fitting cast to perform the Jumps season encore. It will be a pleasure, as ever, for you to join us.