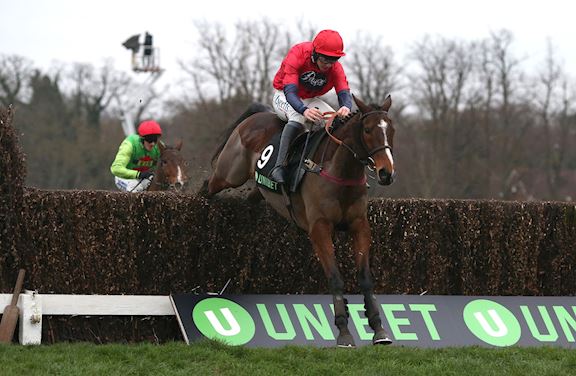 Jepeck amongst some strong runners in the Unibet Veterans’ Steeple Chase

In the Flat vs Jump discussion, one of the key cards held by the latter is that its participants continue to compete for many seasons. The Veterans Chase Series ensures that careers continue when the younger legs begin to take over. Those who have reached double figures remain on the circuit and Sandown kicks the year off by hosting a race for such seasoned heroes.

The sorely-missed Houblon Des Obeaux came clear in the straight to take the race last year, and as we remember him with this race in his honour, 14 declarations have been announced.

The eldest of the experienced bunch are Theatre Guide, runner-up in a Hennessey Gold Cup in his pomp and in this contest 12 months ago, and Regal Flow, a Midlands National winner, whose combined age totals 26. Neither have sparkled for a while, but the exploits of Pete The Feat, who finished second at the age of 14 in 2018, offer them significant belief that they can continue to compete in this sphere.

At the other end of the spectrum lie both Burtons Well and Dark Flame. They may be 11, like most of the field, but between them they have shared only 15 runs over fences (by comparison, Theatre Guide has had 39 of his own). Perhaps, they are merely late bloomers with even more still to come.

The weights are topped by the immensely consistent King’s Odyssey. He won the Warwick leg of this series back in November in his first attempt at three miles, while trainer Evan Williams also runs On Tour, third in this race last year and running off a mark 7lb lower this time around.

Also towards the top of the racecard is Aintree specialist Vieux Lion Rouge. Now 11, he is finally starting to live up to his title (his French moniker translates as “Old Red Lion”). He is another to have already recorded a victory in the series, taking the Chepstow leg in October and runs off only 1lb higher here.

The current bookies favourite is certainly the form horse: Jepeck has been in the top two in his last four starts, winning two of those this season. They have both been over hurdles, but Anthony Honeyball will have ensured his charge is fully fit via that preparation.

Elsewhere, Carole’s Destrier was a winner of a Newbury Veterans Chase last March and is one of the stalwarts of Neil Mulholland’s yard while Abolitionist hasn’t been the easiest to train over the years, but is dangerous at his best, especially with 3lb claimer Charlie Hammond aboard.

Smooth Stepper was second in the Warwick race won by King’s Odyssey most recently while Wild West Wind’s confidence has been rebuilt recently after failing to finish in all five of his races in 2018. The field is made up by course and distance winner Shanroe Santos and book-ended by the magnificently named Horatio Hornblower, seeking a hat-trick for Nick and Chester Williams.