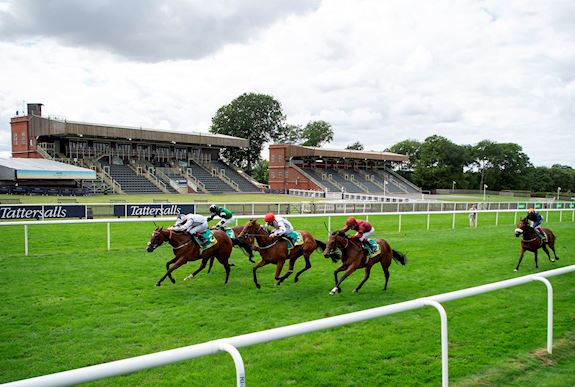 We are treated to another cracking two-year-old Listed event this evening courtesy of the Irish Stallion Farms EBF Star Stakes over seven furlongs and it could well serve up a treat.

The likely favourite is the Nick Bradley Racing-owned Fev Rover, who must be one of the highest-rated two-year-olds yet to actually win a race in training at the moment.

The daughter of Gutaifan ran above market expectations in the Group 2 Duchess Of Cambridge Stakes at Newmarket earlier this month finishing a strong-finishing head behind the winner and previous Royal Ascot heroine Dandalla. Her debut behind the Martyn Meade-trained Method was hardly shabby either considering that horse cosily won a Listed race at the weekend.

There’s every reason to suggest the step up a furlong in trip will suit Fev Rover and considering this assignment is a drop in grade we may just get to see her in the winners’ enclosure for the first time in her short career.

Mark Johnston won this 12 months ago with Walk In Marrakesh and looks to have an obvious contender in the shape of the unbeaten Dubai Fountain.

She has made all on both her starts to date over this trip and was most impressive last time out on soft ground when beating her rivals by over eight lengths up at Haydock Park. The form of her debut success has worked out nicely with the runner-up She Do having gone on to success since. At this stage there’s no telling how good she might be and must rate a serious threat with P J McDonald on board once again.

Royal Ascot form is brought to table in the form the Roger Varian-trained Setarhe. The daughter of Footstepsinthesand created a good impression when winning on debut at Newmarket and ran with credit to finish second behind Dandalla in the Albany Stakes. On strict form lines that may give her a bit to find with Fev Rover but she didn’t get the clearest of runs that day and there should be more to come.

Of the others, Concessions would have to be considered after a fine run a Listed race at Newmarket last time. The Richard Hannon stable are in red-hot form at the moment and there runners can’t be ignored.

They also saddle another runner in the race in the shape of Feathers, who could be the dark horse in the contest having scored narrowly on debut at Goodwood.