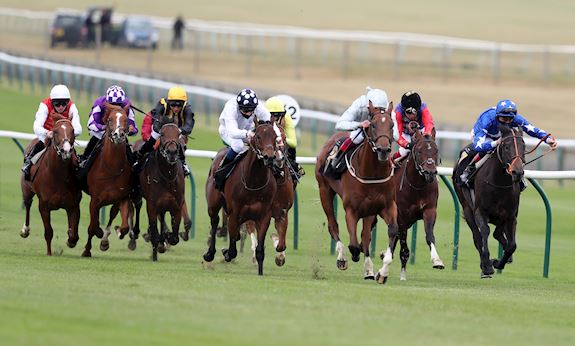 The flying five here at Sandown Park has seen some top notch sprinters down the years and that’s very much the case of graduates from the Listed National Stakes with the likes of subsequent Group 1-winner Tiggy Wiggy and now prolific sire Sir Prancelot having won the race in recent years.

This year’s renewal sees only a field of six head to post but that doesn’t mean it’s going to be easy to find the winner!

Likely favourite is the Mark Johnston-trained Eye Of Heaven who we last saw down the pack in the Group 2 Norfolk Stakes at the Royal meeting last month. He was a disappointing favourite that day and was said to have been unsuited by the good to soft underfoot conditions.

His debut success at Newmarket was encouraging and that form holds up so well. The third that day Tactical won the Windsor Castle and only last week followed it up with victory at Group 2 level. The fifth, six and eighth have all subsequently come out and won. With Frankie back on board again it would be more than understandable if he were to go close here.

North Yorkshire-based Nigel Tinkler is one of the most capable trainers in the business and Ubettabelieveit is the only horse he is sending down tomorrow.

Having improved from his debut run the son of Kodiac really impressed back at Doncaster in a Novice Stakes at the end of last month coming away from his opposition to win by three and a half lengths. Champion jockey Oisin Murphy was in the saddle for the first time that day and he retains the ride here.

He rates as a most viable alternative to the favourite given the factors above and that confidence is high and he should have more to offer.

Of the others, Furlong Factor already has some Listed form to her name having finished second to Sardinia Sunset at York a week ago. It’s a fairly quick turnaround but in her short career to date she has been very consistent and shouldn’t be underestimated here.

Deliver The Dream was somewhat of a surprise winner last time at Lingfield showing good speed. His trainer Robert Cowell is a dab hand with sprinters and he certainly has a part to play in the race.