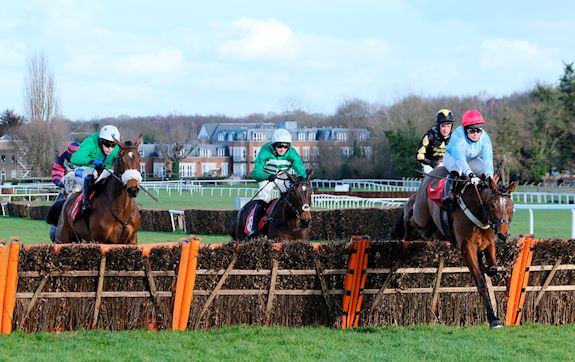 Page Fuller screamed for joy after celebrating the biggest win of her career aboard Anythingforlove in the Jane Seymour Mares’ Novices’ Hurdle at Sandown Park.

Having come unstuck in her hat-trick bid upped to Grade Two company in the Rossington Main Novices’ Hurdle Haydock Park last month, the Jamie Snowden-trained six year old bounced back to form at the same level.

Victory on her first try over two and a half miles could now prompt an appearance at The Festival™ supporting WellChild at Cheltenham next month.

Despite being faced with a host of challengers on the approach to the last Anythingforlove, an 18/1 chance who is a half-sister to 2017 Cheltenham Gold Cup winner Sizing John, battled on in tenacious fashion to hold off the hat-trick seeking Sandymount Rose by two and three quarter lengths.

Fuller, who rode out her claim back in October, said: “It meant a lot. It was my first winner at this level. She is a lovely mare and it’s great for a syndicate like Foxtrot Racing to have a horse like her.

“She is a half-sister to Sizing John so we knew she would stay all day and we knew she had every chance here. I was delighted when Gavin (Sheehan) had to go to Fontwell. He asked me at home schooling this morning ‘I bet you are glad Fontwell is on’, and I was like ‘yeah you’re right I am!’, so everything has worked in our favour. She is a lovely mare.

“It was really hard work and I just had to assume today that we were going to stay. I’ve hit the front coming in to two out and I knew I’d hit the front a bit sooner than I had liked, but at the same time in all her races she has won she has looked like she will get swallowed up, two, three furlongs from home but and then just kept motoring, and she heard the other horses coming and just kept picking up all the way to the line.”

Although Anythingforlove had to prove her stamina for the trip, winning handler Snowden was confident that the extra distance would not be an issue for the progressive mare.

He said: “She won a couple of bumpers last season and won twice this season but the step up in trip was going to suit.

“She found two miles in the Rossington Main too sharp for her and we rode her to get some black type that day and we probably rode her wrong over the trip.

“We came here to nick a bit of third and it is always nice to come away with the win. She is hardy, gutsy, but she is not very quick but she has got a huge amount of stamina.”

Anythingforlove holds entries in both the Grade One Close Brothers Mares’ Hurdle and Grade Two Dawn Run Mares’ Novices’ Hurdle at The Festival, but the Lambourn trainer will let the dust settle before firming up future plans.

He added: “She certainly won’t be in the two mile novice but Cheltenham is a completely different kettle of fish. We will enjoy today and work out where we go after this. This was always the plan and we will enjoy it and see where we go from there.”