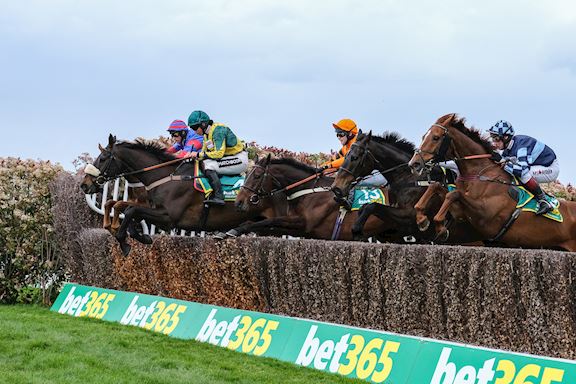 Leading bookmaker bet365 has extended its sponsorship of the Jump Finale at Sandown Park (Saturday 24th April in 2021) for a further three years.

bet365, which first extended its support to the Jump Finale in 2008, will also continue to back Classic Trial Day at Sandown Park, which takes place on Friday 23rd April, 24 hours before the curtain comes down on the Jump Racing season.

The announcement comes as entries are revealed for the Saturday feature race, the bet365 Gold Cup.

Pat Cooney, Head of Racing PR at bet365, said: “We are delighted to extend our association with Sandown Park for the Jump Finale meeting. The fixture continues to increase in popularity and has become many racing fans’ favourite day of the year.

“We can once again look forward to some top-class races and in addition, the Jump Jockeys’ Title looks set to go to the final day of the season, with Brian Hughes, Harry Cobden and Harry Skelton all vying closely for the most keenly contested Championship in years.”

Phil White, Regional Director for The Jockey Club’s London courses, said: “We are extremely grateful to bet365 for their commitment to supporting both the Jump Finale and Classic Trial Day at Sandown Park for a further three years. They have been working with us on these fixtures since 2008 and their dedication to enhancing these racedays is significant. We would like to thank bet365 for their continued sponsorship.

“The Jump Finale at Sandown Park Racecourse is always a wonderful occasion and one we look forward to. The entries for this year’s bet365 Gold Cup look extremely strong and we are hopeful of a very competitive race on April 24th.”

Meanwhile, entries are revealed today for the feature handicap chase at the bet365 Jump Finale, the bet365 Gold Cup. The Grade Three contest takes place over three miles and five furlongs and can boast an outstanding roll of honour featuring the likes of Arkle, Mill House, The Dikler and Desert Orchid. There are 66 entries in 2021.

Pat Cooney, Head of Racing PR at bet365 said: “We are delighted to see so many talented horses entered and the race should provide yet another thrilling finish.

“No five year old has ever won this illustrious race, but that may change this year as we have made Christian William’s Kitty’s Light our market leader following on from his impressive win last time out.

“That said, there are many possible winners in a race that is always a popular event.”

Ask Me Early, a seven-year-old who has won three of his five starts this season, most recently defying 11st 11lb in a novices’ handicap chase at Uttoxeter on March 20th is expected to be one of those lining up in the race.

His trainer Harry Fry said: “He is in the Scottish National but it is unlikely he will run there and the preference at this stage would be the bet365 Gold Cup. His plans very much depend on the ground conditions as his form has all been on slower ground, but we thought at this stage to give him this option.

“He was never comfortable from the word go on his previous start at Sandown, but Sean Bowen said he wasn’t happy going to post and you could see early on he wasn’t travelling like he usually does.

“He has come out of the Uttoxeter race in really good order. This would be a good race to go for as we have some good targets in mind as a second season chaser next season. We always thought he was a chaser and out and out three-mile plus stayer.

“Up until his Sandown run, I was training him for the Midlands National. On the back of Sandown, we decided not to aim quite that high, but the novice handicap chase on the same card was a nice stepping stone and he came through that well. I think he is a proper National horse next season, certainly a Welsh National type and potentially one for the Grand National.”

Also under consideration for the race is Ramses De Teillee, trained by David Pipe. He began the campaign by finishing fifth in the Grade One Grande Course de Haies d'Auteuil, the French Champion Hurdle, before going to take the Grade Three Planteur at Chapel Stud Handicap Chase at Cheltenham’s November Meeting.

After disappointing efforts in the William Hill Becher Chase at Aintree and in the Welsh National, he has hinted at signs of a revival on his latest two outings.

Pipe said: “Ramses is only nine but it feels like he has been around for a long time. He would need softer ground to run. I would say he would be okay if it was good to soft.

“He ran well in the Midlands National where he probably didn’t quite get the trip but he has come out well and I was happy to put the entry in the bet365 Gold Cup.

“We will just have to see what the weather is like now. We always thought it would be a tough season at the start of the season. He won well at Cheltenham though and ran well in defeat in France. He disappointed in the Welsh National but since then he has run well at Haydock and the Midlands National.

“A horse like him is in the grip of the handicapper at the moment but he has come down two pounds for his latest run. With his rating, it makes life a bit harder for him but he always runs his heart out every time.”