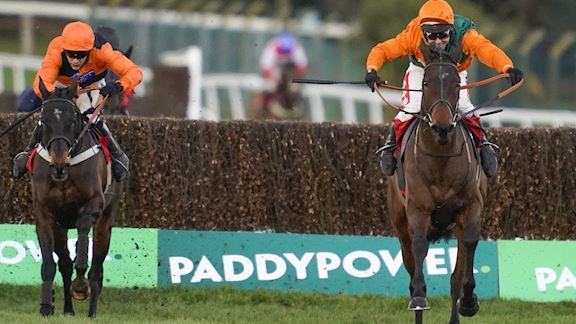 Paddy Power Imperial Cup Day at Sandown Park is always the perfect appetiser ahead of The Festival™ supporting WellChild at Cheltenham.

With the action continuing behind closed doors while COVID-19 restrictions remain in place, Racing fans are having to make do with enjoying the coverage on ITV Racing and Racing TV. We sent Graham Clark to review the action and speak to the winners on the day …

Dan Skelton warmed up for next week’s Cheltenham Festival in perfect fashion as Langer Dan proved a cut above his rivals in the Paddy Power Imperial Cup Handicap Hurdle.

Without a win to his name since claiming a Listed contest at Wetherby in November 2019, the five year old ended his disappointing run in emphatic fashion to give the winning trainer his first success on the hurdles course at the Esher track in the Grade Three.

The 5-1 chance delighted Skelton, who said: “It was brilliant. I’ve just got so much admiration for this little horse. He is so tough. He is tiny but he has got a brilliant attitude and is all heart.

Langer Dan holds an entry in the Martin Pipe Conditional Jockeys’ Handicap Hurdle at The Festival next week and if he runs would be going in pursuit of the £50,000 bonus offered by Paddy Power to any horse that wins the Imperial Cup and follows up at Cheltenham.

Skelton added: “If everything is okay we will go Friday if he gets in - if not we will consider Aintree but at the end of the day he has won a big race today and we will celebrate that.”

Farinet demonstrated stamina is very much his forte when opening his account in Britain in the Paddy’s Rewards Club Novices’ Handicap Chase.

Having finished third on his stable debut for Venetia Williams at Haydock Park last month the six year old built on that effort with a battling success in the Listed prize, which was staged at Sandown Park for the first time following its switch from the Cheltenham Festival.

Jumping the last in the 2m 4f prize it looked as though the 13-2 chance would have to settle for second best behind Up The Straight. However, Farinet reeled in the Richard Rowe-trained seven year old half way up the run-in to score by six and a half lengths.

Winning jockey Charlie Deutsch said: “I knew my lad after the last time I rode him at Haydock would stay really well. I think he will want three miles so I wanted it to be a test. To be fair coming into the last he was fairly tired and I missed the last as well. The horse in front has stopped a bit but it is very tough to pick up again and go to the line but he is a lovely horse.”

BAILEY HAILS FLIRTATIOUS GIRL AS TOUGHEST MARE HE HAS TRAINED

After having her colours lowered for the first time at Huntingdon last time out by Rainyday Woman, the Flemensfirth mare exacted her revenge to gain a first success at Listed level.

Racing closest to the stands side rail for much of the home straight the 13-2 chance pulled out plenty under David Bass on the climb to the line to hold Speech Bubble at bay by two and a quarter lengths and give Bailey his second victory in the two mile prize.

Bailey said: “She had improved at home but I felt the track here would suit her better than at Huntingdon as all she did was stay that day. I was slightly concerned the ground might be too soft for her but I don’t think I’ve come across a mare as tough as her. She really is unbelievably tough. To go and do what she did is great.

“She is not very big but she has done it now. She has won a Listed race and been placed in one and if she never runs again she would be worth a lot of money as a broodmare.”

The 22 year old, who rode out his 5lb claim at Wincanton earlier this year after partnering his 40th winner in the saddle, was not for stopping aboard the Nigel Twiston-Davies trained five year old in the Grade Three contest, which was also his first success at the track.

Nailor said: “It is my first winner at Sandown and my first Graded race winner as well. I’m 22 and it is my best season yet - that was my 24th winner to get a big winner like means everything. Carl Llewellyn has a lot to do with this horse so it is thanks to him and the owners for keeping me him on such a big day.

“I thought I might have taken it up too soon but all he does is stay as he has not got lots of turn off foot. He is a bonny horse and he is a good character and has been a good horse to me.”

Beauport runs in the colours of owners Bryan & Philippa Burrough, which were famously carried to success by Corbiere in the 1983 Grand National.

MOORE HOPES HE HAS ANOTHER SUPERSTAR DE GRUGY ON HIS HANDS

Hudson De Grugy made it two wins from three visits to Sandown Park after giving weight away all round to claim a front running success in the opening Paddy’s Giving Away £1 Million Today Juvenile Handicap Hurdle.

Despite not being foot perfect at the final flight, the 4-5 favourite, who is related to the Gary Moore yard’s former multiple Grade One winner Sire De Grugy, galloped on relentlessly under Josh Moore to defeat Global Agreement by 17 lengths.

Trainer Moore, speaking away from the track, said: “He has won well, though I’m not sure what he has beat. He is a National Hunt-bred horse taking on Flat-bred horses and he coped with the ground better than the others.

“He is a big strong horse that has been bought to go chasing in the future. We just kept it simple out in front today as it worked last time so why change it. I would like to see him dropped in but the races he has been in haven’t had many runners.”

JOHNSON HAS LONGER TRIPS IN MIND FOR DALY’S FORTESCUE

Four-time champion jockey Richard Johnson believes Fortescue could be the ideal type to thrive in races over long distances next season following his first success in the ‘From The Horse’s Mouth’ Podcast Handicap Chase.

Appearing to benefit from the testing conditions and the strong pace set by favourite and eventual runner-up Debece, the Henry Daly-trained seven year old left his previous form this season behind him after capturing the three mile prize by four and a half lengths.

Johnson said of the 8-1 winner: “He was a novice last season and he won three times and did well but he was in the weights. Hugh Nugent rides him all the time but he is off with a broken leg so that’s why I came in for the ride.

“He won around Exeter so we know he stays very well but if anything I was in top gear for the first circuit. He was one of the horses that benefited from the conditions.

“Debece is a decent horse and he put me under pressure as he went a good strong gallop and that made it a good strong test. Next season races like the Welsh National and extremes of trip are where his future lies.”