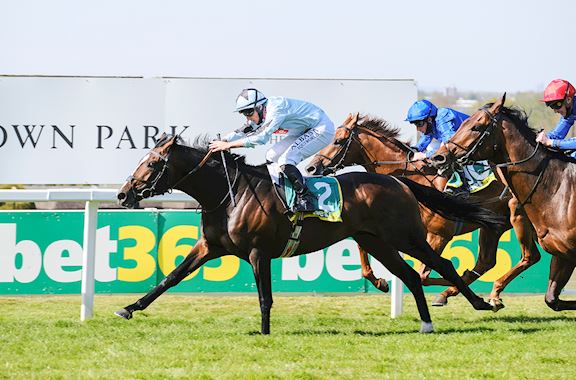 With the end of the jumps season just 24 hours away some stars of the Flat served up a treat at Sandown Park on bet365 Classic Trial Day.

Frankie Dettori celebrated a double on the day with impressive performances from Waldkonig and Palace Pier, while Tom Marquand produced a 25-1 winner who could be heading to The Cazoo Derby with his first ride on UK soil since a successful trip to Australia.

Had you asked any pundit for a tip for the bet365 Classic Trial few would have mentioned Alenquer, a 25-1 chance with seemingly little appeal.

However, the French-bred colt not only impressed when landing the feature race but is now seriously being considered for The Cazoo Derby on June 5th.

Always in a prominent position, the son of German stallion Adlerflug saw off all challengers inside the final furlong to take the honours by half a length from Adayar.

The winner is trained by William Haggas and was partnered to success by Tom Marquand, who was having his first ride of 2021 back in the UK after enjoying another successful spell in Australia.

Haggas, speaking away from the track, said: “I thought he did it well, but I think it paid to be handy. I thought the second did well to finish where he did considering where he came from. He had been working nicely with some older horses and I thought he was ready to run.

“I was a bit surprised by the price he was but it was on different ground to what he ran on last season as he ran on soft both times, but he seemed to enjoy it out there.

“He hit the line well and I think he will be seen to better effect over a mile and a half. It is terrific that Tom had a winner on his first ride back and I’m thrilled to bits for him.

“All options are open. He could be supplemented for The Derby but he is also in the German Derby. We will just re-group and see how he is as I’m not quite sure where he will go yet.”

Training partnerships might be a new development in British racing but there was something reassuringly familiar about Palace Pier’s victory for the Gosden-Dettori partnership.

John Gosden and son Thady are teaming up for the first time this year as joint trainers and are already off to a flying start, which improved further when

Europe’s highest-rated three year old of 2020 got his season off to the best possible start to win the Group Two bet365 Mile.

Returned as the 4-11 favourite, the four year old Kingman colt took up the running just inside the final two furlongs and powered away to take the honours by eight lengths from David Simcock’s Bless Him.

A dual Group One winner last season at Royal Ascot and Deauville, the hugely talented performer now has Group One targets at Newbury and Royal Ascot on the horizon while a step up to 10 furlongs for the Coral-Eclipse back at Sandown Park has not been ruled out.

John Gosden said: “It was a good performance and I’m very clear he was at 80%, but luckily nobody put it up to him today. He enjoys this track - he won as a two year old here and Frankie (Dettori) was very happy with him.

“He was having a very good blow afterwards but this has saved me going up and down the all-weather gallops at home hundreds of times, so in terms of going to the Lockinge next this is the right place. He’s a lovely horse and hopefully we can go to the Lockinge and then Royal Ascot."

Trained by John and Thady Gosden, Waldkonig could now be aimed at the Group Two Hardwicke Stakes at Royal Ascot.

Travelling comfortably throughout in the 10 furlong contest, the four year old Kingman colt tracked the leader Extra Elusive before taking the lead entering the final quarter mile before running on well to see off the challenge from Desert Encounter inside the final furlong by a length and a quarter.

Returned the 6-4 favourite, today’s race was only the fifth start of Waldkonig’s career. Winner of his sole two year old outing, he was third behind stablemate and subsequent French Derby and Saudi Cup winner Mishriff in a Listed contest at Newmarket before going down at 4-9 in a novice contest at Haydock Park on his two outings in 2020.

John Gosden said: “He has benefitted from that. He has strengthened up and done well. I couldn’t be more pleased with him. He went to Pontefract and won well on fast ground and he has won here on well watered ground.

“He is a versatile horse over a mile and a quarter and a mile and a half. The fact he missed most of last year might have benefited him.

“We could look at the Hardwicke at Royal Ascot with something else in between, maybe back here with a penalty for the Brigadier Gerard (Thursday 27th April).”

NAAMOOS READY FOR A STEP UP IN CLASS FOR JOHNSTON

Trainer Mark Johnston watched Naamoos land the mile bet365 Esher Cup under Ben Curtis – then revealed his three year old will be stepping up in class later this season.

Carrying top weight of 9st 7lb, the Wootton Bassett colt looked to face his strongest challenge just inside the final furlong from Rifleman, before his rival jinked and unseated Ryan Moore.

Naamoos, returned at 11-2, was winning for the second time in 2021, having similarly made all the running in a mile handicap at Musselburgh on Easter Sunday. Raised 7lbs for that success north of the border, a step up to Listed class now beckons.

Winning trainer Mark Johnston said afterwards: “It was a great performance. We weren’t absolutely sure with him but he has gone to Musselburgh as well this season and won well.

“Last season we thought he was a good horse, then we had that disastrous run at Pontefract in the soft ground.

“He is one of these middle of the road horses who we thought was stuck between handicaps and stakes races but hopefully he is not stuck anymore. We will be looking at Listed races now."

Trainer Richard Hughes was left mulling over his Royal Ascot options after watching Nelson Gay take the opening race of the day.

Partnered by David Egan, the son of Mehmas was going ominously well on the heels of the leaders entering the final furlong, before showing electric turn of foot to score by six and a half lengths in the five furlong bet365 Handicap.

It took Nelson Gay seven starts to break his maiden tag although he ran some good races in defeat, most notably when sixth in the valuable Weatherbys Super Sprint.

Today was the gelding’s third victory on the bounce, following on from a Southwell maiden success in December and a Wolverhampton handicap success last month.

Trainer Hughes said: "He was good today -that's the first time we've seen what I see at home.

“As a two year old, we went to Yarmouth first time out thinking he wouldn’t come off the bit and The Lir Jet beat him and I still felt justified to run him in the Norfolk (Group Two Norfolk Stakes at Royal Ascot). I thought he was a good horse and it just didn’t happen for him last year.”

As for plans for the future, Hughes could take advantage of Nelson Gay’s current handicap mark and another trip to Royal Ascot could be on the cards.

He continued: “I didn’t expect him to win by that far! He’s in a race at Goodwood next week before the handicapper grabs him, or we could go for the handicap at Royal Ascot (Palace of Holyroodhouse Handicap), but I think the jump back into Group company would be going back to square one at the moment. We’ll work our way back up and if he’s good enough he’ll get there.”