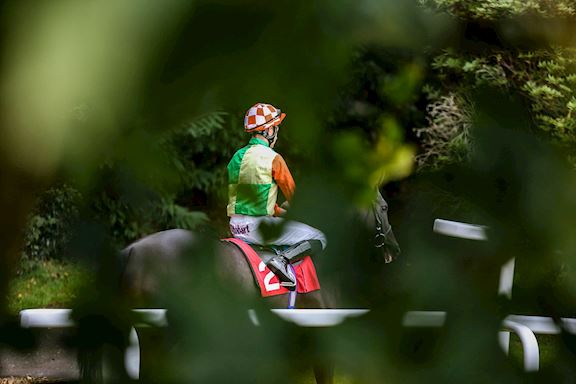 Charlie Appleby is hopeful that Yibir can prove himself to be a smart three year old this campaign, by getting his season off to the perfect start in the Group 3 bet365 Classic Trial at Sandown tomorrow (Friday 23rd April).

The Classic Trial can often act as a pointer for The Cazoo Derby at Epsom Downs in June and Yibir arrives at the Esher track with some solid course form under his belt, having broken his maiden tag over seven furlongs here last August.

The three year old went on to round off his campaign with an impressive victory at Newbury a month later and with that form subsequently working out well, Appleby is looking forward to seeing his charge back on a racecourse.

Yibir is a general 20-1 chance for The Cazoo Derby and, speaking of his chances at Sandown Park tomorrow, Appleby said: “It’s a nice draw for him (in stall six). He’s done well through the winter and progressed with each run as a two year old, ultimately winning the Haynes Hanson and Clark Conditions Stakes at Newbury – form which got a nice boost at the start of the season.

“His preparation has gone well and we feel he’s hopefully one of our nicer middle distance horses, so we’re expecting a nice run from him.”

Appleby also sends out Adayar, who was an emphatic winner of a maiden at Nottingham last October, and added: “It was a very pleasing victory at Nottingham on his second start and he’s done well through the winter.

“He’s drawn down in stall one, which isn’t ideal, but it all depends on the pace angles really. We’re hopeful that they’re two nice middle distance horses that can start their three year old careers off and we’ll see where we’re pitching them in the first half of the season after Friday.”

The 10-strong field is a competitive one and also includes Etonian, who has two wins at this course under his belt already. His trainer Richard Hannon is looking forward to seeing him run. He said: “He’s in good form, he loves that track and we’ve been very happy with him over the winter.

“He’s won twice there and hopefully he can do the business again, but it’s a step up again. In his work he looks like he wants this trip, which is a good thing.”

Asked if Etonian can become a middle distance horse, Hannon replied: “Hopefully - we’ll find out a lot on Friday.”

Another interesting contender is the unbeaten Belloccio, who represents David Menusier. The colt signed off with an impressive Listed success at Toulouse last November and Menusier is hopeful that he can make an impression here.

He said: “He’s in good form - obviously that will be his first run of the season so he’s likely to need it like the rest of my horses, but physically and mentally he’s in a good place.

“He’s unbeaten in two starts and both races have worked out really well, so we’re really hopeful that he can show a very good level of ability and let’s hope that Friday will be a stepping stone to something better down the line.”

Friday’s card also includes the Group 2 bet365 Mile, a race that John and Thady Gosden hope is tailor-made for Palace Pier. The four year old enjoyed a fine campaign last term, twice winning at the top level, and Thady Gosden reports him to be ready for his first start of the season.

He said: “The plan was to go straight to the Lockinge but we have decided to give Palace Pier a run at Sandown as he seems quite fresh at home. He started life off last season in a handicap at Newcastle and he ended up winning two Grade Ones, so he did well throughout the season but he had previously shown some good form as a juvenile.

“He lost a shoe coming out of the gate at Ascot on Champions Day. Although he had won on soft ground, the ground at Ascot was bottomless and it was a bit too deep. It was real specialist ground. He was beaten by a soft ground specialist and finishing third was a credit to him.

“He has been working nicely and he appears to be enjoying himself and he seems to have improved from three to four. I’m sure there will be some nice three year old milers emerge but hopefully he can be among the best of the older ones.”

Palace Pier’s chief threat looks likely to be the improving Khuzaam, who is two from two since undergoing a gelding operation.

The five year old was an emphatic winner of a valuable conditions contest on All-Weather Finals Day at Lingfield earlier this month and Shadwell Estates’ Racing Manager Angus Gold is hopeful that Khuzaam can hold his own on his first try at Group level.

He said: “He won very well the other day. We gelded him at the end of last year and it seems to have helped him from what we’ve seen so far this year, but obviously we’re going up a grade now and we’re back on the grass against a proper Group 1 horse, so it’ll tell us a bit more about him and whether we’re in the right league or not.”

The third Pattern race on the card is the Group 3 bet365 Gordon Richards Stakes over a mile and two furlongs. The current favourite is Waldkonig, who was an easy winner on reappearance in a handicap at Pontefract earlier this month.

The four year old was at one point a leading fancy for last year’s Derby at Epsom Downs and Thady Gosden is hopeful of a big campaign from the son of Kingman.

“We have always thought plenty of him as he is a half-brother to an Arc winner by Kingman so he has got the right sort of pedigree and hopefully things will start coming right on track for him.

“He was always a horse we hoped would improve from three to four but at the same time it was a bit of a frustrating season last year as things didn’t go to plan - hopefully this year they will.

“This is a completely different challenge to the one at Pontefract and though it is a bit of a task he is doing well at home.”

Also prominent in the market is last year’s Dante Stakes winner, Thunderous, who has not been seen since that success at York last July. However, Charlie Johnston is hopeful that his injury problems are now behind him and is looking forward to seeing how the four year old fares tomorrow.

He said: “We’re really looking forward to getting him back out. Obviously he’s a horse who still has a huge amount of potential and we’ve only managed to get to the track with him five times in his first two seasons, so we’re just pleased to be back and looking forward to it really.

“We’re 100% happy in terms of the injuries - there’s no concerns there whatsoever. He’s been back in full work since before Christmas and I would fully expect him to improve for the run.

“He’s not run any further than the Dante trip at this stage, so we thought this ticks a lot of boxes as a comeback race and then we can learn a bit from this and hopefully build and go forward to even bigger and better things down the line.”

Another four year old who is open to improvement this term is the Owen Burrows-trained Hukum, who was fifth in last season’s St Leger at Doncaster and drops back in trip for this assignment.

Angus Gold believes tomorrow’s run will provide helpful pointers for the season ahead and said: “Everyone’s been very happy with him at home and it’s time to get started with him and see where we are.

“The decision last year was always based on ‘was he going to stay?’ and he looked like he was certainly going to be a mile and a half horse. We knew he had the class for that – and it was just a question of whether he could stay further. I think now is the right place to start him back, with a view to the fact that we’ve got Ascot coming up, so let’s see if we’re on the right lines.

“I saw him last week and he looks fantastic. It will be interesting to get him back out so we can see where we are with him.”