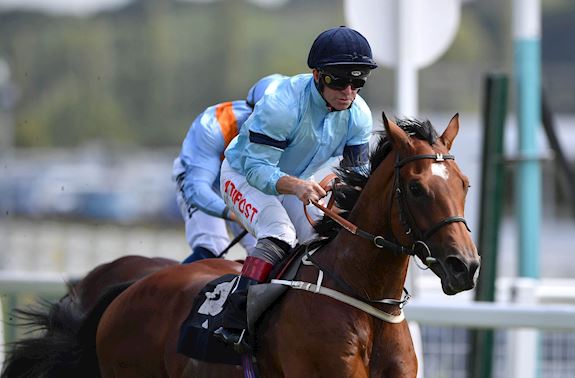 Thunderous remains on course to make his long-awaited return to action in the bet365 Gordon Richards Stakes at Sandown Park later this month.

The mile and a quarter Group Three prize on April 23rd, bet365 Classic Trial Day, has been earmarked as “Plan A” for the Mark Johnston-trained four-year-old, who missed most of last season through injury.

After filling the runner’s up spot in a Listed contest at Newmarket on his comeback last year, the Night Of Thunder colt, who is owned by Highclere Thoroughbred Racing’s George Stubbs Syndicate, went one better on what was to be his final start of the campaign with a tenacious success on his Group Two debut in the rearranged Dante Stakes at York.

Although Thunderous holds Group One entries in the Coronation Cup at Epsom Downs and the Tattersalls Gold Cup at the Curragh along with an entry in the Group Two Betfair Jockey Club Stakes at Newmarket, connections are keen to return him to calmer waters at Sandown Park.

Charlie Johnston, son and assistant trainer, said: “He has not run since the Dante last year as he had another injury after that but he is back in full work.

“Franny Norton came in and sat on both him and Sir Ron Priestley a couple of weeks ago and he was happy with both horses. He has got two more bits of work to come through before he starts out.

“He is entered in the Jockey Club Stakes at Newmarket but I think the first choice would be to come back over 10 then go up to 12 in time so the Gordon Richards Stakes is Plan A.”

Although Thunderous was forced to miss most of last season, connections remained confident throughout his time on the sidelines that he would make a return to full fitness.

Johnston added: “It was frustrating that he got injured but that is part and parcel of it.

“At least it was an injury that had a very good prognosis and we had no concerns about his long term future.

“We are looking forward to seeing him back and having a horse like this makes the winter months feel that much shorter.”