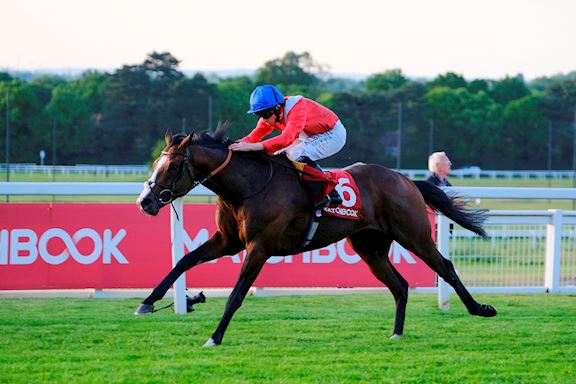 Sandown Park stages the highest-class evening fixture of the Flat season tomorrow (Thursday 27th May), featuring two Group Three contests and Listed action. Jockey Joe Mercer, one of the sport’s all-time greats who sadly passed away last week aged 86, will have the Group Three Coral Brigadier Gerard Stakes run in his memory. Mercer rode the great Brigadier Gerard on all of his 18 starts, with the formidable partnership winning 17 times.

It is 30 years since Sir Michael Stoute saddled the first of his record 11 winners in the Coral Brigadier Gerard Stakes with Stagecraft and the Newmarket maestro most recently sent out the 2019 scorer Regal Reality. In the 2021 running of the 10-furlong contest, Stoute will rely on Sangarius.

After undergoing a second wind operation in December, days after tasting Listed glory at Lingfield Park on his all-weather debut, Sangarius found only the Aidan O’Brien-trained Armory too strong on his seasonal comeback in the Group Two Huxley Stakes at Chester.

Teddy Grimthorpe, racing manager to owner Juddmonte, said: “He won nicely in a Listed race at Lingfield in December and that looks solid form, then he probably just ran into one at Chester.

“He has been fine after that race and we just hope this is a good race for him to realise what good potential he has. He should be able to handle the ground unless they get a sudden deluge and we get an extreme of going, when it turns into specialist ground. But I don’t think it will be like that.

“He handled Chester pretty well and hopefully he will meet the rising ground here well in what looks a competitive race. Sir Michael likes to win this race and we have been pleased with him. He comes into the race in good form and has been straightforward since Chester.”

Doyle said: “I think Extra Elusive has got a really good chance. He will like the ground and I’d like to think he will be there or thereabouts.

“He went to Saudi Arabia and you never know how they will cope with a trip like that afterwards but he seemed fine and I was pleased with his run at Sandown last time.

“He has already won Group Threes at Windsor and Haydock so I don’t see why he can’t win again as he is pretty solid at this level.”

Roger Teal hopes Ocean Wind can open his account for the year in the Group Three Coral Henry II Stakes over two miles after the five year old finished second for the third race in succession when chasing home the mighty Stradivarius in the Group Three Sagaro Stakes at Ascot last time out.

Teal said: “He looks so well at the moment and he is bucking and kicking at home so we thought we would have a go. He ran an absolute cracker behind Stradivarius and he does deserve to get his head in front.

“He has never been to Sandown but he had never been to Ascot and ran well. He likes variety, while he isn’t really ground dependant as he has run on all types of ground. He is one of those horses that shows little at home but then you take him to the track and he comes alive. We are happy with him and he seems in a happy place within himself.”

Finishing one place behind Ocean Wind at Ascot was the Mark Johnston-trained Nayef Road, who is on a recovery mission having failed to beat a rival home on his most recent appearance in the Group Two Yorkshire Cup at York.

Charlie Johnston, son and assistant trainer, said: “He has got to bounce back from a bad run at York where there was no real explanation.

“This had been the target after the Sagaro and I suppose with the benefit of hindsight we wished we would have come straight here.

“If you put a line through his York run we are quite hopeful of reversing the form with Ocean Wind from Ascot, given that was our first run of the year and you would expect him to come forward, providing York was only a blip.

“I’m not convinced these are his ideal conditions but he was second in an Ascot Gold Cup and third in a Queen’s Vase on soft so he proves he can handle it.”

The Alan King trained Rainbow Dreamer has yet to bring the best of his all-weather form on the turf, but Hollie Doyle is optimistic that could still change.

Doyle said: “If this was on the all-weather he would be favourite but he hasn’t translated that to the turf. All my rides on him have been on the all-weather and he has just taken a real liking to racing on an artificial surface.

“He is only lightly raced on grass while he has won on soft before when he was younger so hopefully he will run well.”

Robert Cowell believes Little Earl has plenty in his favour when attempting to follow up his last time out victory at Catterick stepped up to Listed company for the first time in the Coral “Beaten By A Length” National Stakes.

Cowell said: “At Catterick he showed a real good turn of foot and we were not surprised that he improved a good deal from his first start as he wasn’t that wound up.

“He is fast and does have a kick. He likes soft ground and he does have a good enough draw so he has three things in his favour at Sandown.

“We thought Catterick would suit him but his rider was quite surprised with the turn of foot he showed. All the stars aligned that day and hopefully they will again - if he finishes in the first three or four that would be great.”

Bryan Smart hopes first time out Musselburgh scorer Bond Chairman will handle the conditions when putting his unbeaten record on the line in the contest, which has attracted a field of eight runners.

He said: “Bond Chairman is in good form and I’m very happy with him. I think it is as good a National Stakes as there has been for a while but he is in good order and I’m happy enough with the draw in three, so we will see how he goes.

“It is a new shout on the ground but it is hard finding quicker ground at the moment. I was very happy with his debut at Musselburgh as we thought he would run well and he did.”