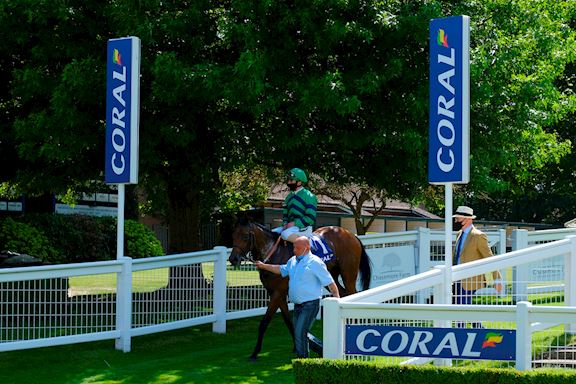 Trainer Marco Botti believes dropping Atalis Bay back to five furlongs can help take his powerful colt “to the next level” as he bids to win the Coral Charge on Saturday 3rd July at Sandown Park.

It will be a first outing against Group opposition this year for the Cable Bay colt, who will attempt to follow up his last time out Listed success over course and distance in the Coral Scurry Stakes and give the Newmarket handler his first victory in the five furlong Group Three prize.

Atalis Bay will be required to take a step forward if he is to make an impression in his first start at Group Three level since finishing down the field in last year’s Cornwallis Stakes at Newmarket. However, Botti is confident the three year old has not yet finished improving.

He said: “The Coral Charge is what we are aiming for on Saturday week. He has come out of the race in great form and ground permitting - as he wants good ground - the plan will be to go back to Sandown.

“It makes sense to go back to Sandown as long as the ground is fine. We know he is going up in class so he will have to give a little more extra but he is clearly improving and going the right way and he has done nothing wrong in three runs this year.

“It was an ideal spot for him last time. He showed plenty of toe from the gate and when he got to the furlong pole and they challenged him he picked up and found an extra gear.”

Despite Atalis Bay winning three of his six starts as a two year old Botti has been surprised by the amount of progression he has made this year, much of which he believes is down to reverting him back to the minimum trip.

He added: “As a two year old he wasn’t the biggest and you never know if they are going to grow or get stronger over the winter. He surprised me as he did well physically.

“He was a bit on the small side but now he is a stocky, powerful colt. The other thing at the back end of last year was we ran him over six furlongs at Wolverhampton and were thinking of the finals day at Lingfield, but after talking to Andrea (Atzeni) he said he has got so much speed ‘try campaigning him over five’.

“We gave him a break and since we have dropped him back to five he has gained confidence in every run. Hopefully he is one of those horses that can get to the next level and continue performing well.”

Meanwhile an appearance in the Listed Gala Stakes at Sandown Park next Friday appears unlikely for stablemate Felix, with Botti leaning towards giving the five year old an outing at the same level in the bet365 Stakes at Newbury on July 17th.

Having finished third behind Lord North in the Dubai Turf at Meydan in March the gelded son of Lope De Vega was last seen when finishing sixth in the Wolferton Stakes at Royal Ascot.

He said: “We are maybe considering Sandown for Felix but I would probably say I’m more inclined to go to Newbury for the Listed race there on July 17th as it gives him a little bit more time between his races.

“I was expecting a little bit more at Ascot but, having said that, he ran his race. The ground was plenty quick enough and maybe it was just a little bit too quick.”