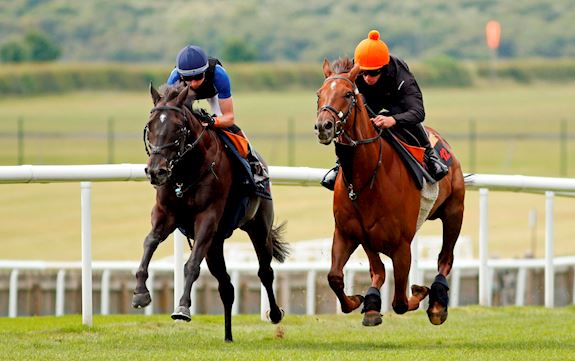 Haggas hoping for rain ahead of next weekend's Coral-Eclipse

William Haggas admitted Addeybb’s bid to win the Coral-Eclipse next Saturday will depend on how much rain falls in the next few days after his stable star continued his preparations with a racecourse gallop before racing at Newmarket today (Friday 25th June).

The globetrotting star enjoyed a second successful Spring in Australia and now the Pivotal gelding is being readied to make his first start in Britain since decisively winning the Champions Stakes at Ascot in October.

However, Haggas is adamant the seven year old will only take his place in the prestigious mile and a quarter prize next Saturday (July 3rd) if the ground is soft enough.

Working over a mile on the track at the July Course under stable lad Jason Favell, the multiple Group One scorer tracked his stable companion Irish Admiral, who was ridden by apprentice jockey Adam Farragher, before the pair finished almost upsides each other crossing the line.

Haggas said of the racecourse gallop: “He hasn’t run since Sydney in April so it was nice to get him away. It wasn’t trying to get him fitter, it was just a mental thing as much as a physical thing.

“When you are looking at Summer racing you need to be lucky to get rain on the day to make it as soft as he likes it. Running in the Eclipse will depend on how much rain falls. There is a balance between keeping training him and not running him. That’s difficult.

“We hope very much that it will be very soft for the Eclipse but I very much doubt it will be. If the word soft is in the going he will probably run as he needs to run. Good to soft is the quickest I would run him on.”

Although Addeybb secured a second successive victory in the Group One Queen Elizabeth Stakes at Randwick on his most recent start, Haggas believes it was a only down to the nature of his character that he managed to achieve victory on conditions that were less than ideal.

Haggas added: “He loves travelling and really enjoys it. He had a great spell in Australia this year on ground that wasn’t soft enough for him but he tries hard. If the conditions had been like they are here he wouldn’t have run.

“He has just got better each year. He has climbed some fairly dizzy heights but it is ground that is crucial to him because he handles that soft ground that a lot of horses don’t.”

With soft ground essential to Addeybb the Classic-winning handler insists much of the stable star’s campaign will be geared towards the defence of his Champion Stakes crown at Ascot in October.

Haggas said: “He can’t take too many races on fastish ground. Summer ground is not really for him. Summer soft is different to autumn and spring soft when it is proper soft so Champions Day is right up his street as he loves that heavy ground. We sort of have to work our season around that.”

Should the ground remain quick at Sandown Park Haggas may rely on recent Hampton Court Stakes winner Mohaafeth, who was a late absentee from The Cazoo Derby at Epsom Downs, to give him a second success in the race following Mukhadram in 2014.

He added: “It is very possible Mohaafeth could run as he wants quick ground so we will see.

“I’ve not worked him yet so we will see what he is like. He was very good at Ascot. A few like him ran well, where as one or two didn’t.”

Addeybb is a 10-1 chance for glory with sponsor Coral, with Mohaafeth on 8-1.