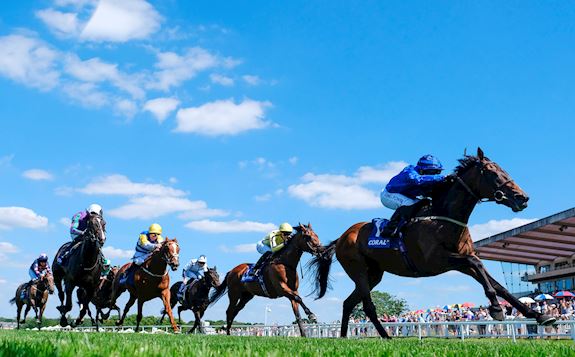 The eyes of the racing world may be focused on Royal Ascot with the five-day spectacular set to get underway on June 15th but Sandown Park’s seven-race programme on Saturday 12th June provided plenty of interesting action.

The feature Listed Coral “Beaten By A Length” Free Bet Scurry Stakes saw a most taking performance from Atalis Bay. Trainer Marco Botti is now looking to step the colt up in class and a return to Sandown Park next month for the Group Three Coral Charge could be on the cards.

Elsewhere on the card, seven year old Trais Fluors, a Group One runner-up in his prime, landed the feature handicap and gave jockey Silvestre de Sousa the first leg of a 90-1 double, while Dejame Paso set a new course record for nine furlongs. 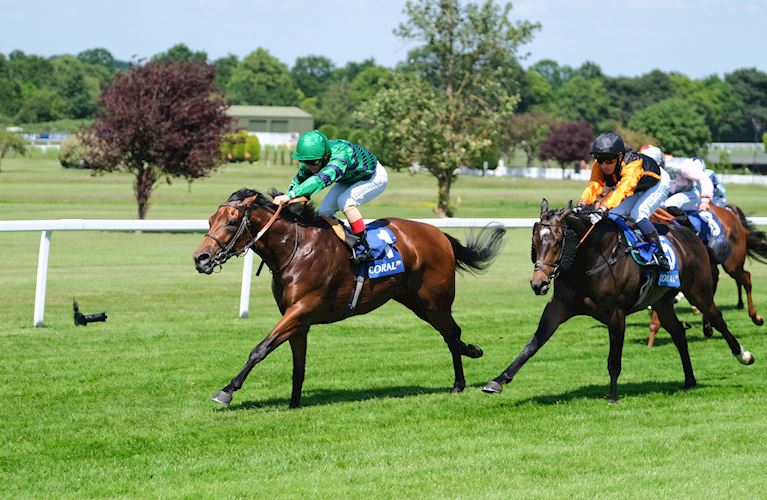 Atalis Bay can look forward to a return Group race company after proving a cut above his rivals to claim the most notable success of his career in the Coral “Beaten By A Length” Free Bet Scurry Stakes.

The Marco Botti-trained Cable Bay colt went one better than on his previous start at York to land a first victory at Listed level when showing a blistering amount of pace in the five furlong feature.

Victory for the well supported 6-4 favourite, who only found leading King’s Stand Stakes contender Winter Power too strong last time out, never really looked in any doubt after he took lengths out of his rivals following a quick exit from stall four.

Although faced with a host of challengers approaching the final furlong, Atalis Bay found more again when called on for his maximum effort by Andrea Atzeni to hold last time out Goodwood scorer Warrior Brave at bay by three quarters of a length.

Botti said: “He has got tons of speed. He has got faster and faster since he was a two year old. He pinged the stalls and Andrea said he was two lengths clear. He said he was trying not to go too quick. I thought in the last furlong, when the other horses came to challenge him, he picked up again and ran strongly to the line.

“This is his trip, five furlongs on fast ground. He just keeps improving. Last year he was a nice horse but not at this level and this year I just think he has got stronger and turned into a proper sprinter.

“We could have gone for at Royal Ascot but he is rated 103 and you are going to give away plenty of weight in a big field so we thought this would suit him quite well as long as the ground was going to be good and it has worked out well. Andrea gets on well with him as well.”

Assessing future plans a return to Sandown could be on the agenda for Atalis Bay with Botti earmarking the Group Three Coral Charge on July 3 as a potential target. The Scuderia Blueberry-owned colt made has made previous appearance in Pattern company when finishing ninth in the Group Three Newmarket Academy Godolphin Beacon Project Cornwallis Stakes at Newmarket last season, when he lost his race at the start by being unruly in the stalls.

Botti concluded: “There are two options. There is a Group Three here at the beginning of July. He obviously has to take on the older horses now or perhaps we go to Goodwood (King George Stakes) and take that route. He will have to improve again taking on the older horses but he seems to be going that way. There would be enough time to take in both races but he is a horse that likes being freshened up after a run. We will see how he comes out it and keep an eye on the ground but it is good to have options.” 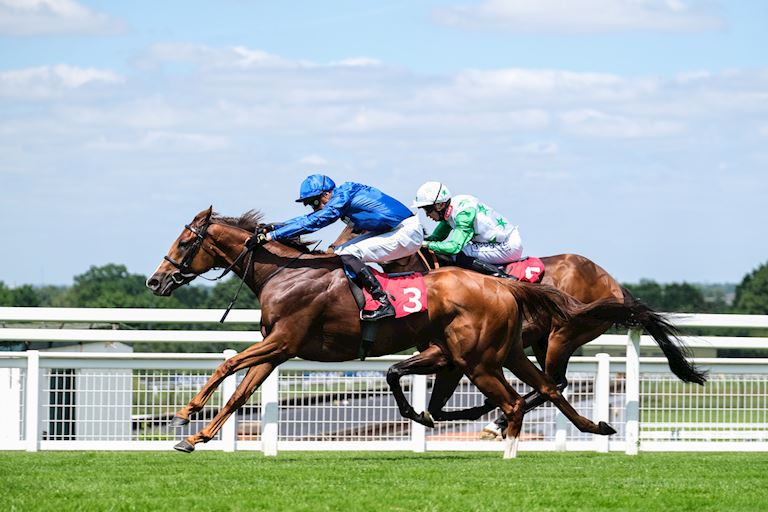 Silent Film opened his account on turf after bouncing back to winning ways with a tenacious success in the Watch Racing Free Online At Coral Handicap.

Without a win in either of his two starts since scoring at Lingfield Park in February, the Charlie Appleby-trained New Approach gelding changed all that with victory on his first start under James Doyle in the seven furlong contest.

Moving clear late on with eventual runner-up Run To Freedom, who defeated leading St James’s Palace Stakes contender and stablemate of the winner Highland Avenue on his last start, the 7-2 chance pulled out more when required to score by three quarters of a length.

Doyle said: “It’s good to get him back on track as he had a couple of tough runs.

“At Wolverhampton he just got pitched out a little bit in what was quite a warm heat. I was pleased with that performance. The plan was to be a bit handier as we were mindful of the drop back in trip but he is a bit lethargic from the gates but that is a trait of his.

“The pace was solid enough and we were happy to take a lead. Once he got through and he got to the outside he picked up nicely.

“He travelled much the best there and it opens options up but I’m sure Charlie will go back up to the mile with him.

“It was good to see Run To Freedom run well as it gives us plenty of confidence with Highland Avenue.” 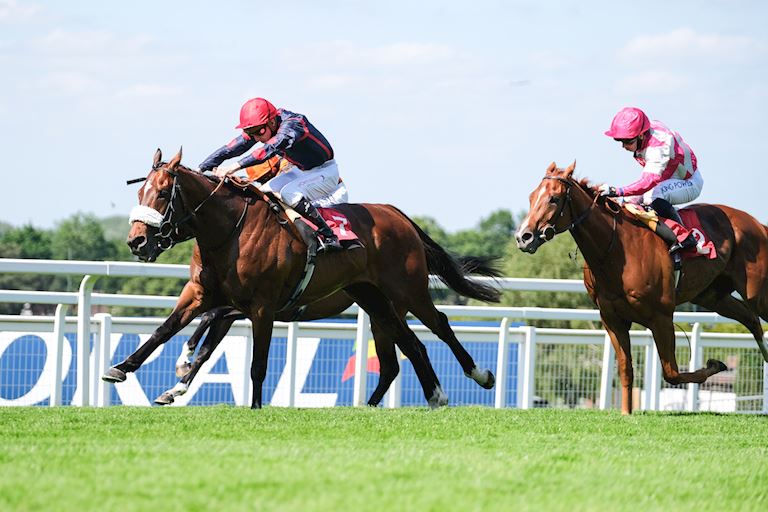 Jason Watson teamed up with his old boss Andrew Balding to good effect when steering Dejame Paso to glory in a new nine furlong course record time in the Coral Handicap.

Finishing no better than third on his previous three outings this term, The Gurkha colt finally got his head in front for the first time since signing of his two year old campaign with victory at Lingfield in October with a battling three quarters of a length success.

Victory for Dejame Paso was secured in a time of 1 minute 56.18 seconds, which was more than half a second faster than the previous record of 1.56.77 set by Titi Makfi in 2017.

Watson said: “There was plenty of speed in the race on paper. I wanted to make it as I knew he stays well but they went too quick early doors.

“Turning in he had quite a bit of ground to make up and another question mark was the ground as he probably wants softer ground.

“Andrew’s horses are in good order and are fit and healthy and that just showed that. I’ve ridden a few times for the old boss and I’ve always got on well with him. It is great to have his support and he is a great man to ride for.” 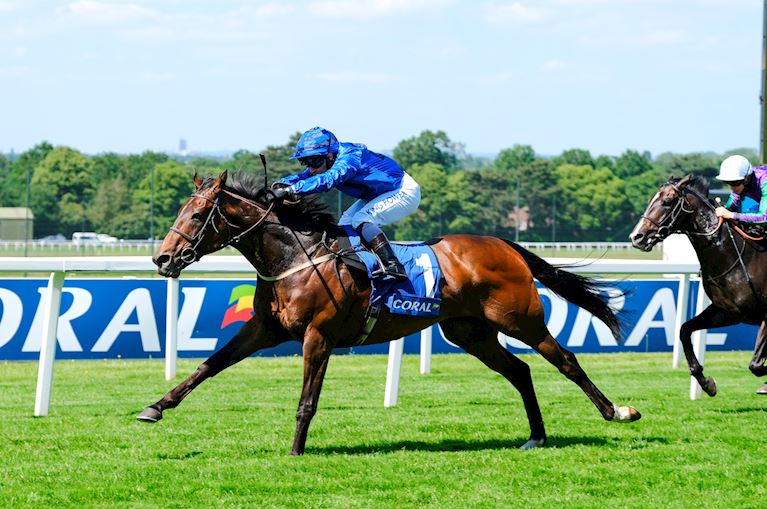 Trais Fluors rolls back the years

The days of competing at Group One level may be over for Trais Fluors, but he demonstrated he retains plenty of ability at the right level when carrying top weight to victory in the Play Coral “Racing-Super-Series” For Free Handicap.

The gelded son of Dansili contested the Breeders’ Cup Mile at Santa Anita in 2019 for his previous trainer Ken Condon and made a further six top-level appearances when in the care of Andre Fabre, including when runner-up in the 2017 Prix Jean Prat. After selling for 40,000 Guineas in the autumn, Trais Fluors finally opened his account in Britain today with victory at the fifth time of asking for current handler Mick Channon.

Despite being the joint-oldest runner in the field, the seven year old showed his younger rivals a clean pair of hooves under three times champion jockey Silvestre de Sousa to run out a comfortable length and three quarter winner of the mile prize.

De Sousa said of the 12-1 winner: “He ran a good race at Nottingham last time out when he got beat by a good horse that Jamie Spencer rode for Richard Hughes (Brentford Hope).

“He did well to finish fourth in tacky ground that day. He got his ground today and they went hard and that suits him. The key is better ground. He carried a lot of weight and that is fair play to the horse.

“He felt better today than last time and in a big field in a better race he could do the same again.”

The veteran Saaheq (9-2) demonstrated he still has plenty of life left in him after providing trainer Amanda Perrett with her first winner in 47 days in the Coral Best Odds Guaranteed Handicap.

Having finished eighth in the World Pool “Dash” Heritage Handicap at Epsom Downs last Saturday, the gallant seven year old showed he can handle a quick turn around after securing his third success since the turn of the year with victory in the five furlong event.

Appearing to appreciate the return to a stiffer track the gelded son of Invincible Spirit stayed on well late on under the season’s leading apprentice Marco Ghiani to defeat Seneca Chief, who was making his first start in 219 days, by half a length.

Mark Perrett, husband and assistant trainer, said: “He is such a star. He is a lovely horse to have around. At the moment he is in real good shape mentally with himself. He came out after Epsom on Sunday and I put him in the paddock and he jumped and kicked and set off round the paddock as happy as Larry, so that is why we ran him again today.

“He was only beaten just over four lengths (in the Dash) and the track wouldn’t have been great for him down that hill as he is much better at meeting the ground.

“He (Marco Ghiani) is riding well. He was having a good run, he had a quiet spell but he is now back on a good run again. Fair play to him, he gave him a lovely ride.

“The blinkers just give him that bit extra, especially over five as it puts him on the job a bit more.”