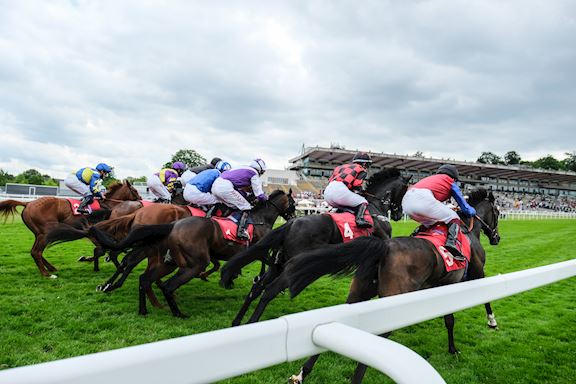 Sandown Park hosted the first of two consecutive days’ racing on Friday with an eight-race card.

There were plenty of talking points and some winners who might go on to bigger things as the season progresses. 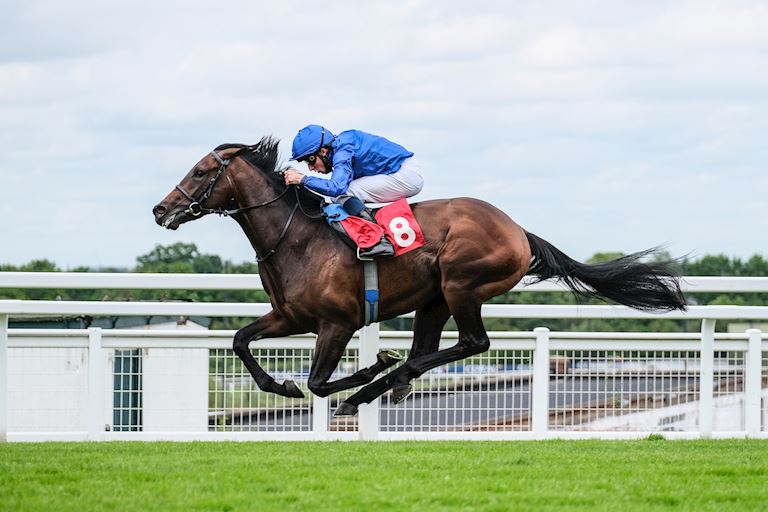 Native Trail could be given the chance to emulate stablemate Master Of The Seas in next month’s bet365 Superlative Stakes at the Moet & Chandon July Festival at Newmarket following his impressive debut victory at Sandown Park on Friday.

Having saddled this year’s QIPCO 2000 Guineas runner-up to glory in the Group Two prize 12 months ago, trainer Charlie Appleby is considering aiming the Oasis Dream colt at the same seven furlong contest on July 10th after he proved a cut above his rivals on his racecourse bow.

Despite taking time to hit top gear in division two of the Chasemore Farm EBF Maiden Stakes, the well-supported 8-11 favourite quickly put matters to bed once given clear daylight by William Buick before crossing the line four lengths clear of Royal Patronage.

Newmarket handler Appleby, speaking away from the track, said: “I’m very pleased with him. He was a Breeze-Up Sales horse and he breezed well, hence why he was purchased.

“We felt he was not going to be a Royal Ascot type therefore we gave him a bit of extra time and he has thrived. Going into today we thought he would be a big player and he had worked with Albahr who won at Haydock on Wednesday, so that gave us a bit of confidence.

“He has got a good mind for a breeze-up horse and hopefully he will keep progressing. On his page he has a bit of speed and so as he gets stronger he might just get quicker.

“Coming out of today’s race we will probably look at something like the Superlative Stakes with him.” 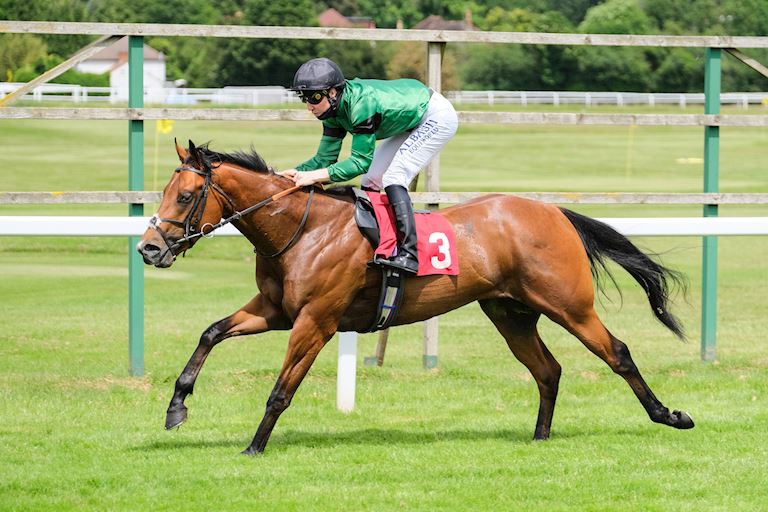 If it ain’t broke then don’t fix it, so the old saying goes. So perhaps it’s no surprise that trainer David Loughnane is already preparing for a return to the Esher track for a tilt at the Listed Dragon Stakes for Mojomaker.

The 8-13 favourite made it third time lucky when dispatching his rivals by six lengths in the opening race, the five furlong British Stallion Studs EBF Novice Stakes.

And Loughnane, speaking away from the track, said: “We always thought a lot of him and there was a reason we took him to the Lily Agnes first time out at Chester as we thought he was good enough to win there.

“He didn’t handle the track on the day but he left that well and truly behind at Goodwood last time. I think he should have won but he threw the race away.

“He can hang a bit and be a bit of a lad but we put a new bit on his bridle today and it has worked a treat. Pat (Cosgrave, jockey) got off him at Goodwood and said he would love to run him over five furlongs at Sandown. We were very bullish coming down.

“There is a Listed race back here next month and we will probably look at something like that ahead of the Molecomb at Goodwood.”

EPSOM HERO DWYER FOLLOWS UP WITH A 107-1 DOUBLE 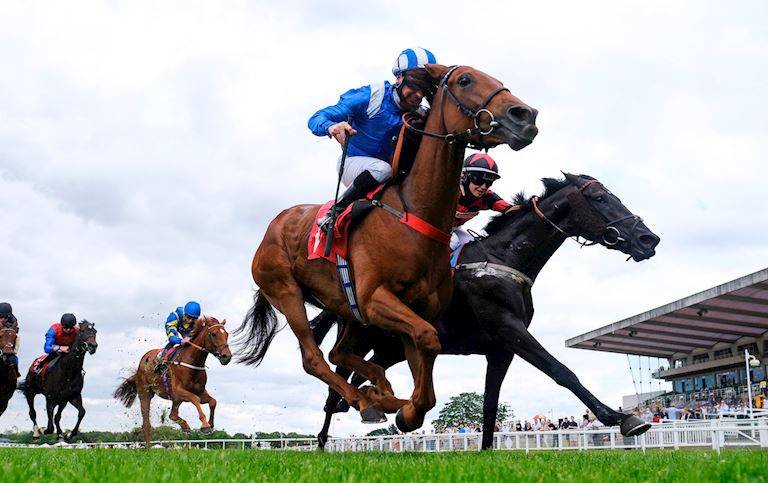 Seven days ago Martin Dwyer couldn’t keep the smile off his face as he completed the Epsom Downs Group One clean sweep by winning the Coral Coronation Cup with Pyledriver.

The popular jockey already had Oaks and Derby victories on his CV but success at the Surrey track last Friday was the icing on the cake, especially as it was a first Group One winner for trainer William Muir, who also happens to be his father-in-law.

Fast forward a week and Dwyer was back among the winners at nearby Sandown Park, celebrating a 107-1 double which was secured by the neck success of Haizoom (11-1) in the #Lovetheracehorse Handicap.

The jockey said of his winner, who is trained by Marcus Tregoning: “Marcus was confident she would stay a mile and three quarters. She is still a bit of a baby but I wanted to make use of her stamina but get a lead at the same time. She dug deep when she needed to and I think she will be winning more races.” 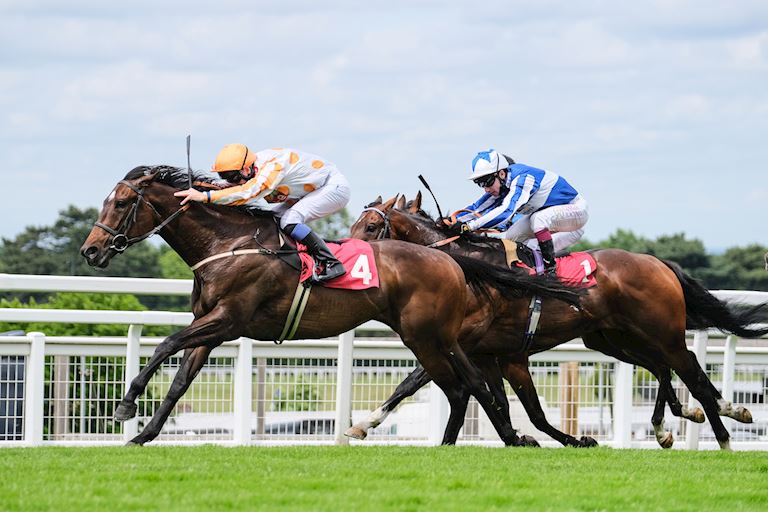 Shuv H’Penny King (8-1) from the William Muir and Chris Grassick yard had earlier got the ball rolling for Dwyer when backing up his last time out Wolverhampton success by a length and a quarter in the Sandown Park Supporting #Racingwithpride Handicap.

Dwyer said: “He is an improving horse but he has done well today and has enjoyed the track. I thought he would win at Newmarket but he didn’t handle the track.” 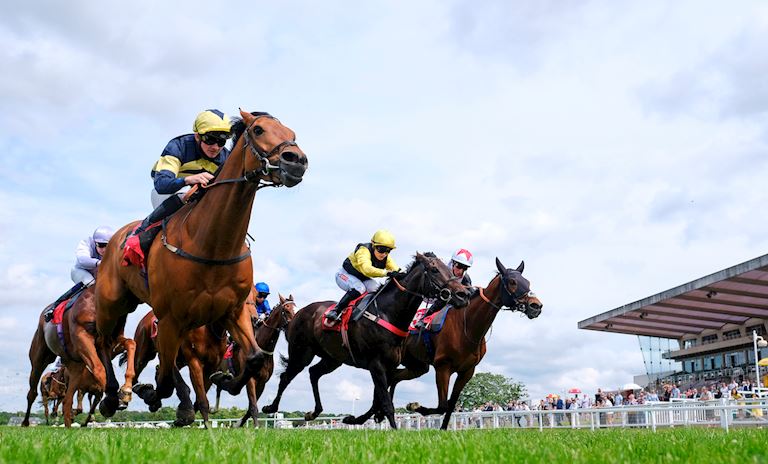 Horses for courses is an adage which finds its way into conversations every day, but there is no setting more apt than on a racecourse.

It’s also beginning to apply to the Jonathan Portman-trained Sweet Reward, who followed up his victory at the track 15 days ago to win by half a length in the feature Sandown Park Breeders’ Day September 15 Handicap.

Portman said of the 11-2 winner: “He seems to like it here. He is tough, brave and he stays and Rob Hornby knows how to ride him. He doesn’t like sharp or undulating tracks but this track seems to bring out the best in him.

“It is great for the Old Stoic Racing Club. I was worried about him staying the mile and a quarter on soft ground last time but I had none of those worries today.”

We get the feeling we’ll be welcoming him back to Esher again soon.

FAST-FINISHING SECRET BOX GETS OFF THE MARK

A reminder, if it were needed, that racing is celebrating the thoroughbred in all its glory later this year was provided by the National Racehorse Week September 12-19 Handicap.

Cheveley Park’s 8-1 chance Secret Box might not have been everyone’s idea of the winner before the 1m 2f contest began, with only two fourth placed finishes and a third to his name.

However, the Sir Mark Prescott-trained gelding was quickly steadied into the race and held up in the rear until Luke Morris made his move just over a furlong from home.

The pair produced a strong finish and led from 150 yards out to score convincingly by a length and a quarter and was still going away from the rest of the field as he crossed the line.