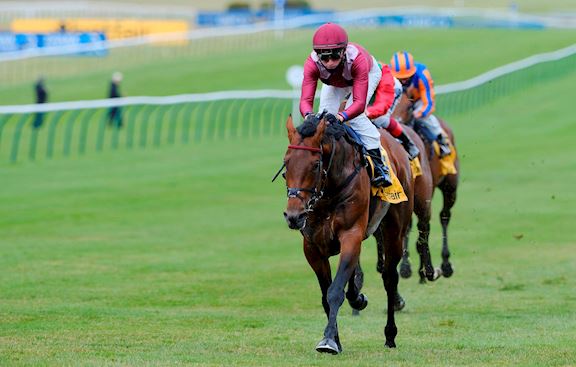 John Gosden believes Mishriff can claim a first British Group One success in what promises to be a fascinating clash of the generations in the 125th running of the Coral-Eclipse at Sandown Park on Saturday (July 3rd).

Last year’s Prix du Jockey Club winner will attempt to land a first domestic top level success at the weekend on his first start in Britain this year in the prestigious Group One prize.

It has been a campaign to savour so far for the son of Make Believe who made a winning return in the Saudi Cup at Riyadh on his dirt debut in February before following it up with Group One victory on his first start over a mile and a half in the Dubai Sheema Classic at Meydan the following month.

Although Mishriff has demonstrated his talents on an international stage Gosden, who is seeking a fifth Coral-Eclipse success, feels he must now translate that form back on home soil.

He said: “I think that it is absolutely right (that he needs to win a British Group One to be one of the best mile and a quarter horses around). He has done it in France and done it in the Middle East but he needs to do it in the UK.

“We’ve been happy with him. He trained nicely into the Saudi Cup and then flew home then had to train again for Sheema Classic. He showed his versatility having to do a mile and an eighth on the dirt and a mile and a half on the turf.

“The idea was to freshen him up and give him every possible chance to come back in for our summer programme. We are starting him off here in the Coral-Eclipse which had been our plan for a long time. I’ve been very happy with his preparation. He is not a horse I’ve taken away for a racecourse gallop as he has had enough travelling this year already.”

Despite this year’s Coral-Eclipse attracting only four runners, Gosden insists it is very much a field of quality over quantity.

“When you have the likes of the front three here they are not easy to take on so I think people slightly take that view point.

Assessing the opposition Gosden has respect for both this year’s French 2000 Guineas and French Derby winner St Mark’s Basilica from the yard of Aidan O’Brien and his old adversary the William Haggas-trained Addeybb, who he finished behind in last year’s Champion Stakes at Ascot.

Gosden continued: “I’ve got tonnes of respect for Addeyyb. I think he is a wonderful horse. He has won a Champion Stakes and he has won in Sydney.

“There is talk about some rain on Saturday afternoon and if the rain came that is something Addeyyb would enjoy immensely. We are probably happier on anything from good to firm to good soft. I’ve lots of respect for him then comes the big question and it is great that you have the best mile and a quarter three year old colt in Europe (St Mark’s Basilica) running. He has won a Dewhurst, a French Guineas and he has gone and won the Prix du Jockey Club, the same as Mishriff did, so that really is the ultimate test of the three year olds against the old ones.

“Interestingly enough I remember Lester (Piggott) saying to me that the three year old has the advantage in his opinion in the Coral-Eclipse with the weights.

“I know it has changed one pound since those days and it is a 10lb difference now but he always felt three year olds had the edge and I’ve never been frightened to run three year olds in this race and nor for that matter in the King George.”

Helping Mishriff reach the heights he has enjoyed this year has been his growing bond with jockey David Egan, whom Gosden offered plenty of praise for.

He said: “He (David) has ridden him very well and he knows the horse well. He pops up on him not long before races.

“We have Ben (De Pavia) here who rides him all the time in his work and every day in his exercise. David is a classy guy, a good rider a good horseman and he is bright and very intelligent with it.”

Since claiming the Coral-Eclipse for the first time with Nathaniel in 2012 the Newmarket handler has won the race on three further occasions with Golden Horn, who followed up his Derby success at Epsom Downs in the 2015 renewal, Roaring Lion (2018) and Enable (2019).

Although Mishriff has yet to prove himself domestically at the highest level, Gosden feels he is the right type of horse to join his previous winners on the race’s outstanding roll of honour.

He added: “Roaring Lion was a three year old when he won it and so was Golden Horn so they took advantage of the weights. Enable was coming back off after a long layoff and she had her old friend Magical with her, then last year she ran against Ghaiyyath (finishing second).

“To that extent it is always demanding but he is a lovely horse and he fits in with that type we have been fortunate to have. We are happy with him going in but I’m perfectly aware of the task in hand. He is a very game honest horse that wears his heart on his sleeve.

“We are hoping for a good race and for the purists it is the sort of thing they enjoy but you will probably find the outsider El Drama will come and do the lot of them.”