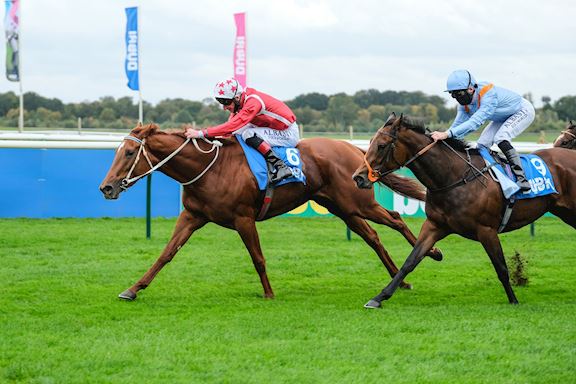 Jane Chapple-Hyam believes she is “doing the right thing” by dropping stable star Saffron Beach down in class in an attempt to restore her confidence in the Betway Atalanta Stakes at Sandown Park next month (Saturday 21st August).

The Newmarket trainer has earmarked the mile Group Three contest as the next port of call for this year’s QIPCO 1000 Guineas runner-up, who has yet to taste victory in any of her four starts so far this season.

After filling the runner-up spot in both the Group Three Lanwades Stud New Gwyn Stakes and Group One QIPCO 1000 Guineas on the Rowley Mile at Newmarket in the spring, the New Bay filly then finished down the field in the Group One Cazoo Oaks at Epsom Downs in June, her first start over a mile and a half.

Saffron Beach then suffered a fourth straight defeat on her latest start back over a mile when 11th of 13 in the Group One Tattersalls Falmouth Stakes at Newmarket’s Moėt & Chandon July Festival. However, Chapple-Hyam insists a line can be put through that effort and is now keen to move on.

Chapple-Hyam said: “We are doing the right thing dropping her back down to a Group Three. The stiff mile should be right up her alleyway and it should help get her confidence back.

“Given her form and where she is at we are there to give it a go. I think she will love the finish up that hill at Sandown.

“As long as the ground is not like was on Oaks day or the Friday of Royal Ascot, then she will be alright.”

Although Saffron Beach only beat two rivals home last time out, Chapple-Hyam stresses it was not a disastrous performance in the circumstances.

She added: “She scoped dirty after the Falmouth but you don’t know they have a mucky lung until you put them under pressure in the race.

“She never had a cough and didn’t show any signs of having anything wrong - it was only when we scoped her half an hour after the race we found it was dirty. She had five days of antibiotics and we went easy on her for 12 days but she is back doing her normal routine now.

“If you watch the Falmouth back she was in there cantering. She got a bit of a bump and was the meat in the sandwich as it got a bit messy three furlongs out.

“That didn’t bother her - she just couldn’t go through with her effort with her mucky lungs.”

Meanwhile Chapple-Hyam intends to bring fellow three year old filly Bellosa back for an autumn campaign, having decided to give the daughter of Awtaad a summer break following the first defeat of her career in the Group Three Jersey Stakes at Royal Ascot.

Prior to losing her unbeaten record Bellosa had made a winning debut over seven furlongs on the Rowley Mile on April 15th, before following up over course and distance in the Listed Betway King Charles II Stakes exactly a month later.

Her trainer explained: “We decided to give Bellosa the summer off before bringing her back for an autumn campaign as we just felt she had a couple of hard runs.

“She has had a growth spurt and has filled out. Hopefully we can have a good September and October with her.

“I always thought she would go with give in the ground but I think it was maybe just too extreme at Ascot for a three year old who, going into it, only had two starts.”

Chapple-Hyam is keen to keep Bellosa over seven furlongs for the time being, but admits she may look at races abroad for the Sir Edmund Loder-owned filly if suitable opportunities cannot be found at home.

She added: “I think we will stick at seven with her but we might have to look at taking in some races in France and we could end up running on the all-weather at Deauville at some point.

“Sometimes it is a blessing in disguise giving them a summer break as they just bloom and she certainly has.”