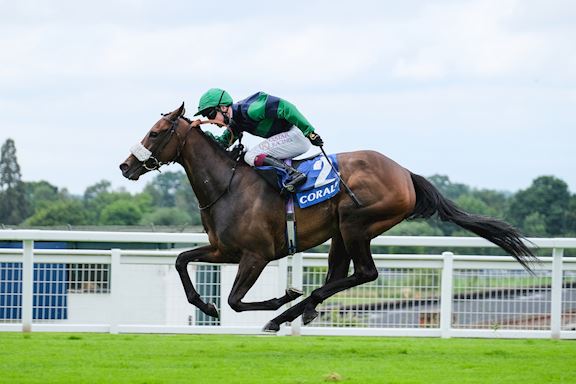 Newmarket handler Jane Chapple-Hyam also hopes Group One winning rider Hollie Doyle and Saffron Beach can hit it off immediately by proving a winning combination when teaming up together for the first time in the Betway Atalanta Stakes.

The New Bay filly will drop down to Group Three level for the first time since finishing second in the Nell Gwyn Stakes at Newmarket in April when taking on 10 rivals in the mile prize.

Since her reappearance run Saffron Beach has raced exclusively at Group One level, having taken second in the QIPCO 1000 Guineas before finishing down the field in both the Cazoo Oaks and in the Tattersalls Falmouth Stakes.

Chapple-Hyam said: “Adam Kirby can’t do the weight and David Egan is at York but we have managed to secure Hollie Doyle. Hollie came and sat on her on Wednesday and did a strong canter up Long Hill and she loved her.

“She scoped dirty after the Falmouth but she has had a course of antibiotics. We re-scoped her after that and she was clear and she has been clear ever since.

“I’m happy with the way she has trained and I can’t fault her. I think she will love the stiff finish there. She certainly does deserve more Black Type. I’m happy with her and so is Hollie and it would be nice if they could be a winning combination.”

Last season’s Group One Fillies’ Mile runner-up Indigo Girl is expected to improve considerably for her comeback fourth in a Group Three event at Ascot according to joint trainer John Gosden.

He said: “She has only had the one run this year as she has had a series of niggles that have held her back. Hopefully she will come forward for her first run.

“She over raced a little bit and she didn’t end up seeing it out. She is a strong willed filly and as long as she puts her best foot forward she has got the ability.

“As long as she starts reproducing what she showed last year, she will have a chance.”

Auria will attempt to follow up her last time out Listed course and distance victory in the Coral Distaff on July 3rd by giving Classic-winning handler Andrew Balding his first success in the race.

Balding said: “She is an improving filly and is already a course and distance winner. There is some rain around which will suit her.

“She will stay further than this in time but she did it well here the last day but this is a much stronger race and it has been the plan since she won here last time.

“She is a very straightforward filly and we know the family well as she is a half-sister to Chil Chil and Beat The Bank.”

Meu Amor, who claimed Listed honours at Carlisle earlier this year for her previous trainer Ralph Beckett, is expected to make her presence felt on her debut for Newmarket handler Michael Bell, provided she sees out a mile for the first time.

Bell said: “She seems in very good form and has settled in well here. I’ve not done a huge amount with her. She is already a Listed winner but are taking a punt going up to a mile but on her pedigree she has got a good chance of getting it.

“It is quite a deep race but if she stays she will be involved. She is very uncomplicated and is easy to train. She needs top of the ground and that was not the surface she had last time.”