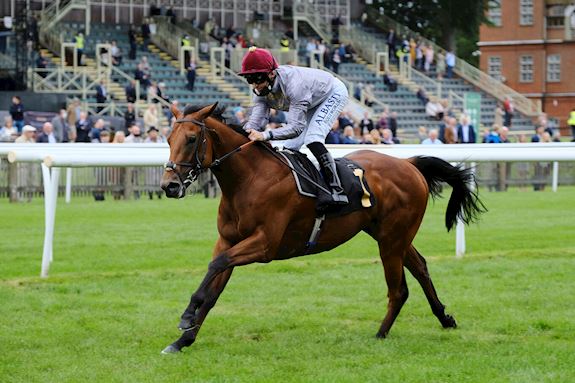 Irish trainer Michael O’Callaghan expects Rerouting to be “well suited” to Sandown Park when putting his unbeaten record on the line in the Betway Solario Stakes on Saturday 21st August.

The El Kabeir gelding, along with stablemate I Am Magic, features among 11 entries which have been received today for the Group Three contest.

In recent seasons the seven-furlong prize has been captured by the likes of 2018 Derby hero Masar (2017), and Too Darn Hot (2018), who followed up with Group One victories in the Darley Dewhurst Stakes at Newmarket later in the year before adding further top level wins to his name the following campaign in the Prix Jean Prat at Deauville and Sussex Stakes at Goodwood. Kingman, successful in 2013, went on to annex four Group One prizes as a three year old – the Irish 2,000 Guineas, St James’s Palace Stakes, Sussex Stakes and Prix Jacques Le Marois – and was officially rated the joint-best three year old to have raced anywhere in the world in 2014.

Sent off a relatively unfancied 33-1 chance in a seven furlong maiden at Gowran Park on 11th August, Rerouting, who is also owned by Curragh-based O’Callaghan, managed to outrun those odds to make a winning start under Leigh Roche.

O’Callaghan said: “The plan at the moment is to send Rerouting over to Sandown out of the two of them.

“He is a nice big horse that won well the first time out, given the circumstances with it being his first outing and what have you.

“He should cope with the quick turnaround. He had worked well before his first run but we are now stepping up into stakes company, which is another level.

“Gowran Park is a stiff seven so he should be well suited to Sandown.

“The Solario wasn’t a race we had in mind but after he won his maiden we were trying to find a stakes race and there were not many opportunities in Ireland.

“The ground at Sandown should be fine as it looks like it will be similar to what he won on over here.”

Among those Rerouting could take is the John and Thady Gosden-trained Reach For The Moon, homebred by The Queen. The Sea The Stars colt went one better than in the Chesham Stakes at Royal Ascot with an impressive victory at Newbury on his most recent start on July 16th.

Richard Hannon, who saddled Etonian to glory in the race 12 months ago, has entered Lusail, winner of the Group Two Superlative Stakes at last month’s Moet & Chandon July Festival at Newmarket while first time out Newmarket winner Star From Afarhh could represent the Andrew Balding yard.

QIPCO 1000 Guineas runner-up Saffron Beach is the stand out name among 16 entries in contention for the Betway Atalanta Stakes.

Having finished down the field in the Tattersalls Falmouth Stakes at Newmarket on her most recent appearance the New Bay filly remains on course to make her first start outside of Group One company this season in the mile Group Three.

Last year’s winner Maamora, from the yard of Simon and Ed Crisford, is joined on entry list by the Amanda Perrett-trained Lavender’s Blue, who secured victory in the 2019 renewal of the race for her owner-breeder Benny Andersson of ABBA fame.

Sir Michael Stoute chances of securing a record extending seventh success in the race rest with Ville De Grace, and the Cheveley Park Stud-owned pair of Lights On, a Listed scorer and Potapova, who won her first two starts impressively before finishing down the field in the Group One Coronation Stakes at Royal Ascot.