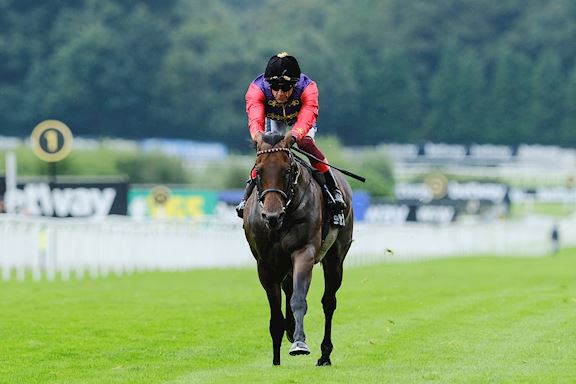 The highlight was the success of The Queen’s homebred Reach For The Moon in the Group Three Betway Solario Stakes, leaving connections dreaming of Classic glory in 2022.

Elsewhere on the card, QIPCO 1000 Guineas runner-up Saffron Beach bounced back to something like her best in the Betway Atalanta Stakes and a return to Group One company now looks imminent.

Reach For The Moon enhanced his Classic credentials for next season after securing the biggest success of his career to date with a facile victory in the colours of The Queen in the Betway Solario Stakes.

Arriving on the back of an impressive success in a novice event at Newbury 36 days ago the John and Thady Gosden-trained Sea The Stars colt, who was also bred by The Queen, took another step forward when proving a cut above his rivals in the Group Three contest to secure back-to-back wins.

After sitting just off the pace the 2-5 favourite swept to the front of the field at the two pole before quickly putting daylight between himself and his rivals in a matter of strides.

Maintaining a resolute gallop in the middle of the track all the way to the line Reach For The Moon eventually passed the post four lengths clear of Great Max, who was in turn a short head clear of the previously unbeaten Rerouting.

Having saddled the likes of subsequent Group One winners Too Darn Hot (2018), Kingman (2013) and Raven’s Pass (2007) to glory in the race when training on his own, it was a first victory in the race for John Gosden since teaming up with his son Thady this season.

John Gosden said: “They didn’t go much pace so Frankie thought he would get on with it. He didn’t think he would go to the front that fast and go that far clear. He did well as he has learned a lot running up the Sandown hill on his own but he has showed a bit of class I thought.

“You have got to look towards the autumn and we would like to wind up in one of those nice Group Ones and we will see how he is over the next few days and make our decision.

“I know a lot of trainers and jockeys that need a red hood on at the start! He is just lively but nothing more than that, he doesn’t pull. He is very progressive and has done everything right. He has developed and strengthened.”

Equally delighted with Reach For The Moon was winning rider Frankie Dettori.

He said: “He was quite babyish at the beginning of his career. He was quite coltish and not concentrating. With racing he is getting better and better and. Today he stopped his antics a little bit and he was focusing better. He has got a good size, a wonderful stride and he has got gears. He is a very exciting prospect.

“I was a bit concerned about the slow pace at the beginning so I set him for home a long way out. Normally I wouldn’t do that but I didn’t want to sit and sprint as he is such a big horse. He went through the gears and put daylight between them and felt good on top.

“We feel like the more he is racing the better he is getting, so I suspect you will see him out a couple more times before the end of the season. He is a good size so you would expect him to train on. I suspect the Dewhurst could be the plan.”

The Cazoo Derby is the only Classic that The Queen, who is due to celebrate her Platinum Jubilee in 2022, is yet to win. The closest Her Majesty has come to Derby success was in the Coronation year of 1953, when Aureole was runner-up to Pinza.

Reach For The Moon is out of The Queen’s dual Listed winner Golden Stream. Golden Stream’s earlier progeny include Invictus Prince, a Group One runner-up in Australia behind the outstanding Winx.

Jane Chapple-Hyam admitted she was delighted to see Saffron Beach set up a return to Group One company in “dominant fashion” after getting her career back on track with a clear cut success in the Betway Atalanta.

Since finishing second in the QIPCO 1000 Guineas at Newmarket in May, little has gone right for the New Bay filly, who in two subsequent runs has finished down the field in both the Cazoo Oaks at Epsom Downs and in last month’s Tattersalls Falmouth Stakes at Newmarket.

Reverting back to Group Three company for the first time since filling the runner-up spot in the Nell Gwyn on her seasonal return, Saffron Beach looked back to something close to her best when dispatching her nine rivals with the minimum of fuss under Hollie Doyle. Doyle was partnering the filly for the first time today.

Racing close to the pace throughout in the mile prize the 9-2 chance kicked on into a lead she would not surrender inside the final two furlongs before pulling out plenty on the climb to the line to defeat recent Listed winner Waliyak by two and a quarter lengths.

Chapple-Hyam said: “She tried hard and it was a great ride from Hollie. She really enjoyed coming up the hill the last two furlongs.

“We had our hiccup in the Oaks and a hiccup in the Falmouth where she scoped dirty afterwards and she has come back here as the filly we know that she is.

“It was important today just because we believe in the horse and I had to drop her back to a Group Three, just to get the horse’s confidence back as much as anything.

“It was great that Hollie came and rode her on Wednesday to get to know her. I’m thrilled she has been able to do it today in a dominant fashion. Hollie said she had a lot of horse underneath her.

“She is in the Sun Chariot obviously but would one have a little go at the E.P Taylor (staged at Woodbine, Canada on 17th October) as you know me I love to travel.

“I made my decision in the Oaks and it was wrong so I think I have to leave it to the owners.”

It was a first ride aboard Saffron Beach for Group One-winning jockey Hollie Doyle, and she believes victory at the highest level is not beyond the reach of the three year old.

Doyle said: “I was very impressed. I was surprised she went off the price she did as on form figures she had the best in the race if she turned up and she did.

“I got to know her Wednesday and she gave me a great ride then. It is just good to get to know what you have got underneath you before you ride in a big race like this.

“She settled beautifully today and that ground probably slowed her down a bit and she dropped her head.

“I knew she would get a bit further so I committed two down and she ran through the line. I just wanted to get her a lead and get her switched off. Jane said this stiff mile would suit her.

“I think she would get 10 furlongs but ridden like that I don’t see why she can’t stay at a stiff mile. You would like to think somewhere along the line she could be competitive at Group One level.”

Richard Kingscote described William Haggas as a “phenomenal trainer” after providing him with his 100th winner of the year when coming from last to first aboard Hamaki in the Betway Nursery Handicap.

The cricket-loving Newmarket handler reached a century of winners for the ninth year in succession after the two year old Churchill colt followed up his last time out success at over Pontefract on his return to seven furlongs.

Despite having more horses in front of him than behind, turning in the 13-2 chance made good late headway to pass recent Beverley scorer, and eventual runner-up Implore, inside the final furlong ahead of going on to score by a length and a half.

Kingscote said: “I thought I’d be a little bit closer but he just idled a little bit in front at Pontefract so it was nice to be able to take aim at them. He liked getting his toe in a little bit so things worked out nicely for me.

“I was happy he got up the hill well and he picked up well in that ground. Now the penny is dropping he is going the right way.

“William is a phenomenal trainer and he is brilliant to ride for and it is nice to get him another winner.”

King Of Clubs drew the loudest cheer of the afternoon when getting the better of a photo finish to secure an 18.25-1 double for Hollie Doyle in the Heed Your Hunch At Betway Handicap.

Benefitting from a well-timed ride from Doyle the Hughie Morrison-trained son of Intello, returned at 5-2, got his head in front for the first time since scoring at Nottingham in May when getting up on the line to defeat Victory Chime by a nose in the 10-furlong contest.

Doyle, who had earlier claimed Group Three glory aboard Saffron Beach in the Betway Atalanta Stakes, said: “I was in front one stride after the line but whether I got there I didn’t think I had to be honest. They went very quick.

“Hughie said make sure you settle him but within a few strides I couldn’t go any quicker. I was actually behind the bridle up the back straight but I latched on to Frankie (Dettori, aboard Poet Of Life).

“It has just taken him a while to get into a rhythm. It is probably not the ground he wants but he has gone on it. He had no weight on his back and that was a big plus in this ground. He will get a mile and a half at the back end of the year.”

Oisin Murphy strengthened his position at the top of the Flat Jockeys’ Championship with a 9.7-1 double of his own secured by the Saeed Bin Suroor-trained Silent Escape, who routed her rivals by three and a half lengths in the #Betyourway At Betway Handicap over seven furlongs.

Murphy said of the successful 11-8 favourite: “She is a big strong filly that will continue to improve and Saeed’s horses are flying having also just had a big winner at York.

“I hope she can perform at Listed level as that would be nice. She was very straightforward in the race. They didn’t go very fast and she relaxed well.”