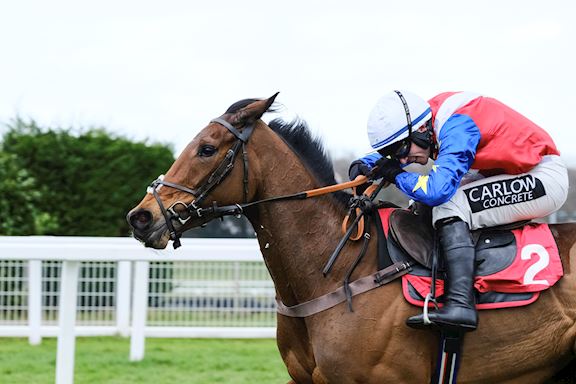 Arriving on the back of a hat-trick of hurdle wins this season, the Westerner mare made light work of the testing conditions to secure the biggest success of her career to date when grounding out victory from the front in the Grade Two feature under Johnny Burke.

Having proving keen early on the 10-11 favourite soon settled into a nice rhythm out in front in the 2m 4f prize before being pursued by chief market rivals Speech Bubble and Nina The Terrier entering the home straight for the final time.

Despite taking the roots out of the second last it failed to stop the momentum of the odds-on favourite who galloped on all the way to the line to defeat Speech Bubble by two and a quarter lengths.

Fry, who won the 2016 renewal with Jessber’s Dream, said: “Watching her go out to racecourse, going down to post and through the race she was doing everything wrong she possibly could.

“Once she got to the front she settled and she kept coming out of his hands. She kicked the second last out of the ground and she has done everything she can to get beat but she has still won.

“Although I’m delighted to win the race I’m not overly pleased the way she has gone about it. She was keen the first day she won for us.

“We dropped back to two miles the last day but we went back up in trip today. To me she was just on her toes even before Johnny got on in the paddock. It was great she won the race but the manner she has done it is not as professional as I’d like.

“We will get her home enjoy this as this was the target. We picked this after Warwick going to Lingfield was a bit of a bonus with conditions to suit. She is four from four for us and has done brilliantly.

“I should be jumping up and down as we have won a Grade Two and that is four on the trot, but as much as I’m relieved to win she has gone about it the wrong way which tempers the enthusiasm slightly.

“She just seems to have her own way. If anyone would have said to me at the start of the season we would have won four on the bounce I would have laughed at them.

“I’m delighted with her to have won and kept her unbeaten record but there is room for improvement, to say the least.”

Following the race Fry hinted that an outing at Cheltenham in the Grade Two Parnell Properties Mares’ Novices’ Hurdle at The Cheltenham Festival, for which she was trimmed from 12-1 into 8-1 by Paddy Power, could be on the cards.

He added: “She is in that race but it is only over two miles. We will see how she comes out of this as this was the plan. One thing I would say is that it would have to be testing for her to go there.

“The other race that I thought about, which was my first ever Grade One winner with Bitofapuzzle at Fairyhouse, was the Grade One mares novices’ hurdle at Easter.

Niall Houlihan made sure this campaign will his best in the saddle after eclipsing his previous best seasonal total when celebrating his 18th winner of the campaign aboard Manucci in the opening Virgin Bet Conditional Jockeys’ Handicap Hurdle (2m).

Having equalled his previous best tally of 17 winners, which he set last season, in January, the 21 year old moved past that mark after steering Gary Moore-trained 3-1 favourite to a front running 12-length success on his sole ride at the track.

Houlihan said: “Coming here to Sandown today on a Thursday and riding a winner on my only ride is great.

“Improvement is key in this game. I’ve not got a set total I’d like to reach I just want to keeping riding as many winners as I can and make plenty of contacts.

Reflecting on his season so far, Houlihan has selected several moments that standout above all others.

He added: “Both my wins on Editeur Du Gite at Cheltenham were special along with riding a treble at Plumpton which is my local track.

“The first leg of the treble was riding a winner for my uncle Pat Phelan which was great.”

Lucinda Russell thanked her partner, the retired eight-time champion Jump jockey, Peter Scudamore, following the victory of Douglas Talking, who maintained his unbeaten record over fences with a three-length success in the “Ubique” Handicap Chase (2m).

Russell said of the successful 15-8 Favourite: “It was amazing. I turned to Scu (Peter Scudamore) after he jumped the second and said why are we bringing this horse here as it is only his second time over fences, but that was why as he does jump brilliantly. He is lovely.

“He is just a different horse over fences. He was very keen over hurdles and he wouldn’t settle and we spent a lot of time teaching him how to settle.

“We weren’t sure what distance to run him over so we started him over 2m 4f at Musselburgh a couple of weeks ago. You can see he just gets it and is a much happier horse over fences.

“We could have gone to Ayr but it is a nice prize Scu said he would be suited by the track and as usual he was right.”