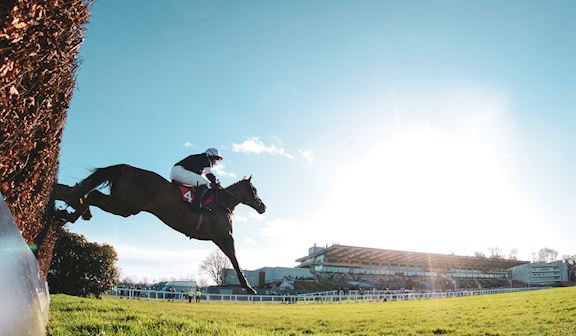 Major Charlie O’Shea paid tribute to late trainer Richard Woollacott after securing the most notable victory of his career aboard Rolling Dylan in the Castel Royal Artillery Gold Cup at Sandown Park.

The 40 year old rider, who served with 29 Commando Regiment Royal Artillery for much of his time as a regular, got the perfect tune out of the evergreen 11 year old in the military amateur jockeys’ prize.

Despite O’Shea hitting the front earlier than anticipated in the 3m contest, it failed to prevent the Philip Hobbs-trained Indian River gelding from claiming his first victory under Rules in almost four years.

O’Shea, who lives in Hayle, Cornwall, said: “It was brilliant. It didn’t go to plan as we planned to take a lead as he is not always the best in front.

“The ground wouldn’t have suited him perfectly today either but he was in the right mood and his jumping took us to the front.

“While he was happy there, we just stayed there. Coming up the straight I thought is he going to stop but we judged the pace pretty well and he was happy as Larry.

“It is great to win it and there was going to be a new winner as none of us in there had won it before.

“The day is amazing, as is the history of it with the amateur nature of the race. It is a great track and a real pleasure to come round and jump a track like this.

“I’ve got to say the late Richard Woollacott set me on a track to come here and I rode a horse for him on my first military race ride. Without him, I wouldn’t be here.

“The enthusiasm he had for young jockeys and knowledge he had was great. He would only put you up on a horse that knew your ability would suit.”

O’Shea, who for the past five years has served as a naval gunfire liaison officer in the Royal Artillery reserves, hopes he can act as a positive influence to a number of the military personal watching from the stands.

“I had ridden as a child and hunted as well but I was 34 when I first had a go at this. I thought I would ride in one of those military races and got chatting to someone in a bar and they said we have a horse but they sold it and that start the ball rolling.

“Half the guys in the stands today would never come racing. Even if a couple of people that come here today get involved it is what the sport needs. In my eyes if we can grow it being involved with it like this it’s great and it is serving a purpose.”

Although O’Shea paid tribute to Woollacott, he was also thanked Grade One-winning trainer Hobbs for providing him with the chance to ride in the race.

He added: “I sold my pub called The Rising Sun just before Christmas so I’ve had a bit of extra time on my hands so I’ve been up to Philip Hobbs’ a few times.

“A massive thank you goes to them for putting me up on him and I’m really pleased to ride a winner as it was my first ride for them.

“It is nice when you put a bit of effort in and get a bit of payback.”

The victory was also a momentous occasion for Rolling Dylan’s temporary owner Colonel James Ferguson, who leased the gelding from Sarah Hobbs, wife of the winning trainer, for the event.

Ferguson said: “I’ve been trying to get a winner at Sandown for 15 seasons. We’ve owned horses with Philip Hobbs since 2007.

“It is my second attempt at single race leasing of a horse for this race. It has really been quite exciting the second time of leasing to have a winner in circumstances where I wasn’t quite expecting it

“I didn’t think the horse would like the going. As he is 11 years old he either decides it is a going day or not a going day but as you can see he decided it was a going day.

“The jumping was incredible it was absolutely foot perfect and it gave the leased owner a real thrill.”

Ferguson will now try and persuade Hobbs in allowing him to lease Rolling Dylan for next month’s Grand Military Gold Cup on March 8th.

He added: “That (Grand Military Gold Cup) depends on the trainer and real owner and I’ve not talked to them about it. We always do what Philip says. It might be nice to come back.”

There was further success for both Hobbs and Ferguson on the seven race card after Monviel (15-8 Favourite) added to his recent Wincanton victory when prevailing by a length and a half in the Vigin Bet “National Hunt” Novices’ Hurdle over 2m.