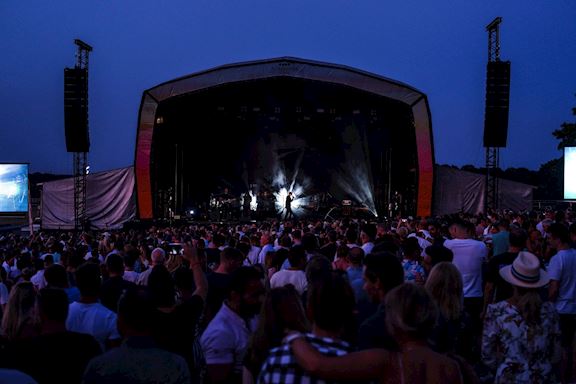 ‘AN EVENING AT THE RACES’ with BOYZONE SANDOWN PARK RACECOURSE

The Jockey Club Live presents ‘An Evening At The Races’ is proud to welcome back BOYZONE to their summer season; performing live after racing at Sandown Park Racecourse.

Having sold over 25 million records worldwide, Boyzone are one of Ireland and the UK’s biggest boybands. Known for hits including ‘Love Me For A Reason’, ‘Words’, ‘No Matter What’ and ‘When The Going Gets Tough’ they have had a total of 18 UK top 10 singles, with 6 hitting the number 1 spot and have tallied up 5 Brit Awards. Recently celebrating their 20 years as a band, they released their sixth studio album ‘From Dublin to Detroit’ last year, featuring their favourite songs from the Motown era.

There's nothing Boyzone like more than an evening at the races so we can't wait to get back to Sandown & Newmarket for some great nights of music, racing, the odd flutter and a drink or two!

‘An Evening At The Races’ offers a value for money experience unlike any other this summer. Alongside incredible headlining performances, the action kicks off earlier in the evening with 6 races - giving fans the chance to witness up close powerful equine athletes who are stars in their own right, and enjoy the thrilling drama and spectacle of them racing for glory. Whether you fancy a flutter or a dance with friends and family the event is certain to be an odds on favourite for all, with tickets only £35.

Boyzone are one of the most successful boybands in Ireland and the United Kingdom and we’re delighted to be welcoming them to Sandown Park this summer.  They played at Epsom Downs Racecourse last year and went down a storm with racegoers who enjoyed the mix of the old classics and new material and we’re very much looking forward to welcoming them to one of our London racecourses again in July.”

Joining already announced Kylie (Haydock and Newmarket) and Kaiser Chiefs (Newmarket, Sandown and Haydock), Sir Tom Jones (Newmarket and Market Rasen) and Madness (Newmarket, Haydock, Carlisle and Epsom), the addition of Boyzone to the stellar ‘An Evening at the Races’ season reinforces The Jockey Club Live as a leading promoter on the UK live scene. Delivering their best line up yet, with more announcements imminent, the series of live events will feature artists ranging from the hottest chart talent to legendary household names. The events are fast becoming renowned for combining a fun filled evening at the races with a spectacular evening concert in the informal and relaxed open-air setting of some of the world’s most famous racecourses.

The racecourses have world-class customer facilities, featuring an array of award winning restaurants that cater for all tastes, be it fine dining through to delicious bistro food. The Jockey Club venues welcome over 2million people a year for some of the UKs biggest racing events so you can be sure of the evening running as smooth as possible, whether you come by foot, car, train or even helicopter!