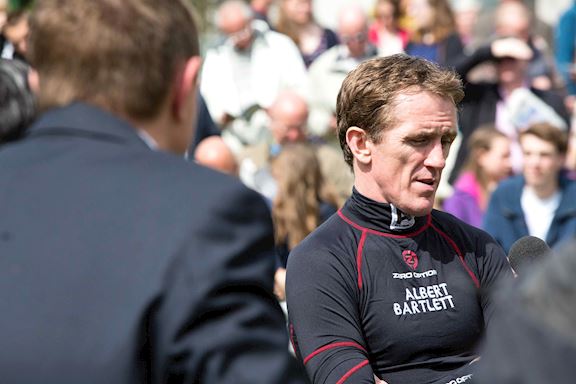 Saturday 23 April will mark a new era in Jump Racing as Richard Johnson will become the 2015/16 Stobart Champion Jump Jockey for the first time, having previously been runner-up on 16 occasions.

To mark his inaugural victory, 20-times Champion Jump Jockey, Weighing Room colleague and friend, Sir Anthony McCoy will hand over a brand new trophy to Johnson - who has ridden over 200 winners this season alone and is the only active jockey to have ridden 3,000 career winners. The presentation will take place as part of Sandown Park Racecourse’s bet365 Jump Finale fixture.

McCoy commented: “I am delighted to have been asked to present the trophy to Richard - there is no one else I would rather be handing it over to. It is a defining moment in a jockey’s career to be handed the Championship title and Richard has been waiting for this moment for a while. It is so thoroughly deserved!”

The new trophy, which has been created by British silversmith Asprey of London, is due to be unveiled later this month after the previous trophy was decommissioned and presented to Sir Anthony in honour of his twenty successive Championships.

This raceday marks the end of the British Jump season, where we celebrate Jump racing's human and equine stars. We will welcome a Parade of Equine Champions and be handing out six end of season awards before racing, these include:

This is all part of an exciting day's racing, headed with the feature race, the bet365 Gold Cup.

1. A day at the races at Sandown Park has it all with top-level racing throughout the year including the bet365 Meeting, Coral-Eclipse Summer Festival and Tingle Creek Christmas Festival meetings as well as our popular Music Nights. More information is available at www.sandown.co.uk

Stobart Group is the leading and best known Infrastructure and Support Services business in the UK, operating within the biomass energy, aviation and railway sectors as well as having investments in a national property and logistics portfolio. Stobart is a British Superbrand owning brands including Eddie Stobart and London Southend Airport.