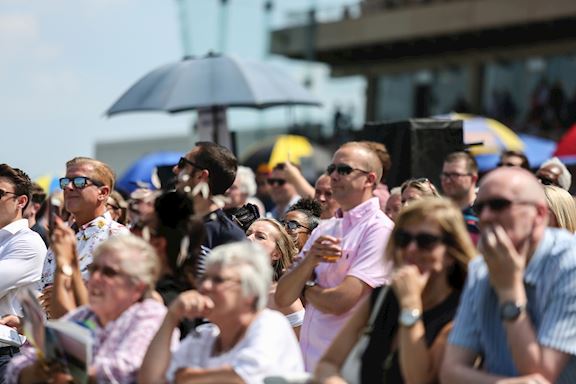 Sandown Park racecourse has today announced that BBC Radio 1 DJ Nick Grimshaw will be DJing after racing on Saturday 2 July 2016.

The BBC Radio 1 Breakfast Show host and 2015 X Factor Judge, Nick Grimshaw, will be DJing after racing from above the Parade Ring on our Coral Eclipse day. Revellers will be able to enjoy the outside bars and dance the evening away in the Parade Ring.

Phil White, General Manager at Sandown Park, said: “We’re delighted to have Nick Grimshaw DJing at Sandown Park this summer. Our Coral Eclipse raceday brings out the crowds to dress to impress for some top class racing followed by the chance to enjoy a live DJ set in the evening. We look forward to another great event this July.”

The Group 1 Coral Eclipse attracts some of the best flat racehorses over a mile and two furlongs. It is the first opportunity for younger ‘Classic’ hopeful horses to battle it out against the older horses at the highest level. Last year’s renewal was won by the Derby-winner Golden Horn, ridden by Frankie Dettori.

Sandown Park racecourse, Esher, is under 30 minutes on the train from central London.

Founded in 1875, Sandown Park Racecourse has provided the backdrop to some of the greatest moments in horse racing history. A day at the races at Sandown Park has it all with top-level racing throughout the year including the bet365 Meeting, Coral-Eclipse Summer Festival and Tingle Creek Christmas Festival meetings as well as our popular Music Nights.