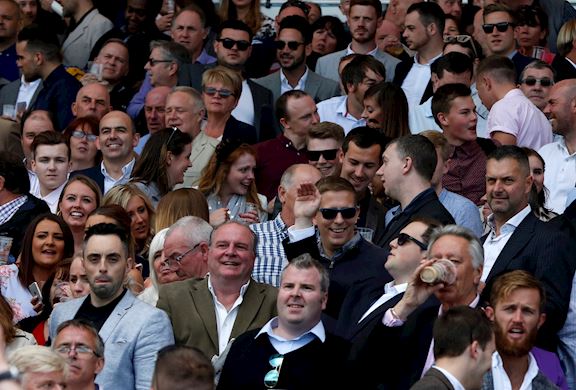 Sandown Park Racecourse today announces it will be offering more prize money during the 2017-18 Jumps season than ever before, passing the £2million mark for the first time.

Racing over jumps for the new campaign at the Esher racecourse begins this Sunday (12th November) with exciting young chaser and Cheltenham Festival winner Might Bite expected to make his first appearance of the season in the 188bet Future Stars Chase.

Sandown Park, a Jockey Club Racecourse, which will stage nine Jumps fixtures this term, is also announcing that for the first time the bet365 Jump Finale in April will offer more than half a million pounds in prize money.

The pre-Christmas highlight will be the Grade 1 Betfair Tingle Creek Chase on Saturday 9th December, worth £150,000, and then on Saturday 3rd February 2018 the Betfred Heroes Handicap Hurdle (Grade 3, 2m 7f) has doubled in prize money to £100,000. This makes it the joint most valuable long distance handicap hurdle in the calendar with the Betfair Stayers’ Handicap Hurdle at Haydock Park in November.

The season’s April climax - the bet365 Jump Finale - is the racecourse’s richest day of Jumps racing, and in 2018 will be worth £565,000, up from £485,000.  At this fixture Sandown Park will run the inaugural bet365 Novices’ Handicap Hurdle Final. Run over 2 miles and worth £100,000 this race is the final for the Novices’ Championship Hurdle Series, which was announced by the British Horseracing Authority today. This Series is made up of 36 qualifiers run between 9 December 2017 and Jump Finale and horses finishing in the first eight in any of the qualifiers will be eligible for the final. This will replace what has been the 2 mile Juvenile Handicap Hurdle on the Jump Finale card.

Andrew Cooper, Clerk of the Course and Head of Racing for Sandown Park, said: “I’m delighted to announce record prize money across our nine jump fixtures at Sandown Park this season. To get beyond the £2million mark for the first time is fantastic and the increases will be spread across every class of race.

“For our first fixture of the season this Sunday the going is currently on the slow side of Good, with some rain in the forecast. The course is in very good shape, in spite of the driest October in 20 years. We’ve attracted some exciting entries and I look forward to hopefully seeing Might Bite and Frodon take on each other in the feature race of the day, the 188bet Future Stars Chase.”

Gates open this Sunday at 10.45am, with all children gaining free entry to the racecourse. The first race is at 12.45pm and last race at 4pm. As well as the competitive seven-race card there will be a host of free entertainment for the youngsters, including pony rides, falconry displays, facepainters and the chance to meet social media star Teddy the Shetland.