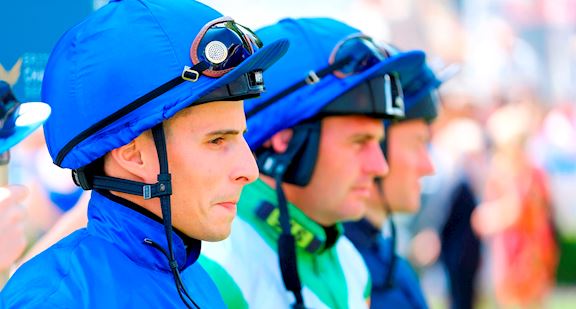 £20,000 bonus offered to winner of Martin Densham Memorial race going on to win the Solario Stakes

Entries close tomorrow for the Martin Densham Memorial EBF Maiden Stakes that will see a £20,000 bonus awarded should the winner go on to victory in the Group 3 Solario Stakes at Sandown Park on 1 September.

The Guild of the Nineteen Lubricators, of which Martin Densham was a member, have come together to offer the bonus for the first time ever in memory of Martin, who died at the end of last year. As Managing Director of Sunderlands Bookmakers Martin initiated the Imperial Cup bonus at Sandown Park. This bonus continues to be supported by race sponsors and now sees £100,000 awarded should the winner of the Imperial Cup at Sandown Park go on to win any race at the Cheltenham Festival the following week. Martin saw this bonus be paid out three times during his 15 years sponsoring the race.

The Martin Densham Memorial EBF Maiden Stakes is run over 7 furlongs on Thursday 26 July and is worth £8,000. If the victorious horse goes on to win the Group 3 Solario Stakes also over 7 furlongs at Sandown Park on 1 September the winning owner will be awarded the extra £20,000 bonus.

The winning connections of the Martin Densham Memorial race will also be awarded a perpetual trophy. The Guild of the Nineteen Lubricators have commissioned a trophy in the shape of a Sunderland Flying Boat, which is the aircraft flown by Martin’s father, Pat during World War Two. Pat founded the firm and named it Sunderlands after the aircraft and the Sunderlands Bookmaker name continues to be seen today on the rails at most racecourses throughout England, including Sandown Park. Martin`s widow Jan will present the trophy to the winning connections on Thursday.

Tony Hurley, on behalf of the Guild of the Nineteen Lubricators, the group backing the bonus, said:

“Martin Densham was a major influence within our Charitable Guild for over 30 years and worked tirelessly to help the Guild to raise many hundreds of thousands of pounds for distribution to worthy charitable causes. The Guild wants to recognise Martin’s huge contribution by sponsoring a race at his favourite racecourse, Sandown Park, and we hope that this will evolve into an annual event. Martin’s widow Jan will present a magnificent solid silver trophy of a Sunderland flying plane to the winning owner that they can hold for 12 months.”

Andrew Cooper, Clerk of the Course at Sandown Park, said:

“Martin was a huge supporter of Sandown Park and we are delighted to support the Friends of Martin Densham in offering this generous bonus. It is the first time this has been done and we’re delighted they chose to do this at Sandown Parks, where Martin had such history.”