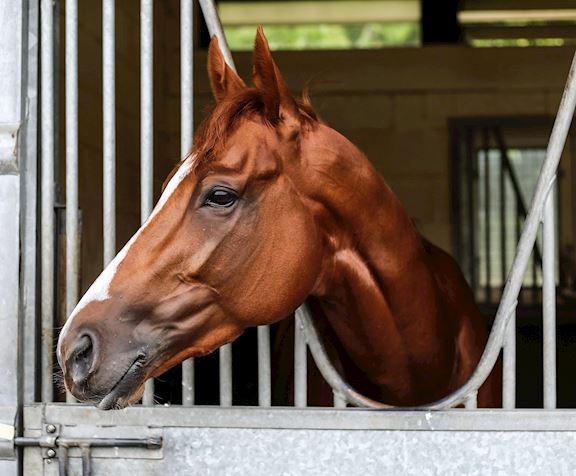 The advertised prize fund for the Coral-Eclipse already stood at £750,000, a 50 per cent increase on the £500,000 offered in 2017, and has been boosted further today following Masar being supplemented for the famous contest at a cost of £50,000.

Owned by Godolphin, the joint most successful owner of all-time in the Coral-Eclipse with five successes and trained by Charlie Appleby, Masar registered a decisive length and a half victory under William Buick in Britain's premier Classic over 12 furlongs at Epsom Downs on June 2. He is the 5/4 favourite with sponsor Coral for the 10-furlong Coral-Eclipse.

The three-year-old son of New Approach made all to run out a ready winner of the G3 Craven Stakes on his first European start of 2018 at Newmarket over a mile in April, before finishing third to Aidan O'Brien's Saxon Warrior [fourth to Masar at Epsom, 8/1 with Coral] over the same course and distance in the QIPCO 2000 Guineas in May.

Masar landed the G3 Solario Stakes over a mile at Sandown Park in September, 2017 and bids to provide Godolphin with a sixth success in the G1 Coral-Eclipse following the victories of Halling (1995, 1996), Daylami (1998), Refuse To Bend (2004) and Hawkbill (2016), who is also trained by Newmarket-based Appleby.

Masar enjoyed a workout on Newmarket's July course on Saturday under his regular work-rider Brett Doyle. He breezed seven furlongs and finished well clear of his two stable companions [Alqamar and African Jazz]. He will be ridden by William Buick on Saturday.

The Coral-Eclipse offers the first opportunity of the season for the three-year-old Classic generation to take on older horses at G1 level.

The older battalion is headed by Masar's stable companion Hawkbill, who plundered the 2016 renewal of the G1 race under Buick.

Hawkbill (20/1) captured the G1 Dubai Sheema Classic at Meydan in March and finished third in the G1 Prince of Wales's Stakes at Royal Ascot on June 20.

Opposition to the Godolphin duo is headed by the John Gosden-trained Roaring Lion (2/1), who finished two lengths behind Masar when third in the Investec Derby.

The three-year-old son of Kitten's Joy landed the 10-furlong G2 Dante Stakes at York by four and a half-lengths, having finished fifth in the QIPCO 2000 Guineas and third behind Masar in the G3 Craven Stakes at Newmarket.

The Qatar Racing Limited-owned colt also worked on the July Course at Newmarket on Saturday under Kieran O'Neill and pleased connections.

Aidan O'Brien - champion trainer in Britain and Ireland - could join Alec Taylor and Sir Michael Stoute as the winning-most trainers in the Coral-Eclipse with six victories if he were to taste success in Saturday's renewal in which he has five possible runners.

The three-year-old daughter of Galileo was last seen when a half-length fourth behind Laurens in the G1 Prix de Diane at Chantilly and would become just the third filly to win the G1 Coral-Eclipse following Pebbles (1985) and Kooyonga (1992).

O'Brien could saddle Irish Derby second and third Rostropovich (16/1) and Saxon Warrior, who finished a close third to Latrobe, trained by his son Joseph, in the 12-furlong Classic at the Curragh on June 30.

O'Brien's contingent of older horses includes 2017 Investec Derby second Cliffs Of Moher (16/1), who finished third on his latest start in the G2 Hardwicke Stakes (12f) at Royal Ascot, having run fourth in the G1 Prince of Wales's Stakes (10f) at the Berkshire venue earlier in the week. Yucatan (25/1), a length winner of a G3 contest at the Curragh over 10 furlongs on June 30, completes O'Brien's quintet of possible Coral-Eclipse starters.

Forest Ranger (Richard Fahey, 11/1) has a G2 victory on the board already this year, having captured the Huxley Stakes by a length and a quarter from War Decree (Aidan O'Brien) at Chester on May 11.

The four-year-old son of Lawman was also successful on his seasonal debut when defeating the O'Brien-trained Deauville by half a length in the G3 Earl Of Sefton Stakes over nine furlongs at Newmarket on April 18.

Fahey, based at Musley Bank Stables in Malton, North Yorkshire, revealed today: "Forest Ranger's in excellent form and we're looking forward to running in the Coral-Eclipse on Saturday.

"He needs to step up on what he has achieved during his career so far, but he has won well on both of his starts this year.

"He goes on any ground and it is a right punt by us to go for this race, but we'll see how he gets on.

"It is a big step up going back into Group One company (he finished fifth in the mile St James's Palace Stakes at Royal Ascot in June last year), but we've been delighted with his progress this season and the race fits well into the calendar.

"He is a big horse who needs some time between his races, but we've been happy with him. He probably just matured over the winter and filled into his frame as he was a bit weak last year.

"I was hoping that the Derby winner and third wouldn't turn up! However, it'll be interesting to take them on. He should be a 20/1 shot and that probably reflects his chance, but we hope he is an each-way player.

"It's a big ask, but whatever happens on Saturday, we'll be finding out a bit more about him."

It was announced earlier this year that Coral's sponsorship of the 10-furlong G1 contest has been extended for a further five years, taking the backing of what is already the longest-supported Pattern race (commenced in 1976) in Britain up until at least 2022.

David Stevens of Coral commented: "Golden Horn (2015) was the last Investec Derby winner to go on and win the Coral-Eclipse, and the betting has Masar in pole position to emulate that colt and the likes of Sea The Stars and Nashwan, with old rival Roaring Lion his closest market rival."

Coral sponsors all seven races on Saturday's card, with the G3 Coral Charge over five furlongs and worth £70,000 being the first race at 12.20pm.

The going at Sandown Park is currently Good to Firm.

The outlook is for conditions to remain dry, with temperatures in the late 20s Celsius.

Watering is ongoing, with cycles of 10 millimetres. The course has received 35 to 40 millimetres of irrigation per week.

While the racing holds the limelight, there will be plenty of other things to enjoy on Saturday at Sandown Park. The Apres area will be back with a DJ all afternoon and there will be extra seating close to food and drink outlets. Esher Hall becomes the Football Zone with plenty of seating and big screens.

Reggie Yates will be DJing after racing, so racegoers can stick around and join the party in the Parade Ring.

Sandown Park is part of The Jockey Club, which stages thrilling sporting occasions including The Randox Health Grand National, The Cheltenham Festival and The Investec Derby. Millions of people every year enjoy the special experiences we offer through racing, music, food and entertainment. Governed by Royal Charter, every penny we make goes back into British Racing to help the sport thrive. We were founded in 1750 and today we are the largest commercial group in Britain's second-biggest spectator sport, operating 15 racecourses nationwide, The National Stud, Jockey Club Estates, Jockey Club Catering, Jockey Club Live and our charity, Racing Welfare. Governed by Royal Charter, every penny The Jockey Club makes it puts back into British racing.

The Series features 35 Flat races including four of the world's top ten rated races, bringing together the finest horses, jockeys and trainers to compete for the sport's most prestigious prizes.

Hosted across ten of the UK's leading racecourses it encompasses the top British racing festivals, including the QIPCO Guineas Festival at Newmarket, the Investec Derby Festival at Epsom, Royal Ascot, the Moet & Chandon Newmarket July Festival, The Qatar Goodwood Festival, the Welcome to Yorkshire Ebor Festival at York and the William Hill St Leger Festival at Doncaster.