Altior (Nicky Henderson/Nico de Boinville) is the red-hot 8/11 favourite with Betfair for the two-mile contest. The Patricia Pugh-owned eight-year-old is unbeaten in nine starts over fences, with five of those successes coming in G1 company. His G1 wins include three victories at Sandown Park - the 2016 Henry VIII Novices' Chase and the latest two renewals of the bet365 Celebration Chase.

Altior's exploits in the 2017/18 campaign saw him earn a rating of 175 in the Anglo-Irish Jump Classification, making him the best two-mile chaser in Britain and Ireland and just one pound behind Cheltenham Gold Cup winner Native River in the overall standings.

Trainer Nicky Henderson is chasing a second Betfair Tingle Creek Chase success, having previously taken the honours with the outstanding Sprinter Sacre in 2012.

Un De Sceaux (Willie Mullins IRE/Ruby Walsh, 9/2 with Betfair) landed the 2016 renewal of the Betfair Tingle Creek Chase when scoring by a length from Sire De Grugy. A very consistent performer with a total of nine G1 wins to his name, Un De Sceaux will be making his first start since taking the two-mile Champion Chase at Punchestown in April. He earned a rating of 168 in the 2017/18 Anglo-Irish Jump Classification, making him second only to Altior in the two-mile division.

The two other runners are both second-season chasers. Sceau Royal (Alan King/Daryl Jacob, 5/1) landed four of his five outings over fences last season, headlined by an impressive 11-length victory in the G1 randoxhealth.com Henry VIII Novices' Chase at this meeting 12 months' ago.

The six-year-old, who is owned by Simon Munir and Isaac Souede, reappeared in the G2 Shloer Chase at Cheltenham on November 18, when scoring by a comfortable two and a quarter lengths from Simply Ned.

Trainer Alan King said: "Sceau Royal worked on Wednesday morning and had a pop on Monday, and we are very happy.

"It is a huge task, as we know, taking on Altior and it looks like it is going to be an absolutely corking race.

"We were delighted with his win at Cheltenham because that was his first run since February. I would like to think he has come on a little bit but he will have to." 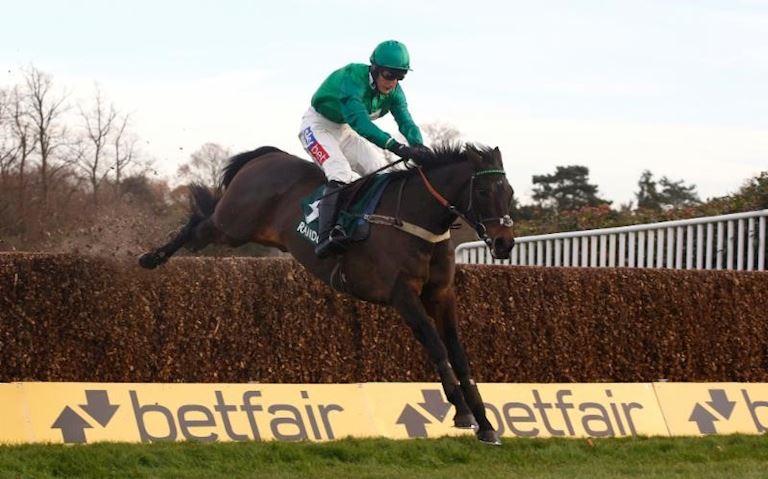 Completing the line-up is Saint Calvados (Harry Whittington/Gavin Sheehan, 6/1). The five-year-old was successful in three of his four chase outings in the 2017/18 campaign and returned to action with an impressive success in the G3 Poplar Square Chase at Naas, Ireland, on November 10.

Andrew Cooper, Head of Racing and Clerk of the Course at Sandown Park, said today: "The 2018 Betfair Tingle Creek Chase is high on quality with the field headed by Altior, who was the best two-mile chaser by some way in Britain and Ireland last season in the Anglo-Irish Jump Classifications.

"Altior's unbeaten record over fences includes three stunning successes at Sandown Park and we all look forward to seeing him here again on Saturday.

"Un De Sceaux was the second-best two-mile chaser in Britain and Ireland last season and his nine G1 wins of course include a Betfair Tingle Creek Chase.

"Sceau Royal is also a G1 winner at Sandown Park and along with recent impressive scorer Saint Calvados make up an outstanding quartet for what should be a fascinating renewal of the Betfair Tingle Creek Chase."

Betfair spokesman, Barry Orr, commented today: "There may only be the four runners in the Betfair Tingle Creek Chase but they are four of the best two-mile chasers in training and the race is chock-a-block with quality.

"Altior has been favourite since the entry stage and that won't change between now and Saturday but there has been plenty of support for the three remaining protagonists and a strong case can be made for each of them. It is a cracking renewal and looks a great betting heat."

The Betfair Tingle Creek Christmas Festival gets underway tomorrow, Friday, December 7, with a six-race programme running from 12.50pm through to 3.30pm.

Four of the 10 starters in this contest are unbeaten over hurdles including six-year-old mare Alsa Mix (Alan King/Wayne Hutchinson), successful at Exeter and Quoi De Neuf (Evan Williams/Adam Wedge), an impressive winner last time out at Aintree on November 10.

Quoi De Neuf was successful on his only start in an Irish point-to-point at Ballysteen in April before being sold to trainer Evan Williams for €180,000 at Goffs later in the same month.

Vale of Glamorgan-based Williams commented: "Quoi De Neuf has been grand since his win at Aintree. He won his race nicely there, although the form has really been franked as both the second and third from that race have both been beaten subsequently.

"Having said that, he is a horse that I like and even if he didn't beat anything, he did it very nicely at Aintree. We thought we would give it a go tomorrow. It will be softer tomorrow, but that shouldn't be a concern. He is only a four-year-old and we thought it was worth trying him with a step up in grade rather than running him with a penalty.

"It looks a competitive race at Sandown tomorrow and I would say you could give a chance to everyone."

Truckin Away (Philip Hobbs/Micheal Nolan) made the perfect start to his hurdling career when winning at Ffos Las on November 11 while Down The Highway (Emma Lavelle/Aidan Coleman) was an impressive seven-length scorer at Lingfield Park on November 13.

Declared runners for the other six races on day two of the Betfair Tingle Creek Christmas Festival, Saturday, December 8, will be known shortly after 10.00am tomorrow.

Tickets for the Betfair Tingle Creek Christmas Festival on Friday, December 7 and Saturday, December 8 are available online, by calling 0344 579 3012 or on the gate. Under 18s go free when accompanied by an adult.

The going at Sandown Park is currently:

GoingStick readings at 6.45am today:

Sandown Park is part of The Jockey Club, which stages thrilling sporting occasions including The Randox Health Grand National, The Cheltenham Festival and The Investec Derby. Millions of people every year enjoy the special experiences offered through racing, music, food and entertainment. Governed by Royal Charter, every penny made goes back into British Racing to help the sport thrive. Founded in 1750, today The Jockey Club is the largest commercial group in Britain's second-biggest spectator sport, operating 15 racecourses nationwide, The National Stud, Jockey Club Estates, Jockey Club Catering, Jockey Club Live and the charity, Racing Welfare. More information is available at www.thejockeyclub.co.uk