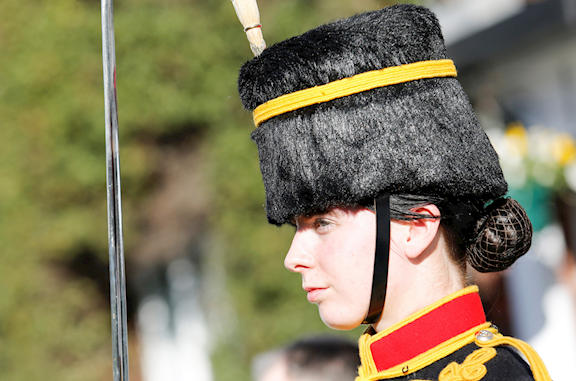 Vicki is a serving Lieutenant Commander of the Royal Navy and will be riding Shelford trained by Kevin Frost. She was delighted with 4th place in the race last year in her first ride in the military races, having intended to start her racing career earlier but was curtailed due to a serious shoulder injury in a fall in November 2014. She has competed in most areas of equestrian competition and has hunted with the Royal Artillery Hounds. She also won bronze medals in boxing, representing the Royal Navy in 2008 and 2009. Vicki recently joined the Grand Military Race Committee and is married to Lt Col Pete Sollitt, recently retired from The Royal Logistic Corps with two sons, Elliott (eight) and Harry (six).

Brodie Hampson qualifies for the race as her late father served in the Royal Artillery for 22 years. She will be riding Carlos du Fruitier for trainer Ben Pauling this Friday having previously achieved an emotional win in the race in 2016, watched by her terminally ill father who has sadly since passed away. Brodie also suffered a fractured vertebrae in a fall in June 2018 so has made an astonishing comeback to be able to ride in the feature race again.

Bombardier Grace Gostelow of The King’s Troop Royal Horse Artillery who has ridden several times in the Royal Artillery Gold Cup, is just back to riding racehorses although has not passed her BHA medical in time for this year’s race. She was injured in an accident on duty during training two weeks before the 2017 race when she chipped three vertebrae. Grace found herself unsuccessfully struggling to control a runaway gun team of six horses after the two other drivers had been thrown from their horses when a near miss with a tree resulted in her being thrown as well. Grace however will be at Sandown Park supporting what has become a tight-knit group of military riders.

Kalashnikov is one of four declared for The Grade 2 Agetur UK Kingmaker Novices' Chase at Sandown Park on Friday. The race was due to be run at Warwick last Saturday but had to be re-scheduled due to the equine influenza that halted racing over the weekend. Kalashnikov claimed victory on each of his first two starts over fences but was beaten in the (Grade 2) Wayward Lad Novices' Chase at Kempton on December 27, when last seen. The Amy Murphy trained six-year-old, who finished runner-up in the Supreme Novice hurdle at Cheltenham last year, is as short as 5-1 for the Racing Post Arkle Chase at this year’s Festival. Also set to line-up in the Grade 2 contest on Friday is Dell Oro, Glen Forsa and Dalila Du Seuil.

Sandown Park is part of The Jockey Club which stages thrilling sporting occasions including The Randox Health Grand National, The Cheltenham Festival and The Investec Derby. Millions of people every year enjoy the special experiences we offer through racing, music, food and entertainment. Governed by Royal Charter, every penny we make goes back into British Racing to help the sport thrive. We were founded in 1750 and today we are the largest commercial group in Britain’s second-biggest spectator sport, operating 15 racecourses nationwide, The National Stud, Jockey Club Estates, Jockey Club Catering, Jockey Club Live and our charity, Racing Welfare. For more information visit www.thejockeyclub.co.uk.