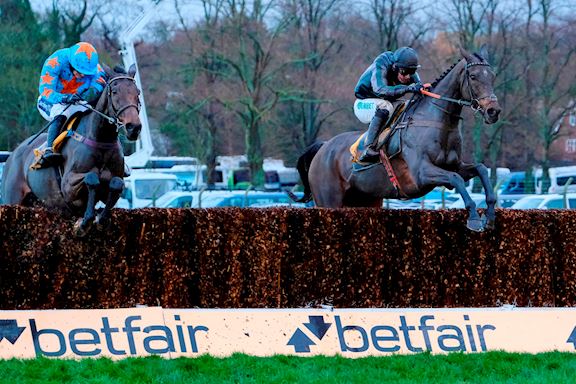 The G1 contest, run in honour of 1970s Sandown Park legend Tingle Creek, is the two-mile highlight of the first half of the Jump season and its glittering roll of honour features legends such as Desert Orchid, Viking Flagship, Moscow Flyer, Kauto Star, Master Minded and Altior.

Last season Defi Du Seuil landed two G1 novices' chases over two and a half miles - Sandown Park's Scilly Isles Novices' Chase and the JLT Novices' Chase at the Cheltenham Festival. He showed on his seasonal reappearance that two miles was no inconvenience when landing the G2 Shloer Chase at Cheltenham on November 17.

The 11-time champion Jump trainer Paul Nicholls is the most successful handler in the history of the Betfair Tingle Creek Chase, with 10 victories. His most recent win came in 2017 with Politologue (11/2), who is entered again this time around. The eight-year-old, owned by John Hales, is a dual G1 winner and went down by a length and a quarter to Defi Du Seuil at Cheltenham last month. Nicholls has also entered Dolos (16/1), who landed a handicap under 11st 7lb over the course and distance in January.

Betfair's 100/30 second favourite is Un De Sceaux. From the stable of Ireland's champion Jump trainer Willie Mullins, the 11-year-old won the Betfair Tingle Creek Chase in 2016 and was runner-up to Altior 12 months' ago. He was last seen when winning the Champion Chase at Punchestown on April 30 - his 10th victory at G1 level.

Patrick Mullins, assistant trainer to his father said today: "The plan at the moment is for Un De Sceaux to run in Saturday's Betfair Tingle Creek Chase.

"He retains all of his old enthusiasm and we couldn't be happier with him.

"Hopefully, he can run another big race on Saturday."

Sceau Royal (Alan King, 6/1) won over the course and distance on this card two years ago when taking the G1 Henry VIII Novices' Chase. He will be making his first start of the season, having been last seen when runner-up to the mighty Altior in the G1 Celebration Chase in April. The seven-year-old is one of two entries for owners Simon Munir and Isaac Souede, who could also be represented by recent G2 Haldon Gold Cup winner Janika (Nicky Henderson, 8/1).

Waiting Patiently (Ruth Jefferson, 7/1) enjoyed his finest hour when winning the G1 Betfair Ascot Chase over two miles and five furlongs in 2018, a race in which he was also runner-up in 2019 behind Cyrname.

Betfair Spokesman, Barry Orr, commented today: "Defi Du Seuil announced himself as a two-mile chaser of immense potential with a nice win from Politologue in the Shloer Chase and he is clear favourite at 13/8 with Betfair.

"But as a previous winner of the race and on 3lb better terms, all the money has been for Politologue, with punters backing him to turn the Shloer form around and land Paul Nicholls an 11th win in the race."

The seven-race programme at Sandown Park runs from 12.15pm through to 3.35pm and also features the £50,000 Betfair London National Handicap Chase (3.35pm, 23 entries) over an extended three and a half miles. The Betfair Tingle Creek Festival kicks off on Friday, December 6 with a six-race programme running from 12.45pm through to 3.30pm.

Betfair operates globally, online-only, and gives online sports betting customers an unparalleled offer with its market-leading Exchange and Sportsbook providing consistent value, choice and innovation. Betfair is well known for its partnerships within Sport, both in the UK and Europe, and offer customers leading insight through our wide range of ambassadors.