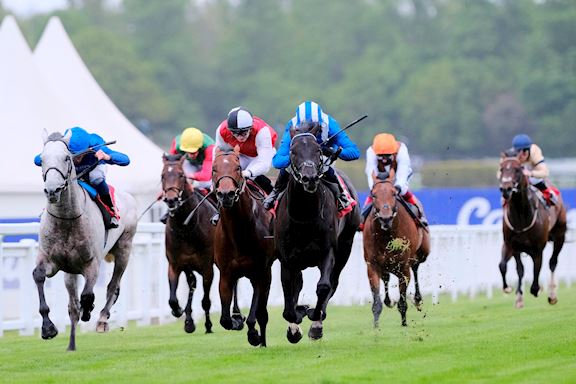 By Ben Cox and Graham Clark

This new initiative is staged by The Jockey Club in conjunction with the Thoroughbred Breeders’ Association and takes place during National Racehorse Week (September 12th-19th).

It will provide racegoers with a unique insight into the breeding industry, with competitions, interactive displays, a QR code trail, a retired racehorse parade, interviews with breeders, give-aways and trade stands.

There will also be opportunities to learn about shared ownership options and how to get involved in thoroughbred breeding, while students and those considering a career change can learn about The National Stud's 'Entry for Stud Employment' programme, which trains people for roles in the industry.

Each race at Sandown Park tomorrow will be sponsored by an organisation from within the bloodstock industry - namely Whitsbury Manor Stud, the National Stud, Blandford Bloodstock, Coln Valley Stud, Highclere and Barton Stud - with additional prizes for the breeder of each winner. The National Trainer’s Federation (NTF) is also supporting Breeders’ Day and will present its Lycetts Team and Championship Awards to nominated yards during the course of the afternoon.

The headline contest is the Listed Chasemore Farm Fortune Stakes, staged over a mile for three year olds and upwards. Chasemore Farm is located in close proximity to Sandown Park at Downside, Cobham, and is the breeding operation established by Betfair founder Andrew Black and his wife Jane back in 2007.

Explaining how he became interested in breeding and extending his support to Breeders’ Day, Andrew Black said:  “I came into it from a betting perspective really, which seems odd. I’ve always been a punter and that’s been my interest in racehorses. I think analysing and deciding which horses to back is a similar sort of thought process to deciding which horse to mate with which other horse.

“I think, for me, it’s mostly about the matings because that is the one area where I have a real input because everything else is handled by other people. Obviously, I don’t have a great deal of involvement in it other than I walk through the farm every day and I watch the horses growing up and I take a great deal of pleasure in that.

“You plan out a mating and watch the horse grow up, thinking is this going to be the animal I wanted it to be? Is this the animal that I intended to breed? Asking yourself, ‘are we going to keep this one or are we going to sell it?’ and so on and so forth. So, yes, for me, it is that mating but it’s just watching these beautiful animals grow up year in, year out.

“I never stop trying to understand the animals here - what they are, what they can be, what we can learn from them about the other progeny and their brothers and sisters to come. For me, it’s seeing an animal you bred winning a big race - that is just as good as it gets.”

Black’s great hope is that by further understanding horses’ breeding, racegoers and fans of the sport will have a deeper connection with racing.

He explained: “I think that if punters in particular are going to have a deeper experience on the racetrack, I think it’s going to be because they are digging deeper into the breeding aspects of the horses that they are backing. Perhaps they will move a little bit from the things punters traditionally look at, like who is the trainer and who is the jockey, and just get more into the pedigree. I thinking promoting those things is good for racing in general.

Jane Black added: “It’s great for us to be involved with the Sandown Breeders’ Day because we sponsor the owners and trainers facilities there. It’s our local course, we go there a lot, have a box there and so it’s a great opportunity to promote breeding to the wider racing industry.

“From the beginning, from when you discuss the matings, then you have the foaling and then just watching their development really. Then it’s getting them ready for the sales and the excitement of what’s going to happen then.

“Our big mare was Ceiling Kitty and so we there to see her win at Royal Ascot (the Group Two Queen Mary Stakes in 2012) and then, of course, a few years down the line her last foal also won there (Arthur Kitt in the 2018 Listed Chesham Stakes) so it’s just great to see what all the family do.

“I think breeding doesn’t get an awful lot of exposure in the same way that the racing yards do. It’s a really interesting part of the industry and I think if the wider audience learned a little bit more about it then I think it would only be good for racing.”

Trainers assess their chances in the Chasemore Farm Fortune Stakes

“The seven furlongs at York was probably a bit too sharp for him and this looks a good opportunity for him dropping down to Listed level. He ran a blinder at Salisbury and he ran very well at Royal Ascot. Hopefully with a bit of luck in running, he can make the most of this opportunity.

“I do think he is better over straight tracks and that is the only concern but he has got a good draw and Oisin (Murphy) can put him where he wants. Oisin gets on really well with him. He deserves to win and hopefully Wednesday will be his day. There is a bit of rain forecast. Though he wouldn’t want it too soft, he has run well on soft ground before. Just on the easy side of good would be perfect.”

“The step back up to a mile will suit Rhoscolyn as will any rain that falls and he seems in good form. He has already had a grand season and given that he is only three there could easily still be improving so there might be more to come. Escobar has got some very good form to his name at Sandown in handicaps when lumping around big weights.

“He ran well last time in a good handicap and wasn’t beaten far so he appears in good shape. He is a very classy horse on his day. Both horses are quite different in that Escobar likes to be held up where as you can sit handy on Rhoscolyn. There was nothing between them when they ran over a mile at Goodwood and it could be the same again.”

“I’m looking forward to running him in the Fortune Stakes. He is in good form and he looks well. He is not a horse whose work is particularly flash but he worked well 10 days ago on the grass and he did a nice little bit at the weekend as well.

“There was a combination of reasons why he hasn’t run since Royal Ascot. We felt that this race would really suit him and that it was worth waiting for and he has various other options through the autumn. The Darley Stakes could well be for him after this, given how well he showed up on the Rowley Mile in the spring. His Heron Stakes run was good form.

“Unfortunately it didn’t work out in the St James’s Palace Stakes. He was pushed wide and it was difficult for him to get into any kind of rhythm and perhaps he wasn’t quite up to that grade. He is swimming in shallower waters here and that will suit him really well.”