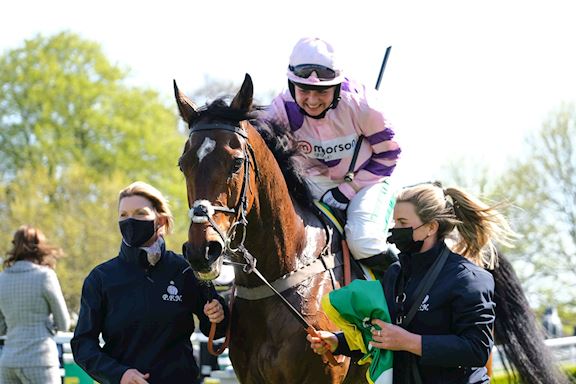 Greaneteen, who tasted Grade One glory in the Celebration Chase on the last day of the season at Sandown Park in April, is being readied for the Betfair Tingle Creek Chase on Saturday 4 December by 12 times Champion Trainer Paul Nicholls.

In lowering the colours of Altior and having Champion Chase winner Put The Kettle On well behind him in the Celebration Chase, Greaneteen already showed he can compete against the very best, but his trainer believes the could be even more to come from the seven year old.

“What an improved horse he is from two years ago when he started jumping fences off 132," Nicholls said. "He has just progressed and we thought the Haldon Gold Cup would be good for him last season and he won that well.

“He is now 168 having improved again in the spring. He ran very well in the Champion Chase not beaten very far (beaten two lengths when finishing fourth), where I wish we made more use of him.

“He ran very well at Sandown where they went flat out and he relaxed. The biggest thing with him is getting him relaxed.

“When he ran in the Game Spirit he ran too fresh and too keen and didn’t finish. I’m going to run him in the Haldon Gold Cup as a prep for the Tingle Creek.

“He will run off his merits but off 168 winning the Haldon Gold Cup he would want to be very special. You need a prep for the Tingle Creek and that is his race. Hopefully, he can improve again.”

But Greaneteen may not be the only horse travelling to Sandown Park from Nicholls' Ditcheat base, as the option is very much open for dual winner Politologue.

Having secured a second Betfair Tingle Creek at Sandown in December, Politologue ended last season on a low key note when a well-beaten fourth in the Marsh Chase at Aintree. However, Nicholls is confident the popular grey can bounce back this term.

He said: “He is 10 going on 11 but he is still as enthusiastic as ever. He won the Tingle Creek last year but it is looking even stronger on paper this year.

“The other option is to go for the Shloer Chase at Cheltenham as he loves it there and the then Desert Orchid at Kempton. We would then give him a nice break and go fresh to Cheltenham. That is one option to do those three.

“He would be ready to run in a month’s time. He had that bleed in the saddling boxes at Cheltenham last year but we played safe with him.

“To get him right for Aintree from Cheltenham didn’t suit him but he strikes me as being as good as ever.

“John (Hales, owner) was going to retire him but his daughter Lisa, like me, has seen that he still has that enthusiasm. I bet he will run a blinder first time out.”