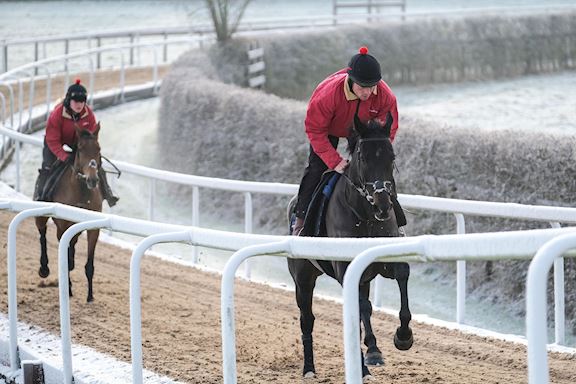 Third Time Lucki will attempt to maintain his unbeaten record over fences by following in the hoofprints of stablemate Allmankind when bidding to give Skelton back-to-back wins in the Grade One Close Brothers Henry VIII Novices’ Chase on the same card.

After making a winning chasing debut at Cheltenham in October the Arcadio gelding followed it up back over course and distance earlier this month in the Grade Two From The Horse’s Mouth Podcast Novices’ Chase.

Skelton said: “Third Time Lucki definitely goes to Sandown on Saturday for the Henry VIII Novices’ Chase. He worked on Saturday and he appears in top form.

“He is leading the ranks in the two-mile novice chase division and the ground will be in his favour so he has got to go.

“I always thought he would be very good and I’m delighted it is proving that way. He loves his fences and that has been the making of him.”

While the margin of Third Time Lucki’s most recent success was not as decisive as his first victory over fences, Skelton believes both displays were equally satisfying.

Skelton added: “I wouldn’t rate either of his performances at Cheltenham as one being better than the other.

“I think the second performance might have been downplayed as Harry was cautious over the last three fences. Make no mistake he put the race to bed and there was no need to be overly aggressive on him.”