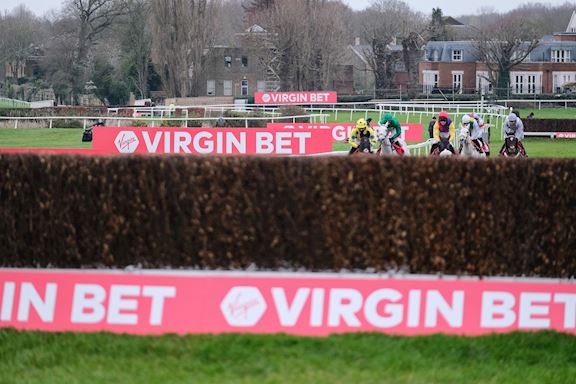 Charlie Deutsch admits it would be a “dream fulfilled” if he could secure a first Grade One success aboard L’Homme Presse in the Virgin Bet Scilly Isles Novices’ Chase at Sandown Park on Saturday, just days after the tragic death of his godfather.

The 25 year old jockey hopes to land his first victory at the highest level aboard the Venetia Williams-trained gelding in the two and a half mile feature race, which he is currently even money favourite for with race sponsors Virgin Bet.

L’Homme Presse thrust himself into the limelight on his most recent start when following up victories at Exeter and Ascot with an impressive success in the Grade Two Paddy Power Novices’ Chase, better known as The Dipper, at Cheltenham on New Year’s Day.

However, victory this weekend for L’Homme Presse would be one tinged with sadness for the Gloucestershire-based rider, whose godfather Marcus Evans was killed in a road traffic accident near his home in Evesham last week.

The 55 year old, who was a regular racegoer at Cheltenham, passed away on Thursday night and Deutsch said: “I’ve never lost someone so close to me before. He was such a huge part of our family. He helped bring me up and he really supported my racing.

“Only the night before it happened he was asking about tickets for Cheltenham on the Saturday. Every weekend he would be over and he has known me and my brother Rollo all our lives.

“He would ring me almost every day after racing. It is just such a shock really. He was almost like an older brother.

“He would always phone up before a weekend to talk about the horses I was riding. He was obsessed with all sport, especially cricket and football, but he loved racing so much.

“He was loving how my season was going as he really rode off the back of it. He was always the optimist and would always say ‘next season will be better than the last one’.

“It would be a dream fulfilled to win a Grade One but Marcus was a great character who will be missed.”

Deutsch is unbeaten in three starts aboard L’Homme Presse, who is one of six entries received for Saturday’s race, but he admits he was a little unsure of what to expect from the Diamond Boy gelding on his chasing debut at Exeter in December.

He explained: “I had an idea he was a nice horse from his hurdle runs but I didn’t ride him over hurdles. He doesn’t show a huge amount at home but he had schooled very well before Exeter.

“Like a lot of novice chasers I was just keen on giving him a clear view of his fences as he has got a big stride.

“I didn’t think he would be the quickest around there so I wanted to have him handy turning in, but he stayed on very well up the straight. I was really impressed that day and his jumping was superb.

“At Ascot I wanted to give him a bit of light and I hoped to get a lead but he travelled so well I ended up in the lead coming out of Swinley Bottom. It was all very straightforward and he was very impressive again.

“The Dipper was when it started to become really exciting. He was backing off early on in the race for whatever reason. He then got into a nice rhythm and started jumping a lot better, having been cautious early on.

“The last three fences I wound him up and asked for an effort and he flew over the last three. It was just quite easy for him. It is a nice feeling on a horse that has got a stride like he has as you don’t feel like you are going fast when you actually probably are.”

Given his style of racing, Deutsch is confident that L’Homme Presse will be well suited to the chase track at Sandown Park on what will be his first start at the course since finishing sixth there in a handicap hurdle on the final day of last season.

He said: “I’ve not ridden him since The Dipper but from what I’ve seen he seems okay at home - I’m very much looking forward to getting back on him on Saturday.

“If he has jumped around Cheltenham it should be quite forward for him at Sandown.

“There is the downhill fence as you go away from home that’s a bit difficult while all the Railway Fences and ones down the back take a bit of jumping.

“I don’t see why it won’t be his sort of test. It will be hard work at the end but we know he stays really well.”

Needing just eight victories to equal his previous best total of 38 winners, which he set last season, Deutsch hopes he can take another step forward this weekend to not only eclipsing that tally but reaching a half century of winners for the first time in his career.

He said: “I was hoping and wishing for a good season and in terms of big race winners it is better than my previous one, but you just have to keep finding the right horses.

“I’m very much looking forward to getting past 38 winners and I’d love to ride 50 winners in a season as I’ve always said my whole career I’d love to do that.

“It has been really good so far and if it carries on like it has been going until the end of the season I will be pinching myself.”