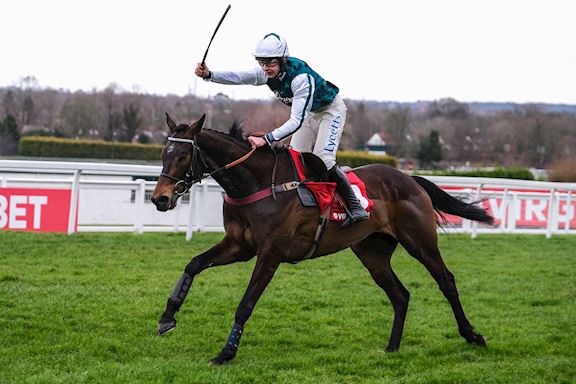 Charlie Deutsch enjoyed a day to remember when recording the first Grade One victory of his career aboard L’Homme Presse in the Virgin Scilly Isles Novices’ Chase at Sandown Park this afternoon.

The 25 year old jockey did not really have any concern aboard the Venetia Williams-trained 8-13 Favourite, who jumped superbly throughout. Always up with the pace, the seven year old pulled well clear of his rivals approaching the second last before going on to score by 21 lengths from Mister Coffey.

Deutsch said: “It is wonderful. You need the good horses to come along and give you those Grade Ones. It can sometimes never happen for a jockey but for it to have happened is just brilliant. We have a brilliant horse on our hands. It is just great.

“This means a huge amount to me as Grade One wins seemed a long way off but when you get the right horse they are not a long way off.

“I think Pic D’Orhy kind of disappeared out of the back straight and then the loose horse was our main worry then but he has got such a great attitude that when he is on his own that he jumps very well.

“He liked the track as it is a nice galloping track. He is an easy ride and that makes the job easier as well.

“It was a lovely moment seeing all the jockeys on the podium and I didn’t expect it all. They are a great bunch of guys and it means a huge amount to me they all came out.”

He said: “Other people didn’t know Marcus like me but he was a wonderful person.

“He would have been here hollering. He would have been in the winner’s enclosure early jumping out of his shoes. Hopefully he is looking down and he will be jumping for joy. It is really special I just wish he could have seen it.”

The jockey went on to express his gratitude for trainer Venetia Williams.

He concluded: “It is really special to win my first Grade One for someone who has supported me for so long. It is my seventh season there and it means everything to do it for the team.”

Williams, who was saddling the eighth Grade One winner of her career and the first since Golden Goal in the 2002 Scilly Isles Novices’ Chase, said: “It was great. Paul’s horse (Pic D'Orhy) probably didn’t jump as well as he would have liked which put the race to bed quite quickly I think.

“I think Pic D’Orhy was struggling a bit by the Railway Fences with his jumping but I’m sure he had plenty of petrol left in the tank. Sandown has always been a good test of jumping and that is what you have got to do.

“I’m always looking at what scalps has he got in the cupboard and what has he beaten up until this point. You can easily tone down your expectations if you look at it from that point of view.

“With this horse I was surprised he was odds-on favourite but it is the manner of his jumping and the way that he has done it gives everybody optimism.

“You know I’m not one for pipedreams. I wouldn’t have even thought about this on his chasing debut as all you think about is the next race. It is always one step at a time.

“There is no point of thinking of alternatives apart of Cheltenham. In those days when I had the likes of Teeton Mill and Lady Rebecca, I had only been training five minutes and though everyone has been kind with their comments this season when I look back to those days we were having 70, 80 or even 90 winners every year, I now think blimey how did we do that? I think the world of racing is a more competitive stage.

“It is nice to have a Grade One winner in the race that our last one was in which was embarrassingly a long time ago.”

Williams confirmed that the Grade One Turners Novices’ Chase at The Festival is now the target for L’Homme Presse. Betfair and Paddy Power reacted by making him 11-2 (from 8-1) for the 2m 4f contest at Cheltenham on March 17th.

“You are not going to change recipe (regarding trip at Cheltenham) unless you have a real need to do so.

“It was very well deserved for Charlie.”