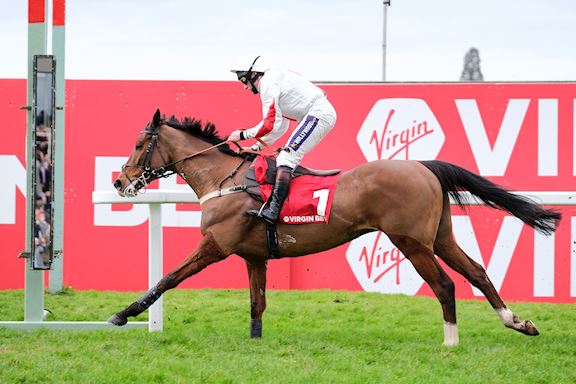 Owner Steven Packham admitted he was delighted to see Goshen give his loyal army of fans plenty to shout about after securing what he described as an “unbelievable” success in the Virgin Bet Contenders Hurdle at Sandown Park today.

Life for the Gary Moore-trained six year old has been anything but straightforward since running out an emphatic winner of last year’s Grade Two Kingwell Hurdle at Wincanton. However, he served a reminder to everyone what he remains capable of with a commanding victory in the 2m Listed prize under Jamie Moore.

Tracking early pace setter Global Citizen, the 11-5 joint favourite, who unseated at the final flight when holding a commanding advantage in the 2020 JCB Triumph Hurdle at the The Festival™, soon pressed on down before the second last much to the delight of most of those in the stands.

After meeting the last two hurdles well, the Authorized gelding bounded clear late on to score by 15 lengths and complete a 3.6-1 double for the Lower Beeding handler.

Packham said: “It was unbelievable. It was brilliant for the horse. Everyone knows what happened at Cheltenham but I still think from that he has got lots of fans that still want to follow him.

“I’m delighted as well but I’m just pleased for the horse. It was incredible when he jumped the second last as the noise was amazing. It just proved people like him and that what happened at Cheltenham happened.

“He has obviously got the ability but he has to go right-handed. I’d probably say he won’t go for the Champion Hurdle.”

As for winning trainer Moore, he was quick to point out that a return to a right handed track and soft ground were key in helping Goshen return to form.

Moore said: “It makes a big difference, being on a right-handed track, and so does soft ground which it is out there and it suited him. That shuts a lot of people up. They keep knocking him all the time.

“He turns up every time but he has got to have everything in his favour. He got that today and he showed how good he is. It was perfect he had a horse going on so he didn’t have to do all his own donkey work but Jamie said he was flat out anyway.

“Hopefully we can get some rain for Wincanton and that is where he will go next. The only place I might run him once in is the National Spirit at Fontwell, as although that is left-handed he has won around there. It won’t be my decision and if it is up to me he won’t go to Cheltenham.

“He went to Punchestown last year and ran behind Honeysuckle. The ground went good and that didn’t suit him. I wouldn’t be made keen to go back but we will make the entry and if it does go soft we might give it a go.”

Jockey Josh Moore insisted it was good to get one “under the belt” after celebrating his first winner since returning from injury with victory aboard the exciting Shallwehaveonemore to glory in the opening Virgin Bet Novices’ Hurdle (2m).

The 29 year old, who fractured a vertebrae and broke several ribs following a fall at Plumpton in October, was all smiles following his facile success aboard the Authorized gelding, who is kick started Grade One-winning trainer Moore’s double.

Sent straight into the lead by Moore the 4-9 favourite, who finished fourth over course and distance in last month’s Grade One Tolworth Hurdle, put in a near exemplary round of jumping before crossing the line 20 lengths clear of Grandeur D’Aime.

The winning rider said: “It was good to get one under the belt. There wasn’t any pace in the race so we thought there was no point fighting a losing battle in behind.

“He settled quite well in front. I was a bit worried if he would fall in a hole up the straight but luckily he maintained it.

“He was one of the horses I motivated myself to get back for as I thought a lot of him when I won a bumper on him last year. It hasn’t gone quite right for him yet but hopefully he can get on the right path now.”

Having suffered a catalogue of injuries during his career the Grade One-winning rider admitted his latest injury, which required him to undergo a six-hour operation along with having metal rods inserted into his back, has been the toughest to come back from.

He said: “It was the one injury that probablyghg hit me the most physically. It was the column of your body and you rely on it so much more than when you break a leg or shoulder as you can get on with them quickly.

“When I was in hospital and the doctor said don’t move, it hits you all of a sudden. It was one injury I wouldn’t want again.”

Gary Moore added: “He is a horse I hold in quite high regard he has done it well and he couldn’t have done it any easier. I do feel he is a horse that will be better in a strong run race and come off a pace but we had to do it that way today as he can be free.

“The first start (that he got beaten) was probably my fault but he probably bumped into a decent horse then in the Tolworth the ground was too heavy. If you watch him today he is a good moving horse.

“It was always the plan to go to the Dovecote and if he comes out of that race healthy he will go to Kempton. It will be very much down to how he performs there if he goes to Cheltenham.

The old adage of horses for courses is starting to apply to Dolos, who took advantage of slide down the weights to register a third Sandown Park success in the Virgin Bet Handicap Chase (2m).

Having filled the runner-up spot 12 months ago, just as he did in the 2018 renewal, the Paul Nicholls-trained nine year old ended his lengthy losing streak when adding to his 2019 and 2020 victories in the race after defeating Frero Banbou by four lengths.

Nicholls said of the 10-1 winner: “He has run ordinary all season and come down in the weights because of that but he seems 10lbs better around here than anywhere else.

“They always tend to go quite quick around here and it suits him. As we have been a little bit out of form he was probably twice the price he should have been. I think Johnny (de la Hey) owner had a bit on him at a nice price

“I’ve always fancied taking him to Punchestown in April. If there is a good two mile handicap out there that would suit him.”