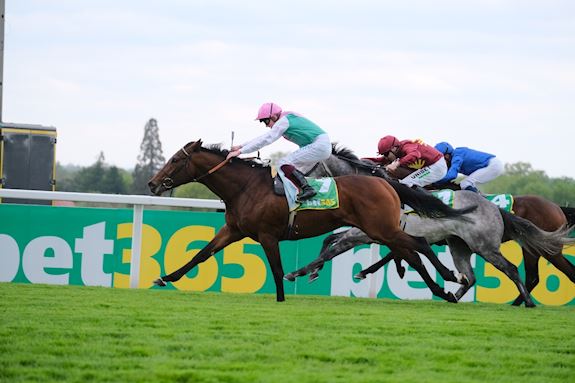 Paul Nicholls, crowned Champion Jump Trainer for the 13th time at the start of the afternoon and his stable jockey Harry Cobden brought up an 18-1 treble on bet365 Jump Finale when Greaneteen (11/8 Favourite) landed the Grade One bet365 Celebration Chase for the second year in succession.

In front from the fourth fence, the eight year old went clear approaching the last to go on and score by a comfortable 12 lengths from Sceau Royal (5-1), with a further three lengths back to Nube Negra (6-4) in third.

Nicholls said: “Harry said that is a proper horse. He doesn’t get the credit he deserves. He has won a Tingle Creek and two of these now. On his day he is very good. That was awesome.

“The ground was too soft in Ireland and he is probably not a February type of horse. He is good in the spring and autumn though he did get an injury to his eye out there as some mud hit him in the eye and he had three weeks in the vets afterwards.

“He is going Monday to have surgery on his eye to remove an ulcer. It is minor but it has got to be done. We knew he was ready for today though. They go an end to end gallop here and he keeps on galloping. You have to jump around here which he does and he stays on strong.

“Harry was really impressed with him today and he seems to keep on improving. He never gets the credit he deserves. He is a very smart horse on his day. Everyone keeps making excuses for the others (in the division) but he keeps winning and this track suits him.

“The Tingle Creek will be a target next season and this will be afterwards. These races offer good prize money. Whether Cheltenham quite suits him, I don’t know but he was only beaten two lengths in the Champion Chase last year.”

Harry Cobden said: “Last year I was sat at home watching this race with a broken cheek and a fractured hand so it wasn’t all that exciting. I’m appreciating these wins much more than when I was 18. These good days don’t come around very often so when they do we have to enjoy them.

“Lorcan (Williams on Rouge Vif) was going to make the running but he was flat out after the fast and I didn’t think we were going fast enough. I jumped the one going down the hill and I said let me on and leave me at it as he wants an end to end gallop.

“I knew Nube Negra would do us for toe up the straight so you have to be aware of these situations and thankfully it worked. The good ground here has definitely helped him today.”

Alan King, trainer of runner-up Sceau Royal, said: “He was terrific again, anything better than third was going to be a result and he just never lets you down.

“It’s been a long season and he hasn’t missed much and we always knew he was a touch better going left-handed, but I’m thrilled with that. He’ll have a good holiday now.”

Dan Skelton, trainer of the third Nube Negra, said: “We were under pressure going to the Pond Fence and I’d like to have been on the bridle longer than that, but it’s been a long season and I take my hat off to the winner. Another masterful training performance from Paul to be fifth of five in Ireland 11 weeks ago and then do that – that’s why he’s so hard to bloody beat!

“I’m happy with our horse and he’s given us another good run, it’s proving hard to win a Grade One but it won’t stop us trying. We’ll give him a good holiday and I would think that we’ll probably go Shloer, Kempton and another crack at the Champion Chase. When he’s fresh he’s very good and he’s just never really excelled here.”