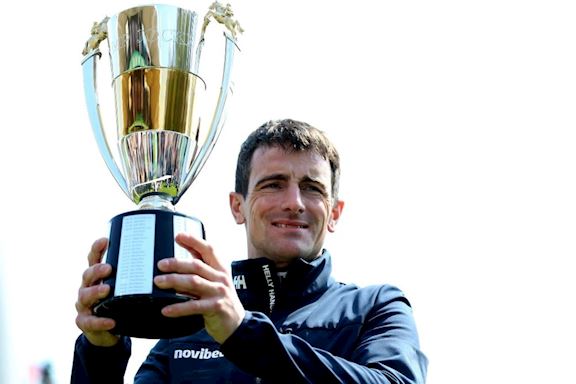 Presented with his trophy by Richard Hammond of Top Gear and The Grand Tour and his wife Mindy, Hughes was joined on the podium by his wife Lucy and children Rory (5) and Olivia (3).

The 36 year-old previously took the title back in the 2019/20 campaign and on Wednesday (20th April) this week reached the milestone of 200 winners for the season – a feat only previously achieved by Peter Scudamore, Sir AP McCoy and Richard Johnson. This time around Hughes has taken the title by a distance – with his 204 successes so far being 99 winners clear of his closest pursuer Sam Twiston-Davies.

Hughes said: “It is something at the start of the season I set out to try and do and it is great that it has come.

“I’ve never thought it was signed and sealed and I never wanted to let any sort of complacency set in. I just wanted to keep my head down and keep doing what I have done all season, so I haven’t ever accepted that it was happening until it did.”

Hughes continued: “Losing the title last season definitely made me hungry to win it back this season. No one likes to lose at anything and it hurt a lot last year to lead most of the way and then get beat in the last few weeks.

“Not because it was by Harry, as me and Harry get on great, it was just getting beaten by anyone. I set off this season even more determined than I ever have been to make sure I could do everything in my power to leave no stone unturned and try my best.

“I had to accept losing the title. There are two ways you can look it. You can sulk about it and let it get on top of you but I refused to do that. I turned it around on its head and used it as fuel to push me even harder. It made me a stronger person. “

The COVID-19 pandemic meant that there was no ceremony for Hughes’ first title two years ago but today he was able to be joined by his family, including sisters who have travelled from as far afield as Australia and Canada.

He said: “I wasn’t really bothered by any celebrations at the time (of my first championship win). I’m not really one that wants a fanfare or my name in lights so it didn’t really bother me. At the time we didn’t know what we were dealing with in regards to Covid. At the time there was a lot of people losing their lives on a daily basis and I suppose it was fairly insignificant who was champion jockey and who wasn’t at the time.

“My wife supports me fully as do my parents and her parents. Without them I would find the job incredibly hard. I’ve a lot of people around me to help me do what I do. It is not just a one man band.”

On being only the fourth Jump jockey to reach 200 winners in a season, Hughes said: “It was only over the last month that reaching the 200 winners came on my mind. It wasn’t something I set out at the start of the season. To get to that number of winners is quite a lot and for the last few weeks I was really focussed on reaching that number.

“Given the right ammunition people can train and ride the winners in the north just as good as their southern counterparts. Hopefully this is a boost for northern racing. It is all about the big owners and where they choose to have their horses. Hopefully some will be situated in the north.”

The jockey was also keen to pay tribute to pay tribute to his biggest supporter, Cheshire-based Donald McCain, who himself recorded seasonal best tally (155 winners going into today), and all the other trainers who have supported him.

Hughes continued: “Donald’s stable is growing by the day and hopefully it can continuing getting back to where it once was. He is a brilliant trainer. He has a great team of people that work behind him and a great team of owners that have really got behind the yard and invested the money in new and fresher stock throughout the year.

“The yard is growing by the day. Donald was training Grand National and Grade One winners long before I ever become associated with him. It was well documented he lost a lot of horses when one owner pulled out but it’s all credit to him that he has rebuilt his team.

“He has been a big part of this as I’ve had over 100 winners for him. To get this figure wouldn’t have been possible without Donald and his team.

“This game is not about one person. It is not like you are an athlete and you are running when it is all about you. When you are dealing with animals it is all about the people who look after them.

“Nicky Richards, Charlie Longsdon, Brian Ellison, Keith Dalgleish have all been big supporters as well but I’ve ridden winners for more than 30 different trainers this season. Each and everyone of them have helped me achieve this goal.

“I appreciate the support they give me along with the owners while my agent does a brilliant job in keeping everyone happy.

“When you are riding winners you enjoy them all. Obviously Minella Drama won a Grade Two at Haydock which was great and he should be a nice horse going forwards and Barrichello and winning the Premier Chase at Kelso aboard Nuts Well was good.

“Minella Trump winning seven races was a big part of helping me towards the title and there have been a few others of Donald’s and Nicky’s that have built up sequences and for me that is a big part of it as well.

“A week in this game is a long time and you never know what is around the corner. I’d like to try and win the title as many times as I can but without all the other variables I’ve mentioned it is not achievable. You need a bit of luck and you need to stay fit and healthy. I will try my best again next season and see how we get on. There is no point putting a number on how many titles I want to win. I like to set shorter term goals as I think when targets are so far away you lose track of them.”

With no Jump racing now for a week, Hughes has time for a short respite but remains as focused as ever.

He concluded: “We are going away for a few nights in that week we have off with the kids up to Northumberland in a lodge by the beach but then the season starts going again so I will back on it again.

“It will be good to get away for a few nights.

“May and June are quite busy months in the north then it quiets down a bit. I’m quite use to have the short turnaround as I’ve been getting a large number of rides for a good few seasons now so you get used to it and you know how to handle it.” 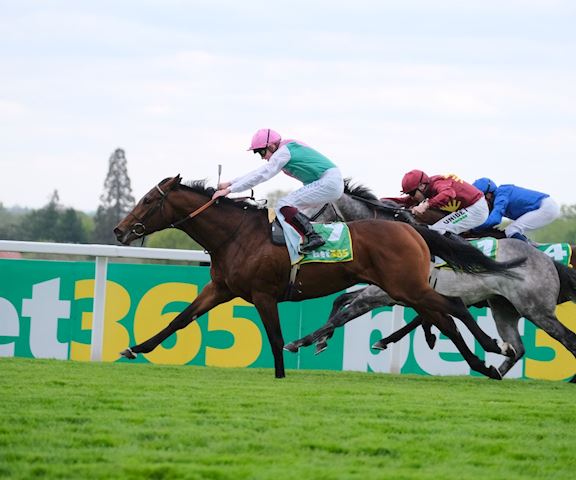